The Asus ROG Maximus Hero (WiFi) line has been the bedrock of HEXUS test systems in recent years. The Z370 X model, reviewed in 2017, became the backbone of our Intel 2018 test systems that have worked flawlessly for the last two years.

A new Maximus Hero is therefore of particular interest to us. In concert with the release of 10th Gen Core CPUs, Asus has duly updated the Z490 range to the XII Hero in for review today. 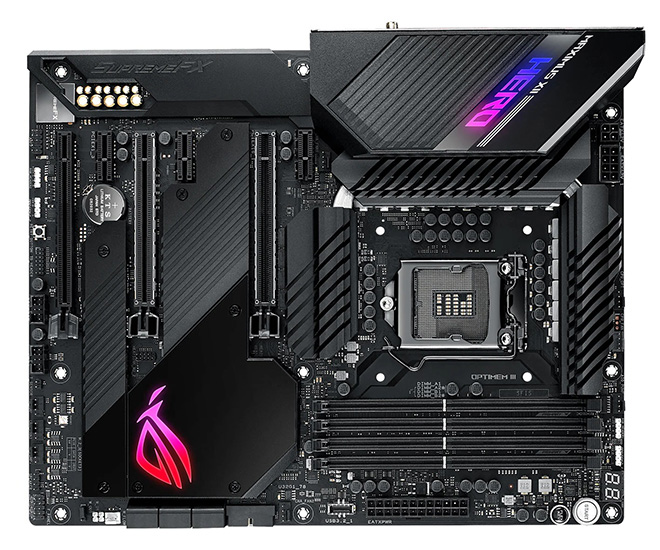 Asus continues the industry trend of having a large integrated I/O shield and significant cooling around the VRMs and PCH/M.2 slots. Three interconnected heatsinks comprise a C-shaped cooling solution around the processor socket. Underneath resides a 14-phase supply for the CPU, plus a further two for the SoC. Offering Infineon TDA21490 60A stages in a teamed mode favoured by the motherboard giant of late, which gets rid of traditional doublers, an ASP1405 controller, present on all Maximus XII boards, brings immediate familiarity to proceedings. As usual, you won't surpass the board's delivery potential without crazy cooling.

As an example, running a Core i9-10900K at an all-core 5.1GHz and 1.35V, which is the fastest stable speed any Z490 we've tested can do, translates to around 280W of package power, or in the region of 200A. That figure is less than 25 per cent of the board's capacity. Really, any Z490 board ought to handle that kind of current-draw with ease.

Getting past that, we'd prefer the debug display to be a bit further to the left because it can be obscured by a top-mounted radiator. The same goes for the power button, as well. Everything else makes sense in terms of placement, though Asus finds no room or need for a second BIOS. 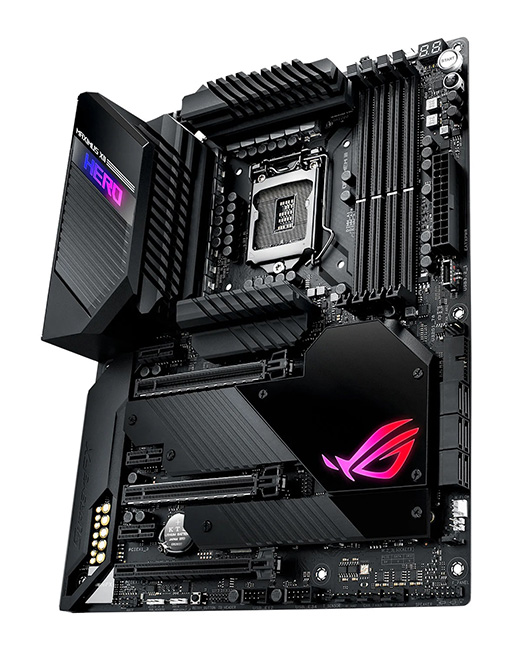 Having that C-shaped heatsink between the socket and primary PCIe x16 is also good for layout as the graphics card has room to breathe. The one minor downside to this arrangement is that getting access to the two M.2 slots sandwiched between the dual x16 requires undoing seven screws - four from the large heatsink and three from the translucent plastic cover on top of the PCH's heatsink. While we're at it, having open-ended PCIe x1 slots is verging on pointless when the M.2 cooling is in place; there's nowhere for larger expansion cards to go.

The second M.2 slot only supports PCIe 3.0 while the top and bottom slots - the lower one has an individual heatsink - can also run in SATA mode. If you choose to run in this lower slot, as it is easier to get to, you lose functionality of SATA ports 5 and 6. Similarly, the second M.2 shares bandwidth with the bottom PCIe x16 (non-strengthened). Heat transfer pads are on the topside only, by the way.

Interestingly, Asus shies away from any presumed support for PCIe 4.0 drives available on upcoming CPUs, unlike rival Gigabyte, but don't be surprised to see such compatibility being announced closer to the launch of Rocket Lake-based processors.

Though there's plenty of cooling on this side, the Hero's positioning means there's no heatsink/brace on the back. Fan headers are all in sensible positions, as is the Thunderbolt expansion header, there's an 8+4-pin CPU connector far enough away from the heatsink to enable easy connection and disconnection, while the Flex button is multipurpose - it can either function as reset or be remapped in the BIOS to control the subtle Aura lighting.

Around back, Asus doesn't skimp on the number of connections. 10 USB ports is plentiful, and the Type-C and a further three red Type-A ports offer 10Gbps. It's disappointing not to see the fastest 2x2 (20Gbps) support here. It appears you need to step up to the £850 Extreme to gain such functionality, because even the regular Gaming F, G and H models don't feature it. WiFi is provided by the latest AX201 controller. It's interesting that the Hero goes for a halfway house on the second LAN, which is a 5G solution from Marvell. The bundle also includes a small fan placed around the VRM sections for extra airflow. Is there also enough room for a DisplayPort output from the onboard VGA? We think so, and it would be our preferred choice for a modern monitor.

Being a new chipset, the Maximus XII weighs in at £430 or so, or £100 dearer than the board it replaces. The two cannot be compared directly as they're on different chipsets, of course, but such pricing puts it up against other enthusiast-orientated boards such as the MSI MEG Z490 Ace, ASRock Taichi, and Aorus Z490 Master. Gone are the days when £400 gave you best-in-class features.