Gigabyte/Aorus is coming loaded to the Intel 8th Gen Core and Z370 party with at least nine motherboards from the get go. This new Intel platform offers mainstream users six cores and 12 threads from a couple of Core i7 processors, but the salient point for companies such as Aorus is that these new chips require the Z370 motherboard - older boards simply won't work with the new CPU mojo.

This is why Z370 is construed as a big deal, and the company's stack runs from the Z370-HD3 through to, at the top end for now, the Z370 Aorus Gaming 7. We are in an ideal situation to evaluate the relative merits of the Gaming 7 because we have recently reviewed the X299 and X399 variants. 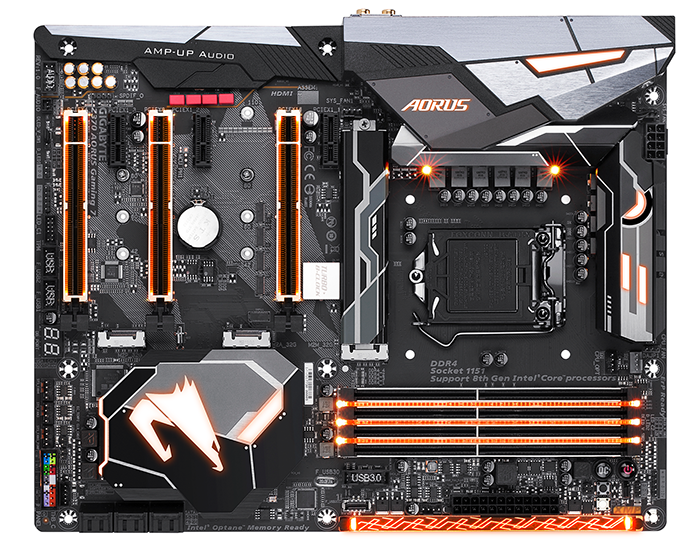 And thar she blows. Unlike most of the competition who have used their existing Z270 board and sprinkled minor specification updates in the change to Z370, Aorus takes a different tack. The Z370 version is largely unrecognisable from the Z270X Gaming 7 we also reviewed a while back, and we like what Aorus has done.

The board certainly looks cleaner than its direct predecessor. Two separate, screwed-in heatsinks sit at right angles to one another, by the CPU socket, though underneath there's one long heatpipe, covering the power delivery section. You may think that directly above this duo is another heatsink, yet this is not the case. Aorus, instead, adds a plastic shroud for reasons that will become apparent further on down the page.

Speaking of power delivery, this board has a new regulation system capable of doling out up to 60A for each of the eight phases, so 480A, or up to 3x what's available on lesser boards, the company says. Put simply, power should not be the limiting factor when overclocking Coffee Lake chips north of 5GHz.

There's a decent gap to the two CPU fan headers sandwiched between the CPU and memory, making it easier to plug in the fan should you mount a large cooler. The board sports a total of eight fan headers, with the other six dotted sensibly around the edges - three are by the pin connectors on the left. Specific ones, just like on X299, have been upgraded to cater for watercooling devices that require up to 3A of current. What's more, there are nine temperature sensor locations, too. 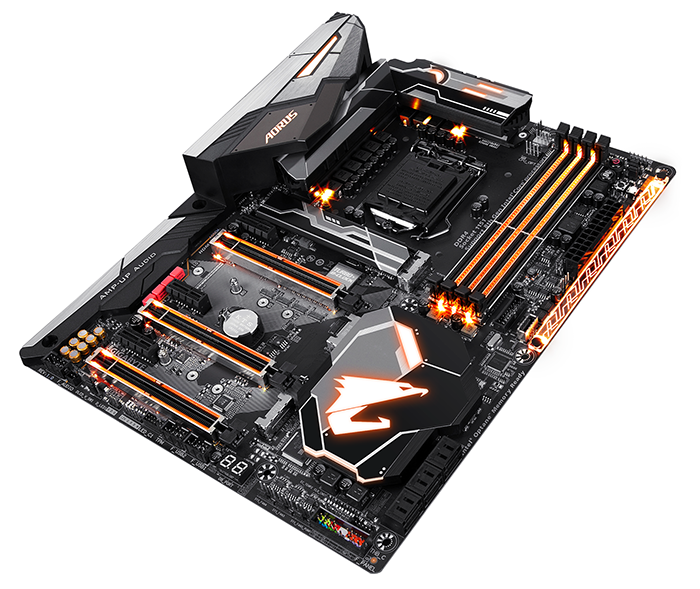 We shouldn't expect much less than the kitchen sink on this model, so Aorus duly obliges by marking off the premium checklist. There are two RGBW 5-pin headers on the left and right edges, onboard buttons and debug LCD, that swappable light strip which has become synonymous with the company, three full-length, strengthened PCIe x16 slots, three PCIe x1, and upgraded audio. However, Aorus does drop a few features in the transition. There's no U.2 connector or SATA Express, but that is no bad thing as those storage standards barely took off.

It's good to see Aorus use the ASMedia 3142 controller. There's a specific USB 3.1 Gen 2 front-panel header right next to a normal USB 3.0. M.2 slots are a must these days, so Aorus houses a trio on the Gaming 7, all capable of running NVMe PCIe Gen 3 x4 speeds, albeit not concurrently if all other slots are filled. The upper and lower slots support the extra-long 22110 form factor while the middle, sandwiched between the two primary PCIe x16, is a standard 80mm long. We reckon Aorus misses a trick by not having all three slots cooled by the Thermal Guard heatsink present near the CPU socket - after all, how much more can it cost?

There's an inevitable amount of lane juggling going on a Z370 board if you decide to go full-on and populate everything. Using an M.2 in the bottom slot means, like the drive itself, a third graphics card would run at PCIe x2. Use an M.2 in the top slot, nearest the CPU, which is most likely, and you will lose concurrent SATA ports 4 and 5 functionality, yet the middle slot remains unaffected if using a PCIe-based SSD. Surely it would have made more sense to have it at the top, covered with the heatsink? Similarly, using the third PCIe x1 means that SATA 3 is given the chop. This clearly means the X299 platform remains the best choice if you want to throw the proverbial kitchen sink of components into a build.

Aorus is also sensible in how it lays out the PCIe x16 slots. There's a decent gap between the first and second - both are driven by the 8th Gen CPUs at x8/x8 in a two-card combination - and the third gets its bandwidth from the Z370 southbridge.

Have we mentioned RGB lighting yet? There are four programmable zones and each can be home to one of nine effects, all controlled from within the BIOS or, with greater granularity, from RGB Fusion software optionally installed on the operating system. It's handy that each zone can have its own colour scheme, as well.

Gaming 7 supports dual Gigabit LAN ports from Intel and Rivet Networks Killer E2500, respectively, though no teaming is present. There's also no WiFi on this model, which is a shame, but a couple of Z370 boards in the stable do support it - Gaming 5 and the appropriately named Z370N-WiFi.

Most of Aorus' Z370 board carry either the ALC892 or more premium ALC1220 audio codec. The Gaming 7 is the only one to pair the ALC1220 with an ESS Sabre 9018Q2C audio DAC and AMP for improved performance.

There's HDMI and DisplayPort video outputs, USB 3.1 Gen 2 via both Type-C and Type-A connectors, but what is conspicuous by its absence is support for Thunderbolt 3 through Type-C - a feature present on the Z270X Gaming 7. Instead, Aorus offers support via an add-in card connector.

Coming back to the shroud, the reason for its presence is due to Aorus installing a 60mm Everflow fan that spins up to a full-on 6,000rpm if the VRM temperature exceeds 90°C, likely only if overclocking to 5GHz and beyond. There's no middle ground and no possibility of stepping up the speed in a linear fashion. Of course, it shouldn't ever switch on if you run at, or near, stock speeds.

Gigabyte/Aorus has redesigned the Gaming 7 iteration to offer a sleeker, more attractive look. However, it has also removed a few features from the Z270X model and increased price from £220 to £275.