It used to be the case that anyone looking for a high-quality laptop had to go with Intel Inside. Times have changed. Rival AMD now offers compelling technology in mobile form, oftentimes beating Intel in straight-out performance whilst providing all-day battery life to boot.

The latest Ryzen 5000 Series Mobile chips find their way into an ever-increasing number of laptops, and we have already seen what the best-in-breed can do inside the Asus ROG Flow X13. It's now the turn of the lower-wattage U-series family to show its worth, and we have the premier solution, Ryzen 7 5800U, powering the Asus ZenBook UM325S. 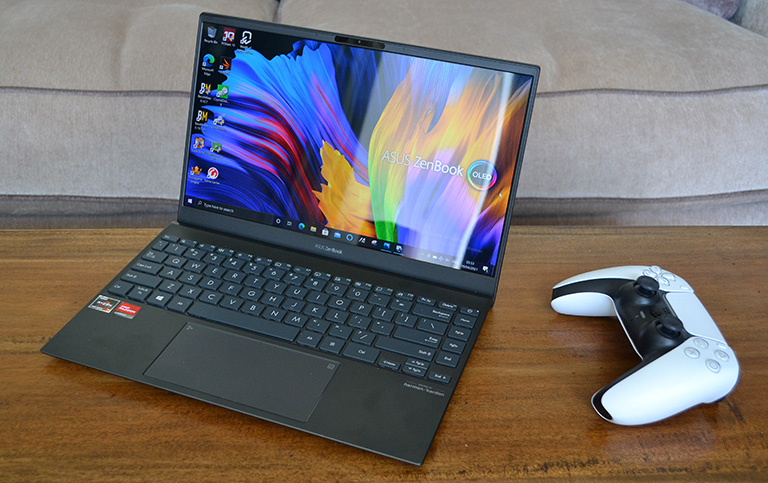 It's a nice-looking bit of kit from the off. Measuring just 304mm x 203mm x 13.9mm and weighing 1.16kg on our scales, this little powerhouse features a few headline-grabbing components. The first is a 13.3-inch FHD OLED screen, which is the solitary choice for AMD-equipped machines - Intel's comparable UX325 models have either IPS LCD or OLED. Next is provision for up to a Ryzen 7 5800U processor, offering eight Cezanne Zen 3 cores and 16 threads, alongside integrated graphics, in a restrained TDP. Asus also offers lower specifications with either Ryzen 5600U, 5700U, or 5500U, though do be aware the latter duo is based on older Zen 2 tech wrapped inside what AMD calls the Lucienne platform. Confusing, huh?

On the outside, Asus does a good job with build quality. The metal chassis exhibits no obvious flex even when pushing down hard near the trackpad area. The lid opens and closes smoothly with one hand, and Asus continues to use the in-house Ergolift hinge that raises the keyboard deck a few millimetres as the screen is pushed back into a regular position. It's done to aid cooling by creating a small gap for hot air to be expelled out of the bottom, Asus says, though the minor downside is the screen doesn't go all the way back; it's limited to around 150°.

Speaking of the screen, it's rather nice. Asus uses Samsung's 16:9 panel identified as ATNA33XC11-0. Offering up to 400 nits of brightness and 100 per cent of the DCI-P3 gamut, out-the-box colours are deep, vivid and, of course, blacks are inky. It's a shame there's no touch or 16:10 option, and we're not fans of just how glossy and reflective the Asus implementation is. So glossy, in fact, that reflections are seriously off-putting if you're coming from a matte display. 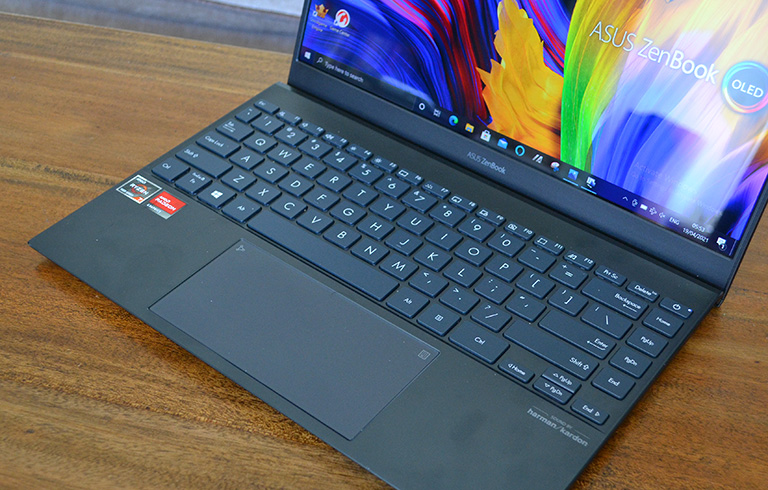 The combination of a metal finish and dark-grey exterior - there's also a 'Lilac Mist' option - leads to visible fingerprint smudges around the trackpad section after little use. It's not the worst in the regard, but on the lower end of the scale. We like the large, dual-function trackpad yet have less love for the keyboard. Let's explain why. Asus uses what appears to be a shrunken-down board from the larger UM425 of last year. That's okay in general - it is familiar across many ZenBooks - yet it feels too small on a 13.3in model.

My small hands find it difficult to type at full speed due to the cramped nature. Moving between laptops, this lack of relative space is most telling as I reach for the upper-row keys, so I can only imagine what it feels like for someone with a large hands and thick fingers. I also don't like the travel and general typing experience as much as, say, on a Microsoft Surface laptop, and that's down to the sponginess. Could Asus have used a different, more-optimised keyboard here? Possibly.

Each key is backlit in white LEDs but the implementation is not perfectly even. Sitting in a regular typing position I can see the bright white light seep through the left-hand side of the board more so than the right.

There's no biometric sensor on the UM325S. The camera, however, does support Windows Hello through IR technology. That's all it's good for, really, as the quality from the 720p snapper is grainy and poor. 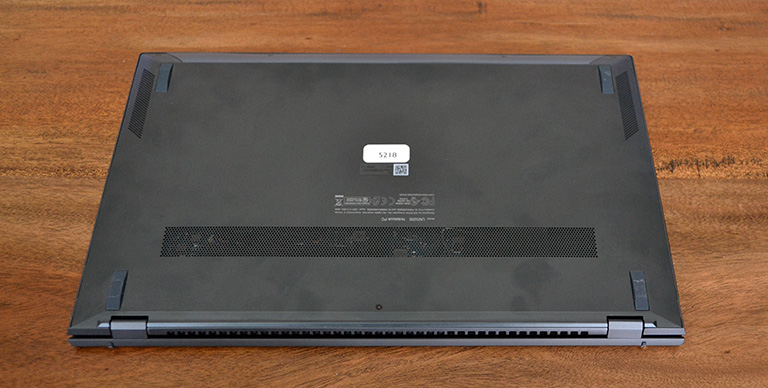 Being so svelte entails compromises in connectivity. UM325S carries a single Type-A USB 3.2 Gen 1 (5Gbps), a couple of Type-C USB 3.2 Gen 2 (10Gbps) for connectivity or power via the bundled 65W adapter. Note that unlike the Intel models, there's no Thunderbolt support. There's also HDMI 2.0b and a micro-SD card reader. Notice anything missing? There's neither a traditional 3.5mm headphone jack nor a LAN port. Asus makes up the shortfall by bundling USB Type-C and Type-A adapters for both functions, respectively. Sound quality is more than reasonable from the harman/kardon speakers within the small unit; just don't expect lots of bass and you won't be disappointed.

Alongside the aforementioned Ryzen 7 5800U, this model houses 16GB (2x8GB) of soldered LPDDR4-3733 memory, a 1TB 2242 NVMe drive from SK hynix, and provides juice with a 67Whr battery. Inside, a heatpipe connects up two heatsinks, with the majority of the fan cooling taking place beneath the top-right of the keyboard deck. Credit to Asus' engineering team as the chassis never becomes overly warm to the touch.

As shipped, the MyAsus program offers control over various power profiles. We ran with the default 'Standard' profile whereby the fan(s) remain largely off when browsing or watching a YouTube video but do become noticeable, though not excessively so, when running multi-core CPU tests or gaming.

Price remains a thorny issue, particularly for Asus review samples that are usually not easy to buy in the UK. We're informed this particular specification will retail for around £1,200, yet finding one in stock, at any price, will prove tricky.