AMD really wants you to buy a Ryzen-powered laptop this year. We know this because the key thrust of CEO Lisa Su's keynote was on the latest generation of 5000 Series Mobile chips which integrate up to eight Zen 3 CPU cores and established Vega graphics into what is effectively an accelerated processing unit (APU).

Building on the momentum of last year's Ryzen 4000 Series Mobile by encouraging all the big laptop makers to choose any number of 14 new chips, key to AMD's success is in getting the big boys to quickly release premium laptops imbued with its smarts. Though AMD expects around 150 design wins this year, one of the most intriguing is already in for review today. Say hello to the Asus ROG Flow X13. 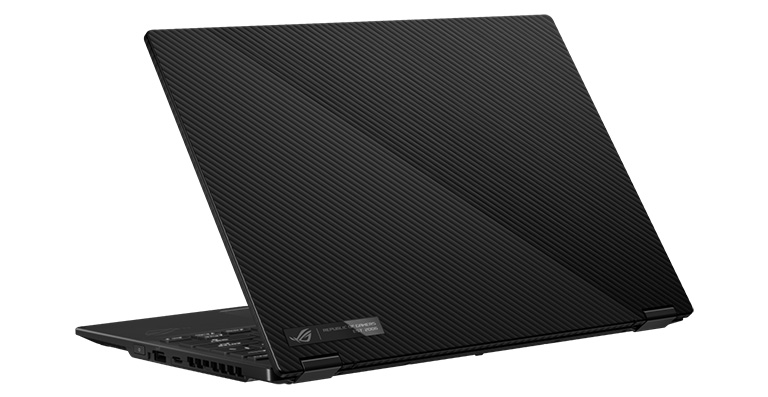 Don't let the staid looks fool you. This chameleon-like laptop fits right into a true thin-and-light form factor, houses AMD's best-ever mobile CPU, crams in a discrete video card from Nvidia, and provisions for a fully-adjustable high-resolution touchscreen display enabling tablet mode. For giggles, the higher specification Flow X13 connects to a bundled external GPU accommodating none other than a mobile GeForce RTX 3080 GPU. A laptop for all seasons.

Dimensions of just 299mm x 222mm x 15.8mm work well with the 13.4in screen and 1,350g weight. The stealth aesthetic is interrupted on the top by two visible hinges necessary for the lid to rotate fully around the chassis. Like many Asus laptops, Flow X13 adopts 'ErgoLift' technology whereby the typing deck angles up a few degrees, in the name of comfort, as the screen is pushed into regular notebook orientation.

The smooth patterning on the top isn't overly grippy, mind, so be careful if carrying in one hand. On the plus side, it's pretty good at hiding smudges and fingerprints. There's no lighting or funky RGB effects anywhere, thankfully, so we'd feel confident with the Flow X13 in a business environment as much as a premium solution in Studentville. 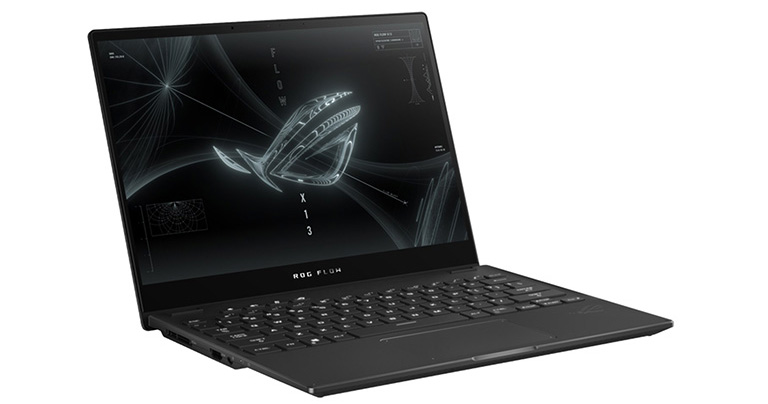 Flick it open and you're treated to something we love to see: a 16:10 display. Aiming as much for productivity types as gamers, Asus offers the 13.4in screen in either 3,840x2,400 60Hz or 1,920x1,200 120Hz IPS touch panels outfitted with adaptive-sync tech and protected by Gorilla Glass for basic scratch and scuff resistance. Adding to the lustre, both panels are calibrated at the factory for enhanced accuracy and offer decent degrees of colour coverage, all the way up to 85 per cent of DCI-P3, says Asus.

Specs tell you one story, colorimeters another - which we'll get to later - though a side-by-side comparison against my daily driver, a 3:2 Microsoft Surface Laptop 2, shows the 4K+ Asus to be not quite as bright or punchy at the higher end of the scale. That's not to say the Asus display is bad, because it certainly isn't, as colours are well-saturated and even across the panel. The touchscreen, meanwhile, is every bit as nippy. However, one problem we have with the UHD+ display is its sheer resolution compared to screen size. We had to use 300 per cent scaling which negates the benefits of having so many pixels to hand.

Key to the X13's do-it-all aspirations is the 360-degree hinge. It works well enough, staying firmly in position, yet the overall screen-to-body weight means there's more unwanted touchscreen vibrations than on, say, a Microsoft Surface laptop. Fan noise and even performance is directly linked to the screen's position because moving it to varying angles enables the vents on the top of the typing deck to expel more air.

Heat is pushed out in three areas: at the top of the deck, all along the right-hand edge, and at the bottom. It's quite interesting to observe the different fan pitches depending upon orientation, and whilst the chassis never gets too warm, there is a localised hotspot around the top-right of the deck during heavy use.

Being a rather slim 15.8mm, Flow X13 is parsimonious on the ports front. There's USB-A and USB-C on the right edge, with the latter providing up to 65W charging from the bundled 100W adapter. A power button/fingerprint reader resides this side, too. On the left, at first glance, there's merely a single HDMI 2.0b, combo audio jack, and activity LEDs. Looking closer reveals a rubberised ROG cover under which resides a proprietary connector for the external GPU enclosure and a second charging/data USB-C port. Do understand that if going down the eGPU route, the thick connector covers the second USB-C, which isn't great. Asus initially sells this specification with the eGPU, which we're testing in a separate review, though we understand there are plans for a standalone version.

Asus does a good job with the keyboard. It's comfortable, more so when automatically raised a few degrees by the screen being pushed back, has 1.7mm of travel, and provides audible feedback with a muted click when bottoming out. White backlighting, which can be turned off, is subdued and can be set to one of three effects. More good is found on the large trackpad that, like the keyboard, is smooth and consistent. Audio is surprisingly solid from such a petite unit whilst the 720p webcam is serviceable rather than great. Why is it, in a world of increased home working, that laptops haven't upped the resolution to at least 1080p?

Asus' choice of slimline chassis appears to be at odds with the considerable firepower contained within. Flow X13 is home to the best-ever Ryzen Mobile processors. Our sample toots along with an 8C16T Ryzen 9 5980HS. Ordinarily such a chip would be homed inside a full-on gaming laptop, but Asus manages to squeeze in the 35-54W chip into this true thin-and-light. Even bolder, Flow X13 then throws in a dedicated GeForce GTX 1650 Max-Q 4GB, spices things up with 32GB of soldered LPDDR4X RAM, and adds in a 1TB WD SN530 NVMe PCIe 3.0 x4 SSD. Firepower indeed. One really can't do much better on a spec sheet than this. 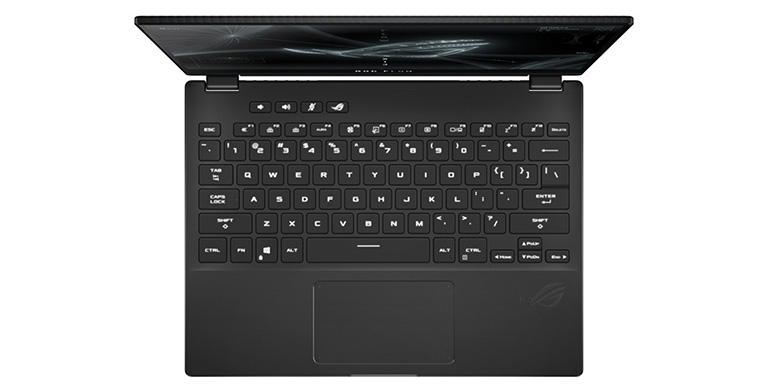 Intel's 6 AX200 takes on WiFi duties, a 62Wh battery is on the large side for a 1.35kg laptop, and the only real blot is Asus including an annoying trial of McAfee Security.

A few thoughts. Should Asus have waited for the Ampere RTX 30-series GPUs before retailing this model, as GTX 1650 Max-Q feels underwhelming given the rest of the spec. Is shoehorning this level of performance too much for the slim chassis to handle, and then there's the question of available models. Our sample, detailed above, can only be purchased with the eGPU dock as part of the bundle. Doing so naturally escalates price, to a whopping £2,900 (you read that right), though a lesser spec, with Ryzen 9 5900HS, 16GB RAM, FHD+ 120Hz display, 512GB SSD, and still GTX 1650 Max-Q is available for a much more amenable £1,500. Both configurations are backed by a scant one-year warranty, which feels tight.

Point is, this is not a value solution, and the lopsided nature of cutting-edge APU alongside arguably mediocre discrete graphics puts it in a tight spot. Is it a gaming laptop? Is it more of a productivity powerhouse, or is part both? Let's answer this as we benchmark this apparent wolf in sheep's clothing.