AMD's Ryzen resurgence has most keenly been felt in the desktop space. Offering a heady combination of more cores and threads than rival Intel at similar price points, Ryzen has been the go-to choice for many an enthusiast over the last three years.

It stands to reason that AMD wants the same impact in the laptop market, where Intel is arguably stronger, and its latest 'Renoir' chips mate Zen 2 CPU cores with Vega graphics. The upshot is excellent performance and great battery life in packages between 15W and 45W. The Asus ROG Zephyrus G14 put out suitably impressive numbers via the 45W Ryzen 9 4900HS chip, so now it's time to turn around attention to a sleeker proposition making full use of the frugal U-series chips. Enter the Lenovo Yoga Slim 7. 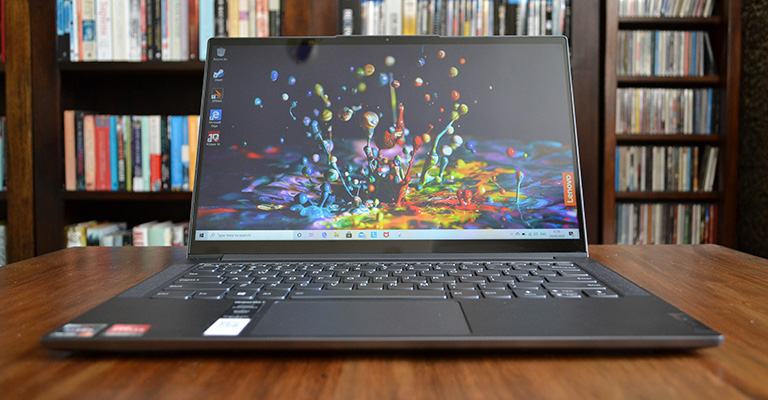 Conveniently available with either Intel or AMD chips, the Lenovo Yoga Slim 7 is presented as a 14in laptop primed for solid everyday performance backed by exceptional battery life.

As is Lenovo's wont, there are multiple versions with the same base name. Not all are available in every territory, and to confuse matters further, review samples tend to be one-offs with a smorgasbord of components not found at retail. The AMD version is known as Yoga Slim 7 14ARE05 and is available with the 6C12T Ryzen 5 4500U, Ryzen 5 4600U, or 8C8T Ryzen 7 4700U and the 8C16T Ryzen 7 4800U. More on components later.

Slim 7, also known as IdeaPad in some regions, naturally borrows heavily from Lenovo's mid-range industrial design present on IdeaPads and other Yogas. That's no bad thing as it translates to a high-quality aluminium chassis whose matte finish does a good job at hiding fingerprints. The screen has a raised edge just above the webcam that just about enables it to be lifted with one hand. The action is stiff enough that we'd recommend using both hands as, even with a couple of gripping feet, the laptop is prone to moving around if you don't have a firm grip from both sides. Being a Yoga, the screen folds back to almost flat, made possible by a quality hinge that works in conjunction with a raised bar on the bottom. Conveniently, pushing the screen back into a usable position exposes air vents running the length of the hinge. And closing it fully leads to a satisfying thwonk.

It's worth knowing that any slight vibration causes the screen to wobble more than most. Tapping the side with your finger makes it vibrate for a good five seconds; it may not be the best if using on a train or plane. Coming in at 320.6mm x 208.2mm x 14.9mm and our sample weighing 1,412g - with a travel weight of 1,722g including 65W USB-C charger - portability is decent if not amazing. 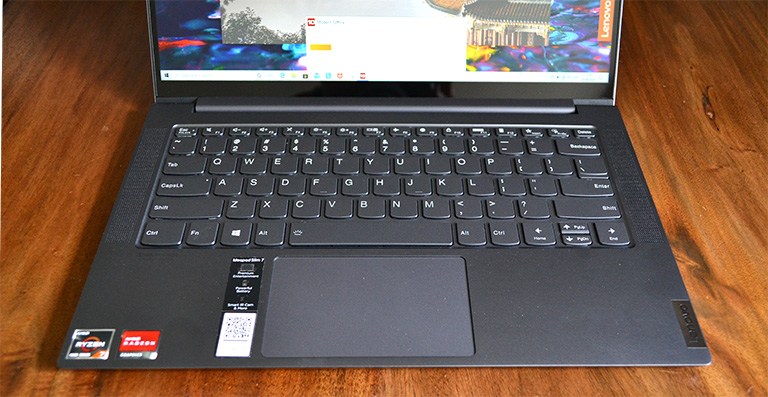 It's a shame the AMD version of the Yoga Slim 7 has neither a touchscreen nor high-resolution panel option. As far as we can discern, panel choice is solely a 14in FHD IPS 60Hz from AUO (B14HAN06.8) offering FreeSync support and solid 400-nit brightness. That's enough for Lenovo to provide Dolby Vision certification. At full whack, the screen is bright, even, and comfortably readable outdoors. There's an optional glossy coating on our model that gives colours punch but, as expected, isn't great for reflections. Going down the low-power FHD route paves the way for excellent battery life - specs indicate over 17 hours is achievable during light use.

There's very little flex in the areas surround the smooth, responsive trackpad. Pushing into the keyboard section reveals more, naturally, though we consider the typing experience to be better than most. Keys have just the right amount of travel, spacing is good, and you can see the ThinkPad heritage shine through to mainstream solutions such as this Yoga Slim 7. That said, we always like to see a double-height Enter key; it's apparently available in other regions. And having larger up/down keys would certainly be of benefit. 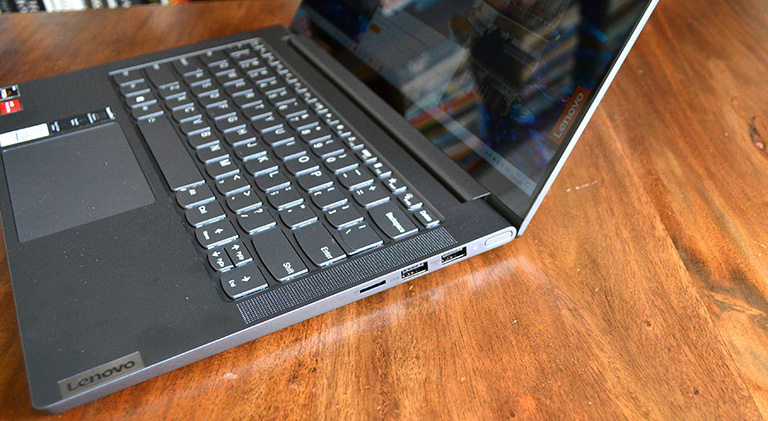 A two-step per-key white backlight is available by pressing the Fn and Space keys. We'd prefer the ability to toggle the brightness in smaller steps because it's too bright to begin with. The front-firing speakers, meanwhile, are also Dolby Vision certified and subjectively very good, offering clarity and heft associated with larger laptops. Loud enough for everyday use in a regular room, they don't distort at maximum volume. Oh, and if you choose, the stickers come away quite easily for that stealthy look. 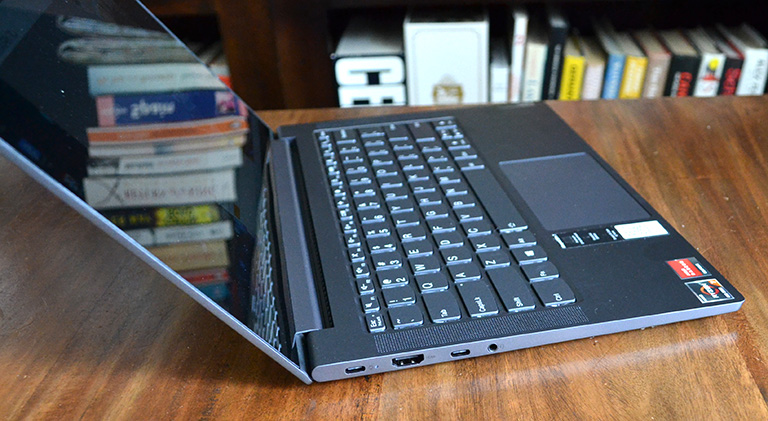 Charging via USB Type-C is handy, and the accompanying 65W adapter is able to get the laptop from fully depleted to 39 percent in 30 minutes, while a full charge takes 1hr 45m. A small status LED shines orange when the battery is below around 80 percent, turning white thereafter. A full-sized HDMI sits next to another USB Type-C (10Gbps) that also supports power delivery. Only the Intel version of the Yoga Slim 7 offers Thunderbolt support. Last but not least, a 3.5mm audio jack is duly present.

The laptop is totally silent when idling or if browsing websites. The fans spin up modestly under basic load and only verge on noisy when under full CPU or GPU stress for, say, three or more minutes. Yoga Slim 7 therefore remains composed and quiet at most times.

Star of the show is the AMD Ryzen 7 4800U processor here primed with a 25W TDP. The extra 10W over the base specification is useful in providing higher frequencies for longer periods, and it's a testament to Lenovo's engineering that it can cool such a chip, in a 15mm-thick chassis, without making a racket. Offering eight cores and 16 threads in an Ultrabook form factor is impressive, with speeds ranging between 1.8GHz and 4.2GHz. The accompanying Radeon Vega 8 Graphics hum along at 1.75GHz. It's also good to know that battery performance is nigh-on identical to being plugged in.

The processor is supported by 16GB (2x8GB) of soldered LPDDR4 memory running at a lofty 4,266MHz albeit with loose latencies. And there's a 512GB WD SN730 M.2 SSD alongside a spare 2242 slot for another drive, if you feel confident enough upgrading it yourself. WiFi is bang up to date, too, with Intel's AX200 offering Bluetooth 5 and WiFi 6. There's no option for a discrete video card due to the chassis sleek profile.

A couple more notes. The basic 720p IR webcam doesn't have a privacy shutter as on other models in the range. Lenovo's done well to shoehorn a 60.7Wh battery into the chassis, which bodes well for day-long mains-free use. The build of Windows 10 Home is mostly free of bloatware while the company's Vantage application is useful as a one-stop-shop for downloading drivers and running diagnostics. With so much good, it's frustrating that Yoga Slim 7 is backed by a paltry one-year warranty as standard.

As this specification is unique, our best guess, going by available units, is a retail price of around £900. Let's now see if this Ultrabook can best the rest as we put it through the benchmark wringer against nine similar machines.