AMD's return to form in the graphics space is good news for fans of Sapphire Technology. The Hong Kong-based manufacturer is renowned for producing high-quality graphics cards, and having looked idly on as Nvidia dominated recent generations, is now eager to step up to the plate with a range of latest-gen hardware based on AMD's competitive RDNA 2 architecture.

Even at this early stage, Sapphire already has nine different Radeon RX 6000 Series cards in its stable, with the premier solutions falling under the Nitro+ umbrella. We've already seen the RX 6800 XT get the triple-fan treatment, and today we're following up with a closer look at the RX 6800 Nitro+.

Priced, in theory, at £639, Sapphire's best custom-cooled variant fetches a lofty premium over the £530 reference board, and finds itself encroaching high-end territory occupied by RX 6800 XT and Nvidia's GeForce RTX 3080. We say in theory as none of the aforementioned are in stock anywhere, and as global shortages show no signs of abating, it's hard to draw any real conclusion on price; manufacturers and retailers are well aware of the fact that every card will sell in the current climate.

Still, if you are one of the lucky few who manage to bag a RX 6800 Nitro+, you're unlikely to be left disappointed. Sapphire's ability to create some of the most robust graphics cards hasn't waned during AMD's years in the wilderness, and we're confident in stating that few AIBs, for either AMD or Nvidia, maintain a quality level as high as this. We even like the way card looks, with silver trim accentuating the black shroud, elegant RGB lighting, and a silver metal backplate providing good rigidity throughout.

Dimensions of 311mm x 134mm x 55mm ensure the card spills liberally into the third slot, and a weight of 1.2kg intimates a fair ol' chunk of cooling. Amid the assembly is a full-length aluminium heatsink, a dedicated dual-heatpipe cooling module attached to memory, MOSFET and chokes, as well as thermal pads connecting the PCB to the backplate. On top of all that are three fans, with a slightly smaller central fan spinning in the opposite direction to the outer duo supposedly for optimal airflow.

Such robust cooling is the star attraction, yet there are other useful incentives, too. Sapphire includes a dual BIOS as standard, with preset Performance (default) and Silent modes, and the hardware switch has a third setting that allows BIOS selection from within the Trixx software utility, giving users the ability to change BIOS without having to venture inside the PC. Last but not least, there's also a three-pin aRGB header at the end of the PCB paving the way for synchronised lighting with compatible hardware.

Power is sourced via a standard 8+8 configuration, with both recessed connectors easily accessible courtesy of a notch in the backplate, and as expected Sapphire provides a factory overclock as standard. Out-the-box core frequency climbs from 2,105MHz to 2,190MHz, representing a mild four per cent increase, while the large 16GB GDDR6 frame buffer sticks to a reference speed of 16Gbps.

We'd expect the Nitro+ card to be a smidgen quicker than AMD's reference board, but our upcoming benchmarks suggest otherwise. For whatever reason, the AMD card is a little happier inside our Ryzen test platform, routinely boosting to between 2,200MHz and 2,250MHz. Sapphire's Nitro+, meanwhile, tends to however at around the 2,160MHz mark. There's not a lot in it, but don't automatically assume dearer partner cards will deliver a meaningful uptick in framerate. 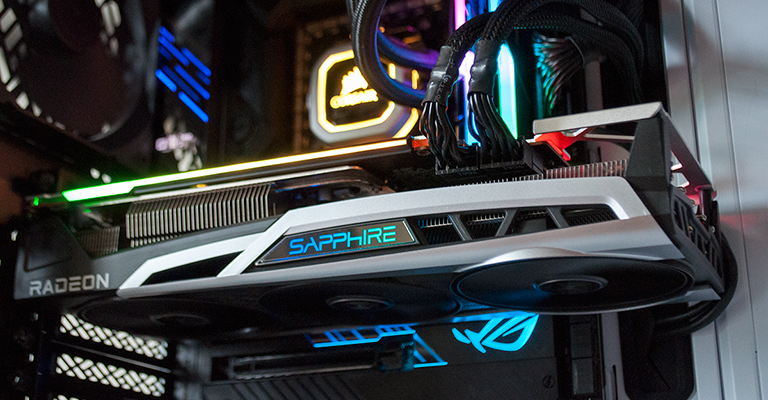 Looks rather handsome inside our test PC with Sapphire doing a decent job of illumination. aRGB is spread across three sections - the Sapphire logo and lightstrip across the top, plus a logo on the backplate - and there are enough LEDs to ensure an even spread of light. Around back, display outputs are kept to the familiar quartet of HDMI 2.1 and three DisplayPort 1.4.

It's a shame stock continues to prove hard to come by - Radeons appear to be even rarer than GeForce at the time of writing - and the immediate outlook from popular UK retailers isn't promising. We could be waiting a while for the dust to settle, so in the meantime, let's go ahead soak up the benchmarks.