As RDNA 2 is also the architecture powering the Sony PlayStation 5 and Xbox Series S/X consoles, having support for DX12 Ultimate's feature-set is paramount for the PC. These reside in four camps: mesh shading, sampler feedback, ray tracing and variable-rate shading.

In mesh shading, the GPU can control the level of geometry detail rather than rely on the host CPU to issue all the necessary draw calls, which may present a bottleneck during increasing scene complexity. Going hand in hand, sampler feedback optimises memory and texture streaming, while variable-rate shading, as the name suggests, lowers the shading rate in parts of the scene that don't require it. Performance is improved at no immediately perceivable cost to visual fidelity. Mandated by DX12 Ultimate, it's worth knowing that rival Nvidia's GeForce RTX cards already support these features. 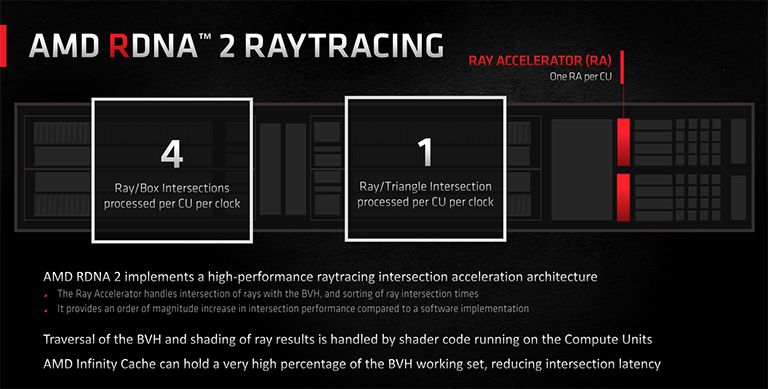 The one talked about most is ray tracing, which enables games to simulate shadows, global illumination and reflections far more accurately than traditional rasterisation methods. Hardware-based ray tracing is a cornerstone of Nvidia's RTX push and, given its position in DX12 Ultimate, is also present in RDNA 2.

The computational complexity of modelling the paths of light-rays in a particular scene is huge, so ray tracing only works sufficiently well via hardware assistance. Nvidia has dedicated RT Cores, AMD instead includes a ray accelerator in every CU. It works on the same principle of calculating if a light-ray intersects with a triangle. If it does, the result is returned to the shaders, and it's this searching and sorting which is considered the heavy load of PC ray tracing. Not every triangle is tested, of course, and the first calculation is to split the scene into multiple bounding volumes. A simple test reveals if a bounding volume contains an intersecting triangle/primitive. We mention this because AMD holds this bounding volume in Infinity Cache, close to the ray accelerator, speeding up probable ray tracing performance by reducing latency.

Nvidia's RT Cores work in roughly the same way on Turing and Ampere, sans Infinity Cache, but the key difference is in performance. AMD says it can process one ray/triangle intersection per CU, per clock. Nvidia's dedicated cores, meanwhile, purportedly offers higher performance, and the only meaningful method of discerning the actual difference is to benchmark it on DXR-compatible titles.

For Nvidia, ray tracing works best when allied with deep learning super-sampling (DLSS) technology designed to boost performance by using the dedicated Tensor Cores and AI to intelligently upscale lower resolutions whilst maintaining visual quality. The latest iteration, DLSS 2.0, does a good solid at making a FHD input appear like a native UHD image. It's important to stress that AMD doesn't have a comparable technology at launch, and its omission may stifle heavy ray tracing adoption on Radeon cards, due to a lack of performance. On a more positive front, AMD promises to support Microsoft's DirectStorage API as soon as it is available.

Looking back at architecture as a recap, RDNA 2 improves upon its predecessor through more CU units, higher frequencies, smarter caching, DX12 Ultimate support, all without markedly increasing power on products that harness the existing 7nm process.

Before Radeon RX 6000 Series, legacy operation means that host CPUs can only access a small portion of GPU VRAM, typically limited to 256MB. AMD's Smart Access Memory (SAM) enables the CPU to access the entire gamut of video card memory over the PCI Express highway, which removes certain bandwidth bottlenecks that inhibit overall performance. The idea is that being able to map more memory promotes higher data transfer and consequently increases framerate. The exact gain is dependent entirely on game engine and resolution, but can be up to 15 per cent in a best-case scenario.

AMD limits this initial SAM usage to RX 6000 Series cards and Ryzen 5000 Series CPUs running on 500 Series chipsets, and we'll demonstrate the potential later on in the review. At the time of writing, Nvidia is working on a SAM-like technology of its own, though it is not expected until January next year.

RDNA 2 is the blueprint, but physical implementation is as key in defining pricing and performance. Pertinent to today's launch, Radeon RX 6800 and Radeon RX 6800 XT lead the premium charge.

Both are built from the large die that, as we have defined, tops out with 80 CUs comprised of 5,120 shaders represented by the upcoming Radeon RX 6900 XT. The x800 parts use 72 and 60, respectively. Both also utilise 128MB of Infinity Cache, and that's one reason the die is over 2x the size and 2.5x the transistor budget of RX 5700 XT. Big Navi in name, Big Navi in stature.

AMD says it has made strides in frequency uplift over RDNA. Having a Boost Clock of up to 2,250MHz corroborates those assertions, and the quoted speed is higher than what Nvidia offers with Ampere running at full chat.

As Infinity Cache is so important to the overall performance and PPW, AMD uses GDDR6 memory operating at 16Gbps across a 256-bit bus on both cards. This means that RX 6800 and XT will benchmark quite close together, within 10 per cent, one can assume, and that's why we see pricing at similar levels. Given the reliance and focus on Infinity Cache as a means of limiting the usefulness of card memory, AMD is very generous with the amount of onboard VRAM - 16GB feels like overkill on products such as these.

Remember the focus on not driving up power? The whole reason why Infinity Cache exists. AMD is able to keep the RX 6800 at 250W, which is about 10 per cent higher than RDNA-based RX 5700 XT. The numbers suggest it will be at least 50 per cent faster at QHD and UHD, so there's intrinsic merit in AMD's PPW thinking. Radeon RX 6800 XT, meanwhile, raises the board power to 300W and adds in that imputed 10-15 per cent extra framerate over 6800 regular.

These cards are decent in isolation, but they do not exist in a vacuum. Radeon RX 6800 XT goes up against the impressive Nvidia GeForce RTX 3080. Understanding it may not have the ray tracing chops of its direct competitor, pricing is $50 lower. RX 6800 is, at a minimum, $80 dearer than the RTX 3070 so needs to be faster by at least 10 per cent for it to offer the same bang4buck. Does an 8GB-equipped RX 6800 make more sense knowing Nvidia's current stack?

There's a lot to take in here. Two questions remain. How well does RDNA compete against Ampere in rasterisation and ray tracing gaming, and what are the stock levels like in the year of constraint? We can begin to answer the first question in the benchmarking section.