Nvidia's Turing architecture was supposed to usher in a new era of visual computing. Equipped with never-before-seen technologies such as ray tracing and DLSS, the promise has not been translated into immediate success for the GeForce RTX 2080 Ti, RTX 2080, and RTX 2070.

Part of the reason is the lack of gaming content that can truly leverage Turing's forward-looking technologies, though that is changing slowly but surely. The second issue is price vs. performance, with the cheapest RTX 2070 fetching £450 but barely any faster than the GTX 1080 from the Pascal generation.

What Nvidia really needs is two things: more software to take advantage of the GPUs' capabilities and, of course, for the RTX line to be made cheaper. Speaking to the second, more important point, today sees the introduction of the GeForce RTX 2060.

Nvidia's historical x60 cards have done very well. Typically offering an excellent mix of gaming performance and keen pricing, it is no surprise to see the last-generation GTX 1060 hold clear domination in the most recent Steam hardware survey.

The standard approach to producing said x60 cards is to design a dedicated, optimised die that hits multiple sweetspots. That is not the case here, though.

What's clear from looking at the comprehensive table is that the all-new RTX 2060 isn't that new. High-level specs reveal that it is based on a modified TU106 (RTX 2070) die rather than a much smaller, leaner die. The on-paper differences between RTX 2060 and GTX 1060 verge on the staggering - it has almost 250 per cent more transistors, occupies a die size that is over twice as large, even though it is hewn from the latest 12nm process, and finds space to fit in those RTX-specific RT and Tensor cores.

Appreciating the potential horsepower and consequent positioning headaches of going down this approach, Nvidia makes significant cuts to each portion of the RTX 2060 GPU, which retains only 30 of the RTX 2070's 36 SMs. Understanding how each SM controls the key ratio of shaders, texture units, RT cores and Tensor cores, we know that RTX 2070 has 20 per cent more on each count.

Yet even that kind of snip isn't enough to fully differentiate the x70 and x60 cards. Nvidia goes further by taking the proverbial hammer to the back-end, too, and strikes a few key performance blows by reducing the memory width from 256 bits to 192 bits, ROPS from 64 to 48, and framebuffer size from 8GB to 6GB. Thankfully for the RTX 2060, the fast GDDR6 memory, operating at 14Gbps, is left intact.

RTX 2060 is therefore a fully-gimped version of the RTX 2070: the fact they're based on the same die is almost irrelevant. Nvidia's approach can be best described as being inelegant, quick and dirty, enabling those GPUs that don't quite reach the full RTX 2070 grade to be repurposed here. From a pure architecture point of view, a specific 'TU108' die would have been preferable, perhaps with the ability to scale the power down even further than the quoted 160W. 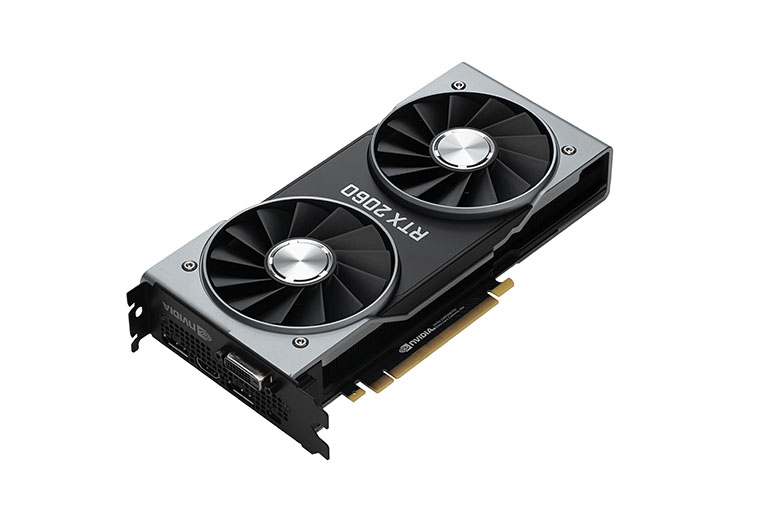 Yup, the Founders Edition card appears identical to the RTX 2070.

The upshot of this GPU-wide disablement is performance that ought to be around 75 per cent of the RTX 2070, so thoroughly decent at FHD, decent at QHD, but generally not up to scratch at UHD. As with most products, the way in which it provides performance is largely academic if price is good enough.

GeForce RTX 2060 comes to market in the usual Founders Edition and partner models. What's interesting this time around is that Nvidia removes the factory overclock and price premium present on other RTX FE cards and goes for stock on both fronts.

Thus the attractive FE card, which appears the same as the RTX 2070, further cementing their similarity, is set to cost $349 (£329) and be released with a core boost speed of 1,680MHz and that fast GDDR6 humming along at 14Gbps.

Back-of-the-envelope calculations suggest GTX 1070-like performance for significantly less money, wrapped up in a package that also has reasonable ray tracing and DLSS capability to boot.

Let's now see if all this conjecture bears fruit during the benchmarking run.