You may wonder what today's fuss is about as 11th Gen Core has been announced since September 2020 and is already shipping in laptops. That's true, but Intel separates desktop and mobile architectures, prioritising the latter this time around. On mobile, 11th Gen Core refers to chips powered by the Tiger Lake architecture built on 10nm, whereas the desktop implementation is known as Rocket Lake (RKL-S) and manufactured on 14nm.

Intel released high-level details back in January. Now we get to peer further under the hood and see just how Rocket Lake is constructed and, more importantly for the enthusiast with money to spend this summer, how it stacks up against the legion Ryzen competition.

Focussing on the CPU cores first, RKL-S is bit of a Frankenstein because it mates the modern Sunny Cove architecture to the ancient 14nm manufacturing process. Sunny Cove is the successor to Skylake and offers around 20 per cent IPC improvement via adding more innate processing capability. In particular, core-for-core, Sunny Cove doubles the L2 cache size and increases L1 data (though not instruction) and micro-op caches by 50 per cent, enabling the chip to hold a larger set of instructions per cycle. Intel refers to this as the machine becoming 'Deeper', even though L3 cache remains the same across generations at 2MB per core. 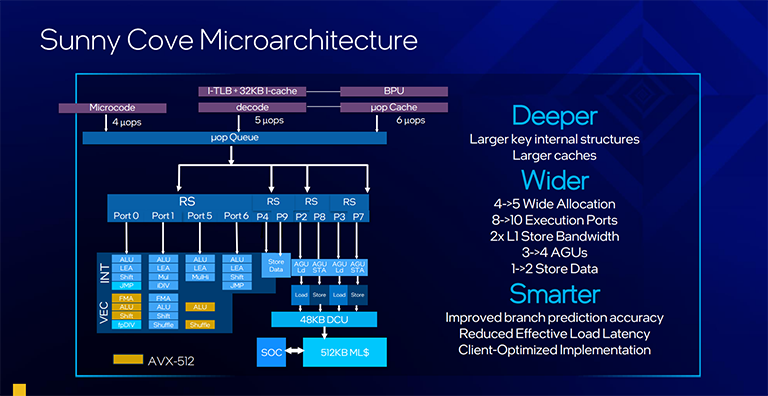 Sunny Cove is also, in Intel-speak, 'Wider' as it improves back-end allocation width and execution ports by 25 per cent, whilst the execution engine itself sees double the data stores and an additional address generation unit. If you are going to widen the beast up top, it needs sufficient width to execute the instructions in the middle. In parallel to this, the 'Smarter' part of the architecture rests with improving the branch prediction and prefetching capability, necessary to feed the mouth of the beast, in our tenuous monster analogy.

It's clear to see that Sunny Cove is a more muscular design whose main remit is to improve IPC rather than focus on frequency. This exposition treads older, familiar ground as the Sunny Cove CPU cores are already present on Intel 10th Gen Mobile processors imbued with Ice Lake technology, which are a generation behind Tiger Lake that uses the even better Willow Cove cores - yup, lots of lakes and coves that combine to confuse.

Anyhow, and here is the important bit for desktop enthusiasts, Intel took the decision to use arguably last-generation Sunny Cove CPU cores and then backport their natural 10nm production process to 14nm that's been around in one form or another since 2014. Older cores on really old fabrication technology. One can argue the latest 14nm process techniques are materially different enough to be considered an interim step, yet Intel remains firmly behind AMD's TSMC-derived technology that has been riding on space- and energy-saving 7nm for a while.

If Intel really wanted the desktop 11th Gen processors to shine, it would have used 10nm SuperFin-based Tiger Lake in expanded-core form. Why, then, has Intel decided to go down this old-meets-older path? Good question, and the answer is yields on the 10nm process.

It is more important for Intel to maximise its limited-volume, cutting-edge process for laptops where total budget is far more of a concern than on desktops. Some of that new process is also reserved for upcoming servers where core density is key. By backporting Sunny Cove to established, mature 14nm, even though it feels wrong to the enthusiast, Intel can guarantee a set amount of production to meet heightened demand. This process backport changes the CPU core name from Sunny Cove to Cypress Cove. 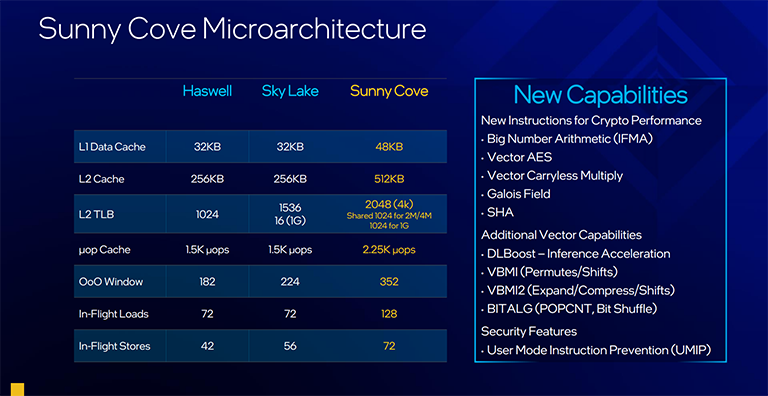 The obvious downside to this 14nm approach is necessary limitations in the number of CPU cores, especially as Sunny/Cypress Cove is fundamentally larger than its predecessor and Intel persists in plumbing integrated graphics into most desktop chips. Those graphics take the form of all-new Xe-LP featuring up to 32 execution units for, Intel says, up to 50 per cent more performance over the super-old UHD 630 generation.

This deliberate, forced-upon backporting limits RKL-S to eight cores and 16 threads, down from 10C20T on the current Comet Lake-S chips. Intel says the gains in IPC will mostly make up for the performance shortfall in heavily-threaded applications, whilst the same IPC ought to enable this generation to reclaim the single-thread application and gaming-framerate crown at lower resolutions.

Even so, Intel misses an obvious trick in the non-IGP F-suffixed models. Rather than simply disable the onboard graphics capability, the company ought to have released CPU-only models with 10C20T, which at least match the topology of the current generation.

Yet it's not all grim news. Outside of discussed architecture, the newer cores do bring extra features into play. For the first time on client desktop, there's a subset of AVX-512 - meaning instructions can run on ultra-wide 512-bit registers - which are most similar to the capabilities of mobile Ice Lake chips, including VNNI used by Deep Learning boost for faster machine learning inferencing.

One can readily question the need for AVX-512 on the desktop for a couple of cogent reasons. There's little need for client PCs to crunch, say, 32 16-bit operations in one fell swoop, or a heady mixture of single- and double-precision, and doing so incurs the wrath of the heat god as the processor is run at full tilt. Going to 512 registers naturally takes up further die space that could be better implemented for more cores or cache. Swings and roundabouts.

Talking of space and enlarged cores, our calculations suggest that the eight-core 11th Gen die measures around 270mm² and consists of 6bn transistors, compared with around 205mm² and 4.2bn for 10th Gen and 180mm² for core-and-thread-matching 9th Gen. Do remember that 10th Gen also has more cores, so it's reasonable to assume the RKL-S cores are a fair bit bigger. This further explains why Intel cannot readily run 10- or 12-core models using this CPU architecture; it was designed with 10nm in mind, not 14nm.