AMD is making inexorable progress in the server space through successive generations of EPYC processors. Second-generation models now proliferate the market at price points between $450 and $7,000. Built on the Rome architecture and touting double the number of cores and threads compared to the first generation, along with a healthy dollop of extra performance from the improved Zen 2 architecture, there's an EPYC solution for practically every Intel Xeon available.

And AMD is making hay while Intel stutters in execution. The latest slew of Rome chips and associated SP3 platform is strong on all fronts - compute, memory bandwidth, expansion capabilities, value - whilst Xeon is still on the old(er) Cascade Lake architecture. Even the interim architecture, codenamed Cooper Lake, is now only available to the biggest of customers.

The EPYC group knows that it needs to keep the silicon pedal to the metal. Examining the current second-generation EPYC portfolio in context with recent mid-stack Xeon releases reveals there's scope to add a handful of high-frequency parts for specific applications and environments where per-core licensing and relative lack of scaling are the key drivers to adoption and best-in-class performance 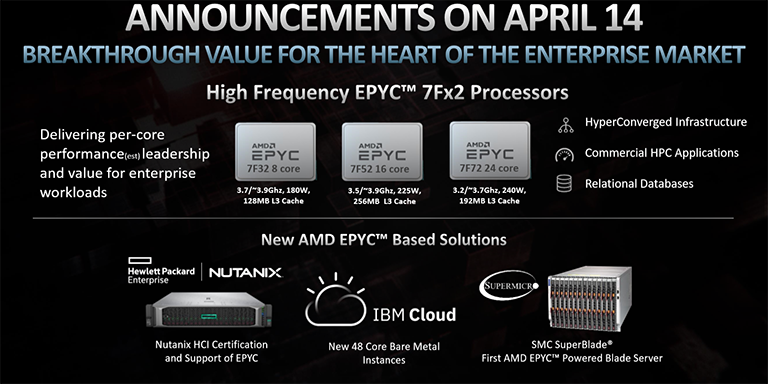 Augmenting the current second-generation stack, three new processors enter the EPYC fray today. Distinguished from other parts with an 'F' in the name, denoting frequency, there's the eight-core 7F32, 16-core 7F52, and 24-core 7F72, and the trio can be doubled-up as a 2P solution like most other EPYC chips. 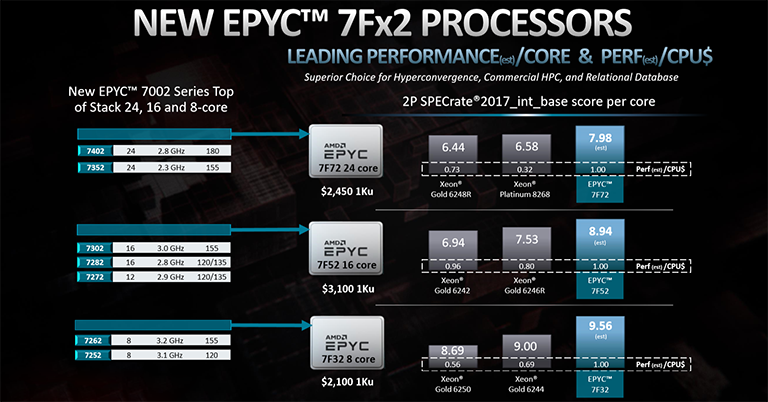 Illustrating that point, AMD provided an at-a-glance sheet detailing SPECrate 2017 int base scores - a general proxy for overall server CPU integer performance - for these chips against the same-core models from Intel's latest stable. Unsurprisingly, the new EPYCs come out on top in terms of pure performance and, tellingly, with respect to relative value, as shown by the numbers in the rectangular dotted section.

That's all good, yet there's still merit in looking at how these F-series parts coalesce into the wider second-generation EPYC landscape.

A few aspects become apparent as we delve a bit deeper into the specification. The F-series parts clearly have extra frequency over the best of the same-core range. The eight-core 7F32 is 15.6 and 14.7 percent faster on the base and boost frequencies, respectively, compared to the 7262 with which it shares the same number of cores. Similarly, the 16-core 7F52 and 24-core 7F72 crank up the MHz. This is to be expected.

AMD, however, knows that obtaining higher performance in the sectors it is targetting requires more finesse than raw frequency. This is why, other than 7F32, the cache arrangements are higher, accommodating larger datasets without the need to run back to main memory. The 7F52, in particular, is interesting as it has the full 256MB L3 complement as the range-topping 64-core models, intimating that AMD is using the full eight-die blueprint and activating only two cores per die. It's no coincidence that power budgets are increased over non-F parts, as well.

What's also abundantly clear is that AMD isn't comparing against itself in a financial sense. These F-series chips are a lot more expensive than the closest regular parts; we're looking at huge upticks in cost, oftentimes large enough to match a processor with double the cores. For example, the 16-core 7F52 is more expensive than the 32-core 7502, which is no frequency slouch itself.

The Need For High-Frequency CPUs

The justification is that these EPYCs are primed for industries which, as alluded to above, require absolute per-core performance; processor cost is less important in the overall productivity picture, and it's enough to beat rival Intel's best in each area.

And it's the very big players, with commensurately deep pockets, who are interested in high-frequency server chips. Think of electronic design automation (EDA) - used liberally by AMD in processor development - where software is oftentimes licensed per core. The sweetspot for companies invested in EDA is eight or 16 cores per socket, preferably at the highest speeds possible because performance is largely predicated by frequency. Here, for example, it's better to have two high-frequency 16-core parts instead of a single 32-core.

As noted by AMD, relational databases such as Oracle, SQL and DB2 are imbued with high per-core costs, so it may make sense for some OEMs to design high-frequency solutions, perhaps even with a single processor if there's enough supporting memory on tap. A move to a single processor removes any potential socket-to-socket latency spikes, too.

Last but not least, the high-performance computing (HPC) guys, depending upon workload, optimise for a certain number of cores per box. Having the highest-possible performance is clearly benefitted from running at elevated frequencies.

Point is that determining the right server processor is more than looking at the core-and-thread count. Each application places disparate demands on the hardware.