Ryzen 3rd Gen processors, based on Zen 2, are identified by by having the number '3' after the model range. Common amongst these new Ryzens is provision for higher frequencies compared to their progenitors, double the L3 cache we spoke about on the first page, 7nm production, and memory support now at 3,200MHz. And, of course, the IPC goodness that Zen 2 heralds. All offer support for PCIe Gen 4 and the extant AM4 platform, preferably on the also-all-new X570 chipset. Head over to here to learn more about that one.

In all, there are six new processors. From the bottom up, the Ryzen 5 class welcomes in the 3600 and 3600X. These carry the same six-core, 12-thread SMT processing as their 1st and 2nd Gen predecessors, while X and non-X ship with familiar 95W and 65W TDPs

Ryzen 7, too, keeps consistency between generations by having eight cores and 16 threads, and does the same minor frequency hike over Zen+ and Zen. TDPs are also in line with expectations. Some may have expected to see lower TDPs thanks to the 7nm process, but AMD has used any extra power headroom to drive the wider architecture and higher speeds.

Ryzen 9 is where it gets interesting for the true power user. This model nomenclature debuts with Zen 2 and brings more cores and threads to a mainstream platform than ever before. The Ryzen 9 3900X, for example, has up to 50 per cent more grunt than the already-decent Ryzen 7 3700X. One needs to invest in the more expensive X299 platform from Intel to match the immediate multi-threaded muscle - popular, mainstream Z390 tops out with the 8C/16T Core i9-9900K.

If that's not enough, AMD is set to release a 16C/32T Ryzen 9 3950X in September. The impressive part here is that it's able to thrash that many threads, at nominally decent speeds, whilst keeping to a restrained 105W TDP. Guess that's the indirect power of 7nm and speed-binning the very finest silicon.

In sum, Ryzen 3rd Gen promises improved IPC, higher frequencies for core and memory, twice the L3 cache, all on the AM4 platform enthusiasts are familiar with. 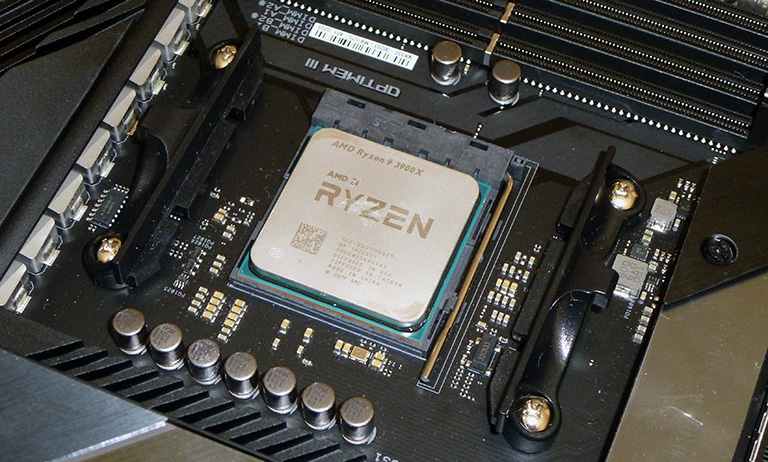 The chips feature solder between the metal packaging (heatspreader) and underlying CPU and I/O dies, which is both welcome and interesting for a multi-chip module processor. The new Ryzens represent a slot-in upgrade for many users who have already committed to AMD's AM4 platform, whether that be the all-new X570 or many older boards. 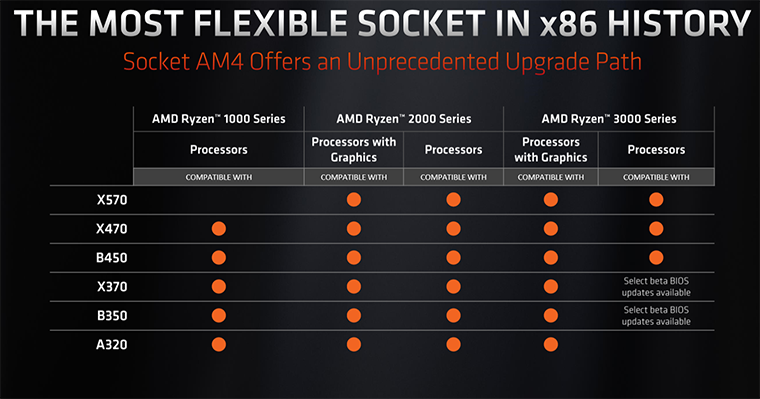 Speaking of AM4, AMD's made it clear there's not complete interoperability between every possible combination. Every 400-series board will support these new chips through a BIOS update, but the older X370 and B350's support is dependant upon the manufacturer.

Of course, AMD would prefer you to use the Ryzen 3000-series and X570 chipset combination for a new build because the duo enables PCIe 4 support from CPU through to motherboard, which is particularly handy if running the latest slew of high-performance SSDs.

If you need any added incentive, it's also worth noting the current AMD promotion offering a three-month subscription to Xbox Game Pass when purchasing select Ryzen CPUs or Radeon GPUs. Further details on qualifying products are available at amd.com. Right-o, on to the much-awaited benchmarks.