be quiet! is returning to the liquid-cooling scene with its first new all-in-ones since the 2017 Silent Loop. The new range, dubbed Pure Loop, is available as of today in 120mm (£83), 240mm (£93), 280mm (£103) and 360mm (£115) flavours and promises a couple of new features that help the coolers stand out from the crowd. Given our preference for 140mm fans, we have the Pure Loop 280mm installed inside our test platform and are ready to share some thoughts.

First impressions are favourable on most fronts. be quiet!'s £103 price tag is attractive alongside more colourful alternatives from the likes of Corsair, Deepcool and Fractal Design, and in a break from the norm, neither Asetek nor CoolIT is behind the hardware. In an effort to deliver something different, be quiet! has partnered with Taiwanese manufacturer KD Industrial, and we're pleased to find that build quality appears to be in keeping with the German firm's typically high standards.

We're also quite fond of the way the Pure Loop 280mm looks. Whereas most have shifted the emphasis to elaborate pumps and as much RGB lighting as possible, be quiet! shows sensible restraint with a compact CPU block whose silver, brush-effect lid is encircled with a sleek ring of white LEDs. It's a neat-looking piece of kit that is much tidier around the CPU socket than a hulking air cooler, and the simple white illumination contrasts well with the all-black tubing, radiator and fans.

Given the modest price and unassuming looks, it is a welcome surprise to find that be quiet! has managed to do a few things that most competitors conveniently ignore. Firstly, there's an easy-to-access refill port toward the left side of the 317mm x 140mm x 52mm aluminium radiator as pictured above, giving users the ability to top-up the coolant as they see fit. That's an option that we suspect most readers will appreciate, and be quiet! goes the extra yard by including a 100ml bottle of coolant in the bundle. Said bottle doesn't go into detail on the exact concentration of propylene glycol, but it's a nice touch and depending on usage should see you through multiple refills over the years. 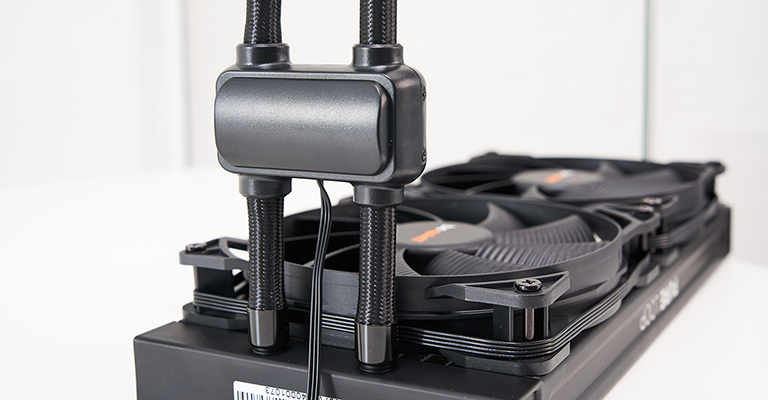 Secondly, if you're wondering how be quiet! has managed to make the CPU block so sleek, here's your answer; the pump has been moved further along the sleeved tubes to be housed in a plastic box nearer the radiator. Why move the pump from its usual location atop the CPU? Good question, and aside from the ultra-low-profile CPU block, be quiet! reckons the decoupled pump leads to "quiet operation and minimal vibration."

That's the theory, but our testing thus far has revealed little in the way of real-world benefit. Pump noise remains audible in a quiet room, and you can physically feel the vibration making its way through the sleeved tubes. Still, it's something different, and there's plenty to appreciate about be quiet!'s comprehensive bundle. In addition to the aforementioned 100ml bottle of coolant, you get a pair of good-quality 140mm Pure Wings 2 PWM fans capable of speeds of up to 1,600RPM, Y-splitter cables for the fans and pump/CPU block, and addressing a frequent criticism of AIOs, there's even a small tube of thermal paste that's good for a couple of installs.

All the latest Intel and AMD sockets bar Threadripper are supported, and the only thing missing from the bundle is a lengthy warranty, with be quiet! defaulting to three years of cover, as opposed to the five we're accustomed to seeing on liquid coolers from some of the dearer rivals. On the plus side, we are told that adding coolant won't invalidate the warranty, irrespective of how many times you choose to top-up. 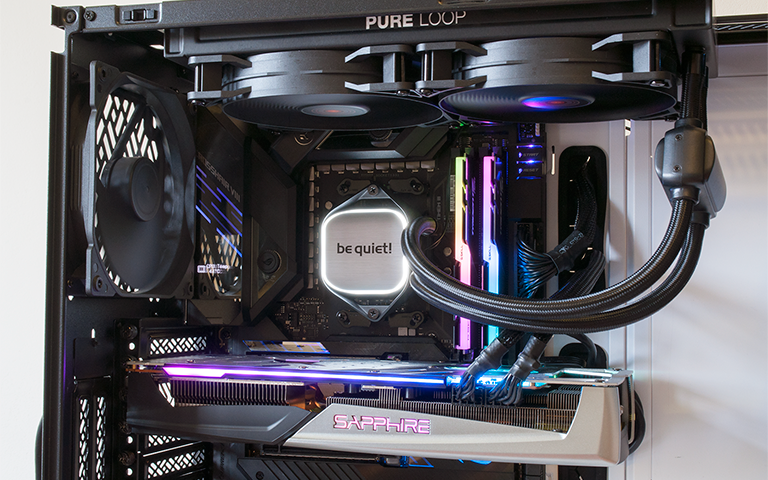 Installing the Pure Loop 280mm in our Ryzen 9 3950X test PC proved straightforward enough, though be quiet! opts against using the default AMD mounting brackets, so you'll need to whip those off prior to installing the supplied components. As with most coolers, it's simply a case of securing the brackets to the motherboard before screwing the CPU block on top, and be quiet!'s all-black mounting kit does a good job of blending into the background.

There's no thermal paste pre-applied to the nickel-coated coldplate, so the onus is on you to use the supplied tube to the best of your ability, and when it comes to cabling, you'll probably want to use both splitter cables. There's a Y-connector for attaching both four-pin fans to a single header, and another for hooking-up the three-pin cables from CPU block and pump to a SATA power connector. It's a good-looking cooler in its own right, however the fixed-white LED does clash with the other RGB components in our rig, and the relocated pump assembly isn't exactly discrete. Enough of the chit-chat, let's see some benchmarks, shall we?