Last year's 4000D proved to be a satisfactory facelift for Corsair's chassis portfolio. Starting afresh with new branding and a sleek, modern aesthetic, the £80 case, short on frills, looked the part and served as a solid foundation on which to introduce more expansive models in the months ahead.

Turns out we didn't have to wait long as Corsair is now introducing the 4000D's bigger brother, the aptly titled 5000, in a multitude of flavours. The range-topping 5000X, priced at £170, is the flamboyant choice and sports tempered glass on four sides as well as three RGB fans. Next in line is the £140 5000D Airflow, which reverts to a regular windowed side panel, two non-backlit fans and, as the name suggests, a full-height mesh front panel. Lastly, and in for review today, the regular 5000D, also at £140, swaps out the Airflow's mesh front panel in favour of solid steel.

All three models are available in a choice of black or white, and it has to be said, we're quite partial to the pale 5000D. Light-coloured chassis can be hard to pull off, but Corsair's done a decent job, with good consistency between the various white panels, solid build quality, a full-size window whose bezels aren't overly large, and grey trim that contrasts rather nicely. The whole case has a crisp, clean feel about it, and though it's a little early in the year to be making bold predictions, we're already wondering if we'll see a prettier mid-tower chassis in 2021.

We even like the colourful splashes of Corsair branding. Following in the footsteps of the 4000D, you get yellow bands on the rear thumbscrews, a small yellow square on the internal cable cover, a yellow tab on the top mesh lining, and an upgraded port arrangement that includes two yellow USB Type-A ports alongside USB Type-C and a combination audio jack. Simple but effective.

If it's a sleek, minimalist exterior you're after, why not opt for the more affordable 4000D? Well, if you need space for a more exotic build, 5000D's larger 520mm x 245mm x 520mm frame represents a 36 per cent rise in overall volume, leading to healthy gains in most regards. GPU clearance is increased from 360mm to 420mm, the number of dedicated SSD mounts has doubled from two to four, and there are now a total of 10 fan mount locations, as opposed to just six on the 4000D.

What's interesting for the liquid-cooling crowd is that Corsair has managed to find space for three optional 120s on a dedicated panel alongside the motherboard tray, giving users the ability to side-mount a 360mm radiator. To maximise airflow the rear side panel is outfitted with a mesh vent that comes pre-lined with a magnetic dust filter, and around front the cable cover is easily removed while the PSU shroud extension can be swapped for an L-shaped attachment that opens up the front of the case. An intriguing option, though do be aware that radiators can't be mounted to the front and side simultaneously.

In addition to the side mounts, you have room for three 120s or two 140s in the front, three 120s or two 140s up top, and a single 120 at the rear. Installing a good-sized radiator or two shouldn't be a problem, however wider support for 140s would be preferable, and at this price point it's a shame only two basic 120s are included as standard; a front intake and a rear exhaust. On the plus side, and as another point of differentiation over the 4000D, Corsair includes a six-way, SATA-powered fan hub as standard, allowing for control of multiple case fans from a single PWM header.

There's plenty here that works well. Cables are easily routed above, below or to the side of the motherboard, the front cable cover keeps excess clutter out of view (Corsair even includes a 90-degree adapter for that pesky USB 3.0 header), a good amount of Velcro ties are included in the bundle, and the dual-bay hard disk cage is easily moved further along the PSU compartment, or removed entirely. Ongoing maintenance is well-thought-out, too, with Corsair including easily-accessible filters on the top, front, side and bottom of the case, and if you've got a graphics card worth showing off vertically, the 7+2 PCIe arrangement from the 4000D has been carried over. 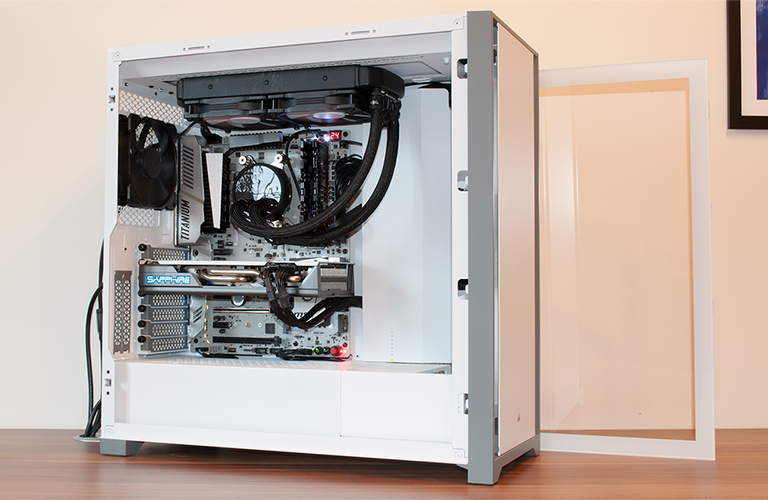 Building into the 5000D is consequently hassle free, though we do feel as though a little extra refinement would elevate the out-the-box experience from good to great. The unusual door covering the back of the motherboard tray, for example, swings open easily and can quickly be removed from its hinges, but doesn't have a secure latch and has a tendency to keep popping open. There's also no sound-dampening foam to help soak-up vibration - that's something we like to see on the non-Airflow model - and while it's handy having the ability to adapt the PSU shroud for additional cooling, the visible seam two thirds of the way along is playing havoc with my OCD.

Corsair's side panels could also be more user-friendly - the four front notches aren't as easy as the pop-on, bottom-hinged mechanism used by rival manufacturers - yet there's no doubt the 5000D will serve as a solid foundation for many eye-catching rigs in 2021. We're looking forward to seeing what enthusiasts can do with it, and we reckon the white model in particular will bode well for RGB lighting.