At this end of the market we'd expected an integrated fan controller, or at least a splitter cable, particularly given the number of fan-mounting locations. The case can officially accommodate three 120s or two 140s in the front, two 120s or 140s in the roof, two 120s or 140s on the floor, and either a 120 or 140 on the rear. Enough for a couple of radiators at least, however due to the enclosure's relatively short depth, installing a 360mm radiator in the front would block the ability to install another rad in the roof or on the floor. Corsair's most likely assuming that users will keep the three front intakes as they are, while adding a top or bottom radiator, or both. Not a bad shout, given that the front glass is going to stifle those intakes to a certain extent.

Elsewhere, we have an 8+2 expansion slot arrangement, allowing for a vertical graphics card installation with an optional PCIe riser. Always nice to have the option, but with no PSU shroud in the front of the case (remember, the supply is installed in the rear chamber), a vertical graphics card is made to float in the air rather than sit on top of something and doesn't look quite right. 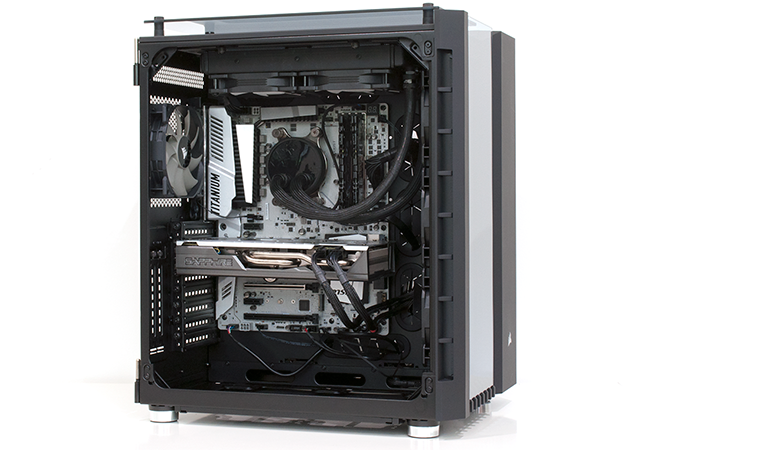 Our liquid-cooled AMD Ryzen test platform has gone with ease, and you start to identify a few rather nice touches throughout the build process. The top and front fan rails, for example, are removable by undoing a pair of thumb screws, making it easy to assemble a radiator outside of the case before fixing it in place.

Despite the floating panels, it is also good to see Corsair take dust filtration into account in all the relevant areas. The front trio of fans is lined with a mesh sheet, there's a pull-out filter beneath the case, and a magnetic filter is included for use at the top. What's confusing at first but rewarding when you figure it out, is that the magnetic filter doesn't appear to fit the top of the case; turns out it needs to be sandwiched between the radiator and the removable fan rail, which provides a seamless look but is of course trickier to clean. Another small niggle is that the bottom filter, which pulls out to the side, can only be removed by opening the side panel. Hardly any bother considering how easy the panel swings open, but it's worth pointing out nonetheless. 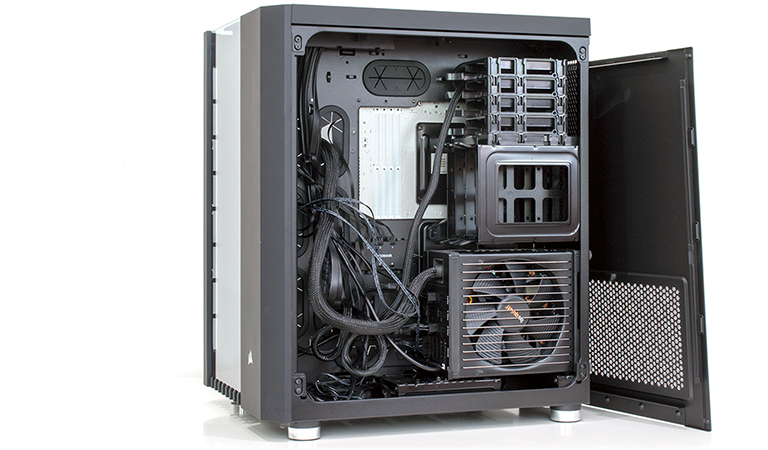 What's interesting is that, while the final build looks good (the chassis looks better in person, with the fans illuminated), we actually miss having a PSU shroud across the bottom of the case. Turns out that shroud is a good way of hiding those cables that come from below, and is it just me or does the case looks strangely bare without it?

The key advantage of a cube tends to be the secondary rear chamber, and it does prove useful. Cable management becomes less of a concern when you can effectively keep most of the clutter hidden from view, and there's enough space back here for a pump or reservoir using the mounting holes that line the front of the chassis. Heck, given the amount of room available, we're left wondering whether or not Corsair should have included a 5.25in optical bay for those who still want one, there's clearly scope to do so. Anyhow, that's enough deliberation for now, let's take a look at some numbers.