Now in its 10th iteration, Ubuntu 9.04, which supports servers, clients, and netbooks, provides 'faster boot-up times, ensures faster access to a full computing environment on most desktop, laptop and netbook models. Enhanced suspend-and-resume features also give users more time between charges along with immediate access after hibernation. Intelligent switching between Wi-Fi and 3G environments has been broadened to support more wireless devices and 3G cards, resulting in a smoother experience for most users', company representatives say.

Ubuntu has also been popular on netbooks. Canonical says that with 9.04 'For the first time, users can download the complete Ubuntu Netbook Remix to a USB flash drive directly from Ubuntu.com. Users can then install and run Ubuntu Netbook Remix on a wide range of the most popular netbook machines available in the market today.'

Supported until October 2010, anyone upgrading to 9.04? Clean reinstall or upgrade? Is it worth it on a six-month cycle? We'd love to hear your thoughts. 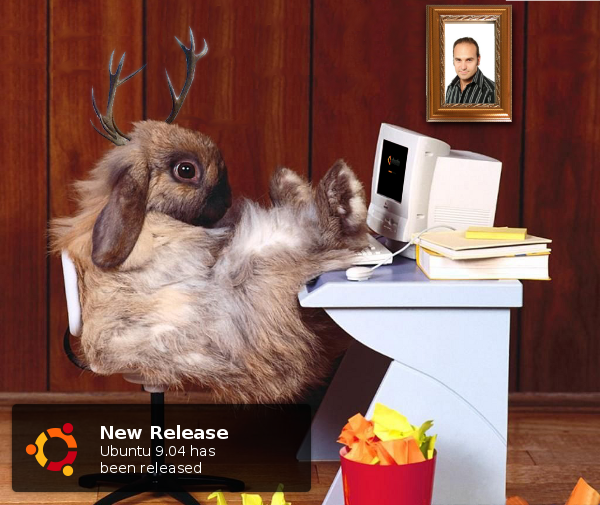 Haha Thats an ace picture :rockon2:
Posted by shaithis - Fri 24 Apr 2009 16:15
Where do they pull these names from? :confused:
Posted by simonw - Fri 24 Apr 2009 17:32
Did a clean install of the 64-bit desktop version instead of an upgrade from 8.10 because I had just bought a new HDD. I'm definitely getting faster boot times, the main advantage for me is that a lot of the newer apps are in the default repository. With 8.10, I had to manually add the PPA binaries and sources.

I had one hiccup, my internet account requires me to login with username/password. Therefore I had to use pppoe to set it up, in the 8.10 help file, it had the ADSL modem setup instructions but they are missing from 9.04. So I had to run the 8.10 live cd just to find out how to set it up. Even then, I was not able to automatically connect to the internet after a reboot. Luckily there was a doc in the ubuntu wiki which had a fix.

Also, updates were painfully slow for me at first. I had to manually choose the update server to get the normal download speeds.

I had no problems with 8.10 on the above 2 issues. Only time will tell if the latest release will be up to standard.