Indications that Valve is developing a 'play the game while its downloading' feature for its Steam PC software store have emerged. SteamDB creator, Pavel Djundik, noticed that Valve has been working on a technology which is referred to as "instant play", for this very purpose. This in-the-background development has been revealed on a recent posting on Free Patents Online, as Valve sought patents for its implementation(s) in May this year.

You might have heard of similar technologies on PC and consoles. In the HEXUS news section we reported on Xbox One FastStart back in June 2018, a system which introduced a download method which identified which files were needed to begin playing and prioritized the download of those files first. However, it seems like FastStart was a false start, as I can't find any more official info about it after a blog post about FastStart test games for Insiders published in Oct 2018.

On the PC side of things, stores like Battle.Net (Blizzard) and Origin (EA) have some similar technologies implemented for some games. As I understand it, the games which play nicely with these systems have been designed to work in that manner – so some development time has been expended to let you 'play the game while it's downloading', and these are much smaller platforms than PC-dominant Steam. 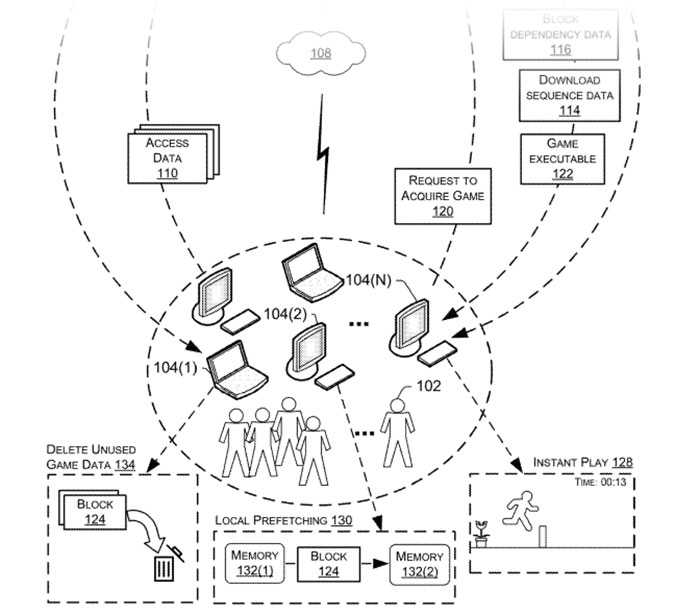 One of the killer features of Steam Instant Play, according to the patent papers, is that it is a platform solution that will work with any games on Steam, new or old, once the technology is implemented. In brief, the technology is described as working as follows; the Steam Instant Play system checks though the read operations of the game executables and determines priorities for downloads from this. Using this method, Instant Play should work for any title, allowing Steam to download start-up priority files, and continue to download in the background as you begin playing.

From the above description, it is pretty obvious that Instant Play will work better with some titles than others. Also, the system will probably get better the longer it has been gathering telemetry and has been in place. Logically, the download optimization apple-cart could be upset with developers regularly updating games and depending on the ways access to big DLCs and so on are provided.

Tracking file system read operations for instant play of video games, and for client-side discarding and prefetching of game data

Client machines running game executables of a video game(s) may utilize a file system proxy component that is configured to track read operations made by the game executable during a game session, to generate access data based on the tracked read operations, and to report the access data to a remote system. This telemetry approach allows the remote system to collect access data reported by multiple client machines, to catalogue the access data according to client system configuration, and to analyze the access data to generate data that is usable by client machines to implement various game-related features including, without limitation, “instant play” of video games, discarding of unused blocks of game data to free up local memory resources, and/or local prefetching of game data for reducing latency during gameplay.

I'm not sure whether it is within Valve's scope, but the Instant Play functionality could be smoothed or enhanced with some cloud game streaming capabilities too.

Before I sign off, it is worth commenting that Valve hasn't officially announced anything along the lines of Instant Play at the time of writing. This could be another one of those patents which comes to light but never precipitates a real-world application or product.

Posted by Tabbykatze - Thu 23 Sep 2021 14:14
I can see this existing and being possible/implementable by Steam 100%. You can quite easily map out the first few hours of a game in many varying ways to work out how to asset stream a game not designed for asset streaming.

This will be really neat, especially for games that have 60GB+ installs, you really want to play it but it's only half downloaded, well with this you can start playing and it continues.
Posted by ronray - Thu 23 Sep 2021 15:45
“However, it seems like FastStart was a false start, as I can't find any more official info about it after a blog post about FastStart test games for Insiders published in Oct 2018.”

I don't know if it is based on ‘FastStart’ but most Xbox games support ‘Ready to Play’. Typically they can be played when around 30-40% of the game has been downloaded. I would not describe this as ‘Instant Play’ because it sounds like it would require the core game engine to be downloaded before you could play.

As suggested in the article perhaps the downloading could be combined with cloud streaming whilst the download is taking place but I'm not convinced that would be an acceptable experience. I supposed it could be an option but I'd prefer to wait for the local install rather than the compromises you get with streaming.

Another thought is that perhaps this is a system designed to pre download game data in the background based upon Steam's view of what you might be interested in. Then you just need the game .exe to play the game. That sounds a bit sneaky but I've seen similar things from the likes of Sky where they reserve space on their Sky+ boxes for them to push their own content onto it so you have access to it instantly. It is positioned as an added value but it really irritated me.
Posted by Nifl - Thu 23 Sep 2021 16:22
Good luck doing this with games that come in massive encrypted .pak files (looking at you, Unreal Engine).
FastStart was doomed from the start for that very reason.
For consoles it's a feature that has to be implemented by the developer.
I like the system Guild Wars had. You downloaded some base data and when you played the game it kept loading in the background based on a certain asset priority and when you went somewhere, it loaded the assets for that area first.
Posted by maxopus - Thu 23 Sep 2021 16:55
How would this work with online games that check file integrity at start to try to prevent cheating?
Posted by Gentle Viking - Thu 23 Sep 2021 17:51
If services like steam was excellent in regard to cheating in games, i would so be supporting it.
But as it is i wish steam was not there, along with other similar services