Yesterday, the HEXUS editor took a close look at AMD's FidelityFX Super Resolution (FSR) technology, with a deep dive into the tech and some pixel peeping of FSR in action in the first games that support it. Alongside that welcome new feature, a new driver, Radeon Software Adrenalin 21.6.1, was launched to support it, as well as support the new AMD Radeon RX 6800M Graphics for laptops, and the Dungeons & Dragons: Dark Alliance game.

If you visit the driver release notes, via the link directly above, you might quickly notice the truncated list of AMD Radeon products that it is compatible with, and which I have reproduced below. 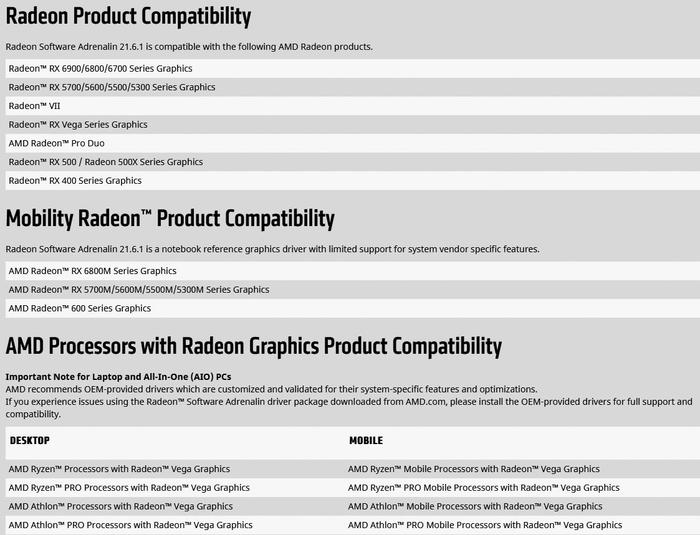 Notable by their absence are a lot of GPUs which were supported by the previous driver, version 21.5.2. In the briefest terms I can think of, this is because AMD has ended support for all its pre-Polaris (Pre-Radeon RX 400 Series) graphics products. Radeon Software Adrenalin 21.5.2 was the last driver to support this older hardware. Such graphics products are now moved to a "legacy model". 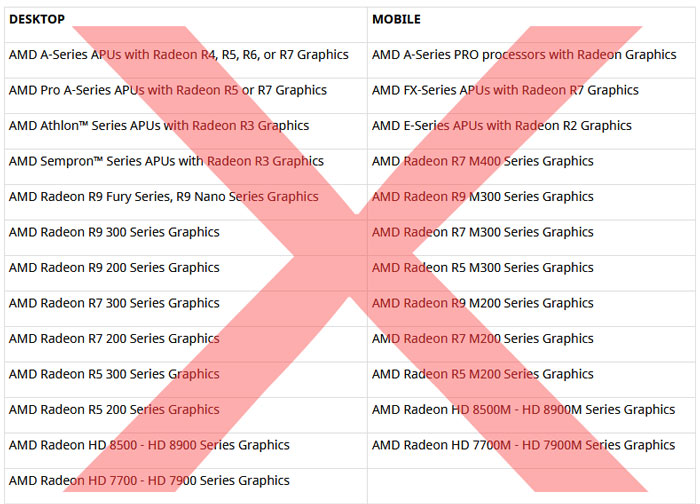 For the sake of completeness / clarity, the Radeon products which are no longer supported as we move from Radeon Software Adrenalin 21.5.2 to 21.6.1 are tabulated above. 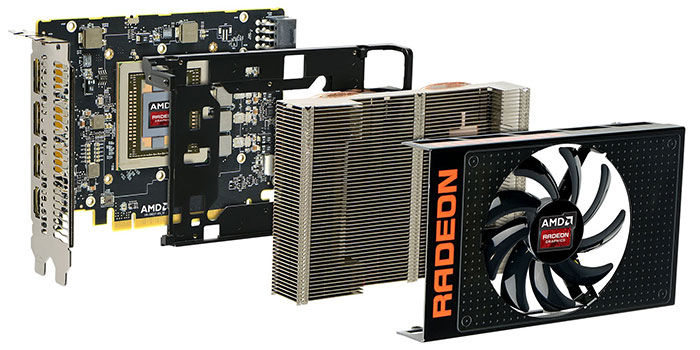 Cute but showed no mercy, the AMD Radeon R9 Nano from 2015

Windows 7 support gets the chop

AMD kept its axe sharp to not only prune its older graphics products from support, but Microsoft's Windows 7 64-bit. The above driver version transition moves Windows 7 to a legacy support model – which means only a severe security flaw will likely precipitate any update for systems running this OS.

AMD explains in a blog post that the above driver support shake-up was to enable it to "dedicate valuable engineering resources to developing new features and enhancements for graphics products based on our latest graphics architectures". Nvidia trotted out a similar statement last week when it announced the impending end to Windows 7/8/8.1 support in its Game Ready Drivers (October). Nvidia Kepler GPUs are to face the same fate as Windows 7/8/8.1 following the same driver release timetable.

So Nvidia is dropping support for anything older than their 2014 Maxwell series and AMD is dropping support for anything older than their 2016 RX 400 series in their current upcoming drivers. I suppose on the AMD side, if they “support” any model between the 7900 and Rx 300 series, it's all one big block as they were all variations and improvements on GCN.
Posted by DanceswithUnix - Wed 23 Jun 2021 11:51
The RX480 is five years old in a few days time, so that seems reasonable driver support that it is still going.

Though here in Linux land I'm on open source driver for my R9 285 so no change for me.
Posted by cheesemp - Wed 23 Jun 2021 13:58
To be fair to AMD they've been dropping new features onto these old cards for quite a while (advantage of GCN long life span). I've not seen Nvidia do anything for a card feature wise once they are 2 generations old (other than security patches). With my rx480 I'm still getting big changes such as FSR - Is an equivalent 1060 got anything for awhile?
Posted by Tabbykatze - Wed 23 Jun 2021 14:19

cheesemp
To be fair to AMD they've been dropping new features onto these old cards for quite a while (advantage of GCN long life span). I've not seen Nvidia do anything for a card feature wise once they are 2 generations old (other than security patches). With my rx480 I'm still getting big changes such as FSR - Is an equivalent 1060 got anything for awhile?

I think the only thing I'm aware of was the Nvidia Voice and Camera Background removal iirc?
Posted by 3dcandy - Wed 23 Jun 2021 15:39
Perfectly adequate driver support. 5 years in graphics cards is acceptable I think.
Does mean that the current cards I have need changing though and that will cost as the price is so high, though they *do* appear to be easing a tad