Google Earth shared had an interesting update on Thursday. The lesser used geographic resource from Google has added a new Timelapse feature where you can visually recognise how the world has changed over the last 37 years. As well as letting users check their own home towns and other areas of interest, the site has put together various highlight tours, and created hundreds of Timelapse videos that show a specific region and highlight a story about the changing planet in 2D and 3D.

The Google Earth project has been active for 15 years and Google says this is the biggest update since 2017. Google Earth seeks to create a 3D replica of the world, but it has now integrated 24 million satellite photos from the past 37 years and created "an interactive 4D experience" where that 4th dimension is time.

Google has put together an overarching video above to give you some exploring ideas, as well as highlight some of the biggest changes seen over the last 37 years. Most noteworthy for me were watching the development of Dubai UAE, the shrinking of the Aral Sea, and the greening of Greenland.

I tried to look at some home specifics, like some areas of the English Lakes I know well, and South Manchester, but disappointingly all I really saw was the quality of the satellite photos improve from blurry to pretty sharp. Perhaps I need more time to look around and to look more broadly. 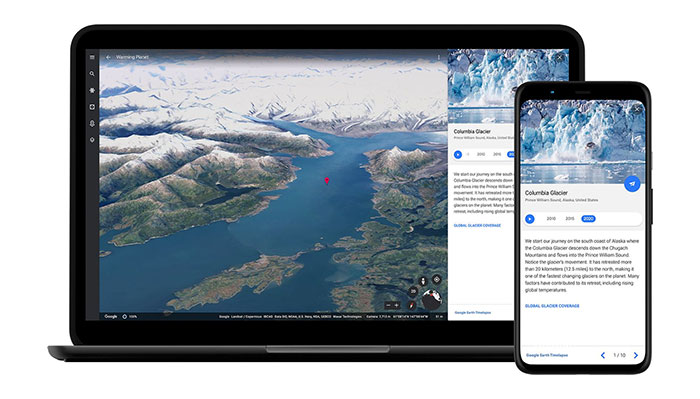 You can head on over to navigate Timelapse here, or check out the library of 800 Timelapse videos cureted by Google on YouTube.

Google Earth will publish Timelapse updates annually, thanks to agreements with imaging partners, for at least the next 10 years.

Posted by Ozaron - Fri 16 Apr 2021 12:18
This is nice and all but StreetView for some places hasn't been updated in 10 years! I want to view southern Finland damnit.
:P
Posted by Wirko - Fri 16 Apr 2021 12:37
I'm confused … I've had that for years in Google Earth (the standalone application), it's just that it wasn't packaged as videos, and animations didn't look very smooth because photos were taken at irregular intervals at various times of year.
Posted by rave_alan - Sat 17 Apr 2021 12:55
Google is doing something positive and really for free, a rare thing. And they will continue for 10 years!