Google Translate is a pretty handy app when you are travelling, or just on holiday abroad. Now, it is going to become even more useful and convenient thanks to a number of features that have been refined and added. Xinxing Gu, Product Manager for Google Translate, penned a blog post a few hours ago outlining all the nifty new features coming to this app.

One of the particularly useful functions of the Google Translate app I find is the instant camera translation. This works how it sounds: you just point the camera at a foreign language sign, notice, or menu, for example, and you can usually understand clearly what it is trying to convey. Sometimes writing for HEXUS I have to quickly make sense of a foreign language image with various blocks of text on it - like a photo of a promotional leaflet for a graphics card, written in Chinese or Spanish. Many times I just point my smartphone at the screen for any descriptions or bullet points that aren't obvious.

New in the latest Google Translate app is added support for 60 more languages in instant camera translation, such as Arabic, Hindi, Malay, Thai and Vietnamese. This is a big upgrade because previously only 28 languages were supported as translation target (thus new total is 88).

An even more exciting development is the expansion of the target languages field to include "into any of the 100+ languages supported on Google Translate," according to the blog post. This opens up the hitherto impossible feat of using the camera to instantly translate from Arabic to French, or from Japanese to Chinese, for example. 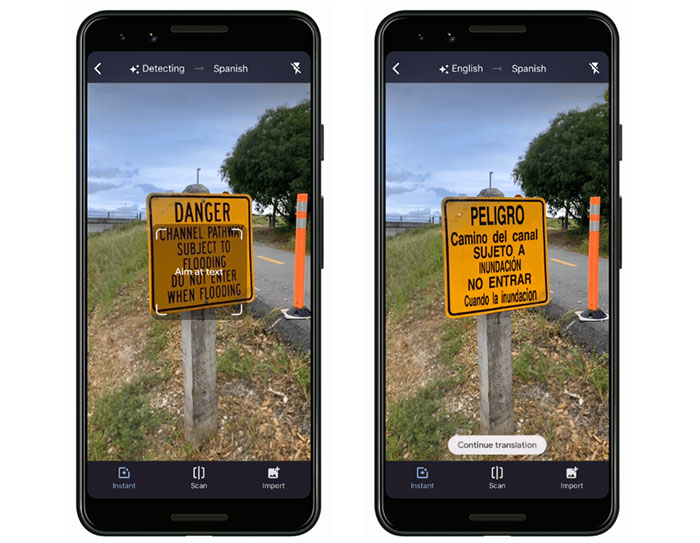 If you regularly have to adjust the source language for your camera fed translations you might also be happy to know that Google has added an auto-detect input language toggle. Google points out that this is handy for travelling in areas where multiple languages are commonplace, and I'm sure you can think of more useful use cases for this feature.

With the above feature benefits described, you probably won't be surprised to learn that Google has sharpened up the technology behind this app. The blog post says that for the first time, Neural Machine Translation (NMT) technology is built into instant camera translations. "This produces more accurate and natural translations, reducing errors by 55-85 percent in certain language pairs," according to Google.

A common concern when travelling is Wi-Fi and/or cellular data availability. Google has allowed user-selected language data pack downloads (for offline use) for some time now, and these still work well. However, it is noted that "when your device is connected to the internet, the feature uses that connection to produce higher quality translations".

Last but not least Google has ironed out the user interface so that it is less prone to translated text flickering as you position your camera. Steady translated text overlays make the translations easy to read and understand quickly.

Out with Calibri – in with Tenorite, Bierstadt, Skeena, Seaford, or Grandview?

I really liked the Lumia 920!
Posted by Ttaskmaster - Thu 11 Jul 2019 17:37
So an app that essentially accesses the same data sources as the Google Translate website, combined with the OCR software of, say, Adobe Scan, now both using the camera to get text and translate it, with the big selling point that it's merely auto-enabled by default?

Now I don't have to take a photo in Scan, auto-OCR it, and then copy it to a webpage. I need only press one button instead of three… woohoo.
Seriously, wow. I am stunned… more stunned that this facility was not already available, but hey.
Posted by loftie - Fri 12 Jul 2019 10:13
I still use my L920. Going to have to stop this year though as Whatsapp is dropping support. Shame because, ignoring the bugs, I really like WP8.

There was something else that was mentioned to me in conversation the other day WRT Android and I remember turning round and saying something along the lines of “you telling me your new huawei can't do what my old WP can do?”. Wish I could remember what it was.