Boréas Technologies and Cirque Corporation (the latter perhaps best known for the GlidePoint tech and Alps keyswitches) have announced a next-gen laptop trackpad module based on piezo technology. The new trackpad is touted as being slimmer, more accurate, and more reliable - while providing a rich haptic touch experience.

Though the above news and linked press release might not butter your parsnips, according to Daniel Rubino (the editor of Windows Central), this is new touchpad tech is going to be a "big deal" in 2022. Current capacitive trackpads are characterized by Rubino as relying on long-in-the-tooth technology that is "prone to breakage, can have phantom or dead zones, and are fundamentally inaccurate". Apple's offerings are only a little better, he opines, with the touchpad largely capacitive but the 'Taptic Engine' replacing physical clicks with a couple of solenoids.

The new Boréas and Cirque solution uses piezo tech in the place of capacitive technology and the partners claim to deliver "a new notebook trackpad module that combines force sensing and HD haptic touch in a thin, light, low-power platform that helps streamline machine size and extends battery lifetimes". Moreover, this single chip solution can allow device makers to make much bigger trackpads without driving up costs, says Windows Central. Overall, it sounds like a big win, but users will have to A/B such a device against the older and established tech to get a feel for the worth of the experience.

A useful table makes clear the differences in trackpad tech.

Microsoft is making trackpads that are compatible with the Windows Precision driver mandatory with Windows 11, which is a good start for ensuring standard snappy and responsive touchpad control, with standard Windows gesture support. However, this major improvement driven by piezo trechnology isn't really going to be established that quickly. Boréas and Cirque need big names like Lenovo, HP and Dell to fit their top machines with their trackpads and that will get the ball rolling. Nevertheless, the companies are confident that their collaborative effort will become the first mass market Windows haptic trackpad solution – perhaps one or more such deals has already been inked... 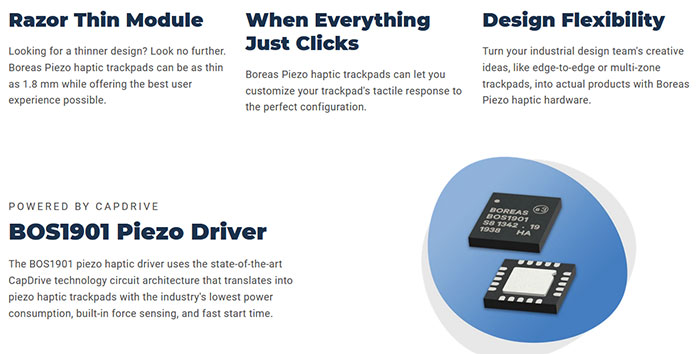 It is noted that Microsoft already works closely with Boréas and Cirque. As the haptic tech can sense various degrees of force, it is even teased that the new piezo trackpads could offer a new dimension in touch control with Windows 11 device support.

Ttaskmaster
Strange that people are still trying to push force-sensing and haptic technology, when fighter pilots already trialled it to death and found it abysmal at best…

I think most of these people aren't using it to control a plane at mach 1.6.. ;)

I know what you mean though - same with touchscreen controls on cars. But for trackpads and phones it makes sense where you don't actually want to have to engineer in physically moving components yet want to give the user the impression of having pushed a button. iPhones have got this pretty well nailed, other makes, a bit less so.
Posted by Tabbykatze - Thu 12 Aug 2021 15:15

Ttaskmaster
Strange that people are still trying to push force-sensing and haptic technology, when fighter pilots already trialled it to death and found it abysmal at best…

It seems generally agreed it was a stupid decision to use touch screens on the F-35s, but these are laptops…for users…in an office :P