There are some signs that Asus and Noctua are going to team up to create graphics cards in the not-too-distant future. Whether the partnership will be an up-front 'Asus x Noctua' billed collaboration and produce something as spectacularly beige and brown as the Redditor RS-kuuskyt's modified Noctua-style ROG Strix GTX 1080, pictured below or not, is the biggest question we have at this stage. 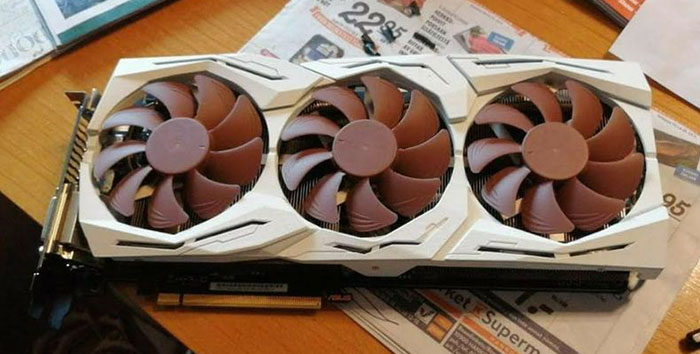 Something which may look somewhat like the above modded card has been listed by Asus reps with the EEC. The last GPU in the trademarks listing is clearly a Noctua collaborative effort, with its 'RTX3070-8G-NOCTUA' product code. 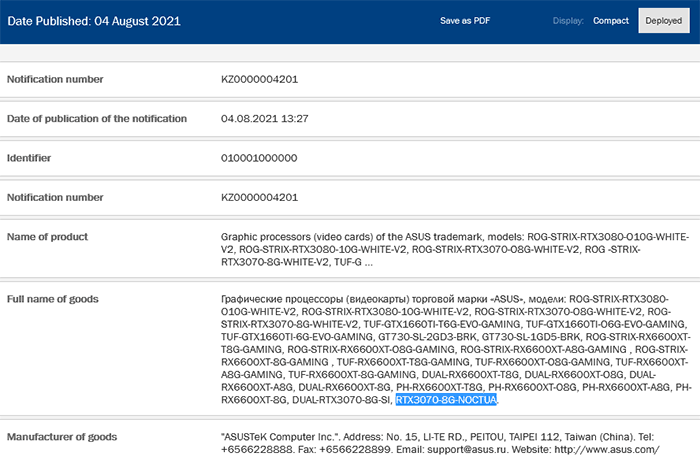 As I mentioned in the intro, this is an interesting collaboration to see occur, but we don't know the scale of it yet. For example, we have previously seen Asus and Noctua collaborate on the Asus ROG Ryujin 240 RGB AIO Liquid CPU Cooler. It isn't a glorious beige and brown creation, the only way you will know that Noctua tech is uses is from looking closely at the radiator fans or the spec sheet.

There is a sign that the partnership could be more up-front with regard to the GPUs, though. The naming is the first indication, and secondly some communications between tech site HWcooling and Noctua, spotted by VideoCardz, seems to point to a high-profile graphics card collab in the pipeline. According to the exchanged emails, we will be hearing more, "hopefully soon".

Posted by Corky34 - Thu 05 Aug 2021 10:35
Yes please on the GPU, i quiet like the brown & beige, not that i have a windowed case. I hope it's more than just Noctua fans on it, I'd like to see Noctua's take on the cooler itself.
Posted by FRISH - Thu 05 Aug 2021 10:49
Could be interesting to see how it holds up.
Posted by QuorTek - Thu 05 Aug 2021 11:03
Colour wise it looks like something you would do in the mid 80ish.. kind of retro, the color does not matter to me, as I am not going to look at it… all this hysteria with noise and whatever, you can solve or reduce quite a bit of it, by just putting the PC under the table or something, no idea why people insiste having it on top of the table.
Posted by LSG501 - Thu 05 Aug 2021 13:40
Not a fan of the colours in the mock up, hopefully it will be the grey versions, but anything to ‘quiet down’ the gpu is a good thing imo.
Posted by samuraiweasel - Thu 05 Aug 2021 13:41
Considering even with a window that I'm the only one looking at the damn thing I'd take a Noctua brown cooler any day as long as it doesn't come at too much of a price hike compared to other versions.