Asus has published a teaser for the successor to its ROG Ryujin AiO cooler. The new model develops the modest cooling block display stripe present on the original into a full coverage rectangular display. Other than that we can't see any major changes to the product.

The original Asus ROG Ryujin AiO cooler came with what was described as the 'LiveDash' display which cut a stylish swash across the cooling block, but it was only a 1.77-inch OLED unit. This CPU cooling block was attached by braided flexible tubing to a 240mm radiator, and the new model doesn't look materially different in this regard.

The big change-up with the Ryubin II is most evident on the cooler block side of the equation. It appears t forego much of the style in favour of usable screen area. On the Ryubin II the whole rectangular CPU cooling block area is taken up by a 3.5-inch diagonal display (with some quite fat bezels). 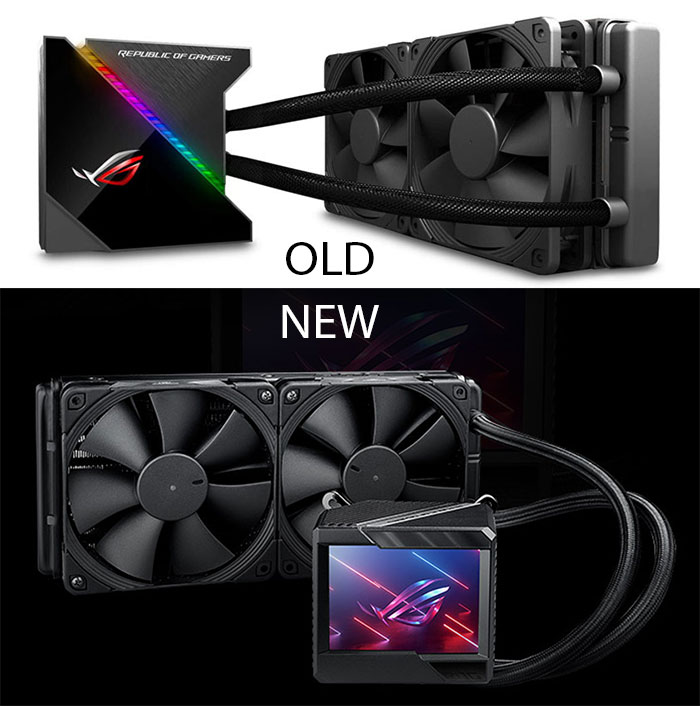 In its teaser Asus says that the ROG Ryujin II AiO cooler's new display is adept at displaying system stats or custom graphics – as well as being a display for Aura Sync Addressable RGB lighting. The radiator, cooling block, and display make this "the ultimate thermal solution for your gaming rig," asserts the PC, devices, and components maker.

Momomo_us spotted this addition to the Asus ROG CES 2021 pages, and VideoCardz has followed up by finding this AiO cooler update mentioned and pictures by Juan Jose Guerrero III on the official Asus PC DIY group ion Facebook. 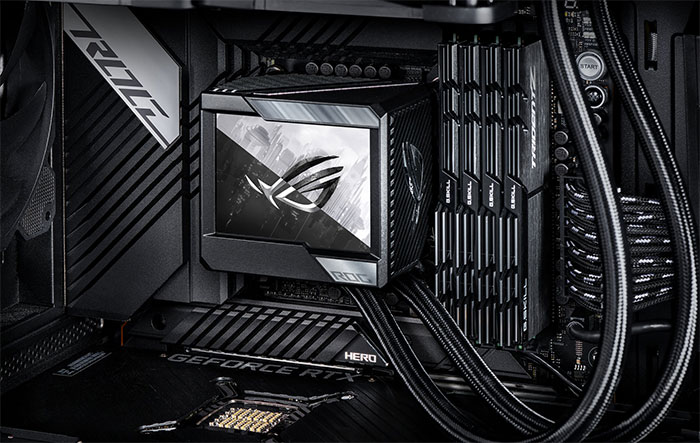 In Guerrero's image, above, you can see the Asus ROG Ryujin II AiO cooler installed on a system featuring the Z590 ROG Maximus Z590 Hero motherboard with the Asus eye logo displayed on its screen.

At this stage we don't have firm ROG Ryujin II availability or pricing info. However, it is said to be "coming soon," and you can keep in mind that the predecessor sells for nearly £200.

Posted by Ttaskmaster - Fri 22 Jan 2021 13:28
So basically they're starting to catch up with what Aqua Computer have been doing for a while now, then?
Posted by QuorTek - Fri 22 Jan 2021 19:33
Honestly… I am only interested in one thing, can it keep my CPU under or at max 40 degrees all time without to much noise… or just another hoax product… with cheap liquids that wont cool proper.
Posted by DanceswithUnix - Fri 22 Jan 2021 21:19
That needs to display a little goldfish swimming back and forth.
Posted by philehidiot - Mon 25 Jan 2021 11:00

DanceswithUnix
That needs to display a little goldfish swimming back and forth.

Or spinning helplessly around an impeller.

Also, what does the word “impeller” have to do with imps?
Posted by zephyrv - Thu 28 Jan 2021 19:24
The z73 had pretty good cooling performance in addition to the gimmick of the LCD screen. This seems like a step further, it's definitely possible to do it well it's just for a niche audience who is willing to spend that much extra for a meme screen. The z73 went on sale recently and people got very excited even though there were better and cheaper alternatives