You are here:
Cooling Industry News

PC enthusiasts are always on the lookout for smaller, quieter, more efficient cooling solutions and an MIT spinoff company that has recently come out of stealth mode, thinks that it has the answer. JetCool Technologies has recently emerged after five years developing its patent-pending twist on microjet cooling. On its home page it has some pretty big claims; firstly that its cooling tech is 10x better than rival solutions, its coolers are 10x smaller than rivals, and thus it is an attractive, eco-friendly choice for those who need to push their devices to the limits of performance.

The technology behind JetCool's flagship product is described as a "twist on microjet cooling [that] uses small jets of high velocity fluid to cool the device". Another key feature of JetCool cooling is that the cooling fluid isn't passed over a surface like a heatsink or cold plate but instead "aimed directly at the surface". Check out the diagram below to see the tech comparison between traditional and JetCool cooling.

Thanks to this application of the microjet technology JetCool coolers "offer exceptional cooling performance for high power electronics at the chip or device-scale," says the firm. It has provided the diagram below, which charts the heat transfer coefficient between JetCool and rival cooling technologies. It is explained that thanks to the velocity of the sub-millimetre fluid jet, the jet passes through the thermal boundary layer at the surface, "producing very high heat transfer coefficients in the impingement zone". 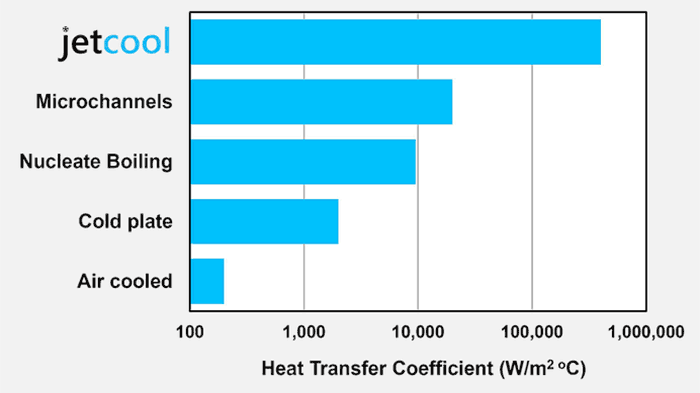 In an EE Times article which contains some quotes from JetCool CEO Bernie Malouin, the scope of cooling applications for the technology is discussed. JetCool thinks its tech will appeal to data centre based CPUs, GPUs and ASICs, EV-based computers, and networking components. On the firm's product pages you will see microjet-based coolers purposed for bare dies, component level cooling, and board level cooler designs. Among the products it is the latter category where JetCool thinks solutions for desktop PC enthusiasts will be in demand. 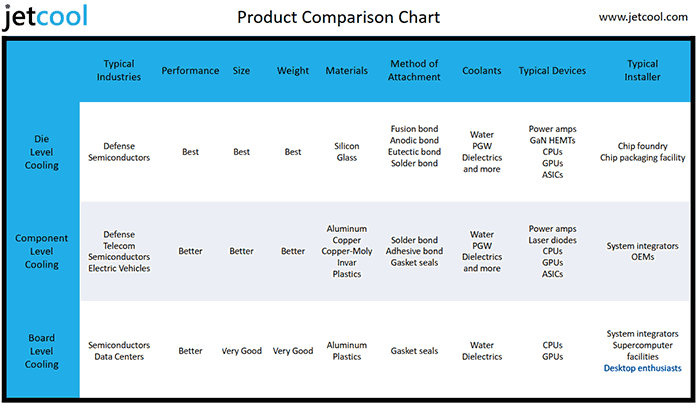 If you are in the chip design business or even just an enthusiast, JetCool has a tutorial with downloadable simulation that will help you determine what your chip's max temperature or power could be if you switched to microjet cooling. You need to sign-up here if you wish to download the step-by-step tutorial and Solidworks Simulation file.

Related reading: An innovative intrachip microchannel cooling system reported upon by HEXUS back in October 2017, was precipitated by the same initiative, launched at MIT in 2012. That project was funded by DARPA.

Posted by Zak33 - Wed 10 Jul 2019 15:52
I guess, if it's liquid firing at the surface of the CPU, then the seal around the edge will need to be engineered into the CPU, so that it's a perfect seal for ever. I don't forsee many water tight seals, just pushed onto the surface of a CPU, sealing 100% correctly for the life of a CPU under the pressure needs for the jets to work AND the liquid to then pass back out to the reservoir again. Water oozing out of a seal pressed against the CPU would be … sub optimal
Posted by Ttaskmaster - Wed 10 Jul 2019 16:07
That thing in the picture dun't look 10x smaller, neither…
Posted by Zak33 - Wed 10 Jul 2019 16:22

Ttaskmaster
That thing in the picture dun't look 10x smaller, neither…

As for the sealant, it'll depend on a few factors. These jets probably don't need to be proper jets as we're imagining but just enough to get convection working faster. I don't have Solidworks so I can't download and run their simulation. I expect that you won't install the chip on to the mobo and then the cooler on top, but you'll install the chip into the blue section of the cooler (you can see the multiple sealing nuts around the black edge), be expected to run a pressure and leak test before installing / running and then bolting the whole thing into the socket as one. I'd have thought you'll end up modifying the socket to accept this but it's an enthusiast part after all. I can't see you'll be able to make a seal of the standard required any other way.
Posted by Dashers - Wed 10 Jul 2019 17:08
I don't think making a water-tight seal against the top of a CPU is an especially tricky task to achieve. We always bolt on heat-sinks with an alarming amount of pressure against the chip. Making something reliably water-tight isn't especially hard - just ask all those people who assemble their own water-cooling rigs.