Researchers from Kiutra Gmbh, a spinoff of the Technical University of Munich (TUM), claim to have developed a commercial system which can cool things down to very near absolute zero (-273.15°C). Some of the attractive qualities of this new system is that it can do its cooling based upon magnetic technology, can maintain this ultra-chilled temperature 'permanently', and requires no rare and costly liquid gases such as the isotope helium-3 to operate.

In a press release the researchers say that temperatures close to absolute zero are used for essential research in the field of quantum physics and for the development of technologies based on quantum mechanics. It is hoped that the new cooler will help more and more quantum technologies leap from the lab to commercial applications. 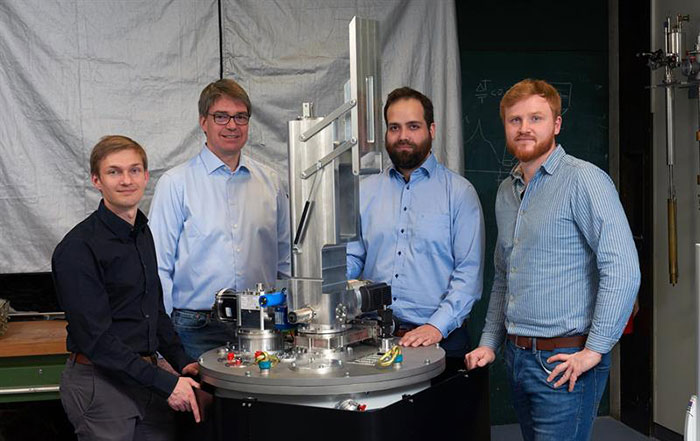 While concepts for permanent magnetic cooling systems have been around for a number of years, the TUM team, consisting of Alexander Regnat, Jan Spallek, Tomek Schulz and Prof. Christian Pfleiderer (pictured with the system above), say that previous implementations have been challenging and time limited, and thus held-up their widespread use.

Alexander Regnat summed up the appeal of Kiutra's technology. "We are the world's first commercial supplier of a cooling system that can magnetically achieve temperatures close to absolute zero (near -273°C) on a permanent basis," said Regnat. "Our great advantage is that we do not need expensive helium-3. All we need is electricity."

A press release hosted by Science Daily explains that the quantum refrigerator concept isn't a million miles away from the fridge in your home. "The superconductor fridge is similar to a conventional refrigerator, in that it moves a material between hot and cold reservoirs. However, instead of a refrigerant that changes from a liquid state to a gas, the electrons in a metal change from the paired superconducting state to an unpaired normal state."

Rather than food, the superconducting quantum refrigerator will store things like qubits, the basic units of quantum computers, by placing them on top of the stack of metals. Alternatively they might be used to cool quantum sensors, which measure light very efficiently and are useful in studying stars, or to develop more efficient MRI machines.

Ozaron
Didn't dive into the links, but I'm noting that there's no mention of *how much* electricity….
:)

Something that jumped out at me too. I'm going to guess (due to my lack of knowledge and lack of clicking on links to check if it's pointed out in them) that it would probably consume a fair bit of electricity and thus would need something like the recently announced SuperFlower 2500W PSU. :P