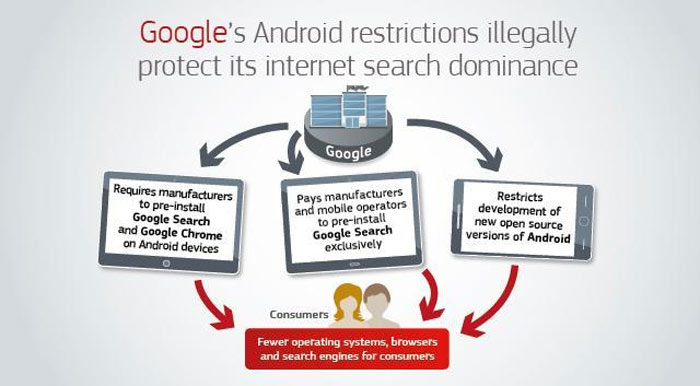 The effect of Android restrictions

Ahead of the ruling on the fine, and deciding on the scale of the fine, Google had already put forward counter-arguments concerning the above three points. Respectively, Google has claimed; tying of the Google Search app and Chrome browser were necessary to allow Google to monetise its investment in Android, financial incentives for exclusive pre-installation of Google Search across the entire portfolio of Android devices was necessary, and its restrictions on manufacturers wishing to use Android Forks were necessary to prevent fragmentation of the Android ecosystem.

Google has previously been in trouble for its business practices in Europe. In 2016 the Commission came to the preliminary conclusion that Google has abused its dominant position in a case concerning AdSense. In 2017 the Commission fined Google €2.42 billion for abusing its dominance as a search engine by giving an illegal advantage to Google's own comparison shopping service. 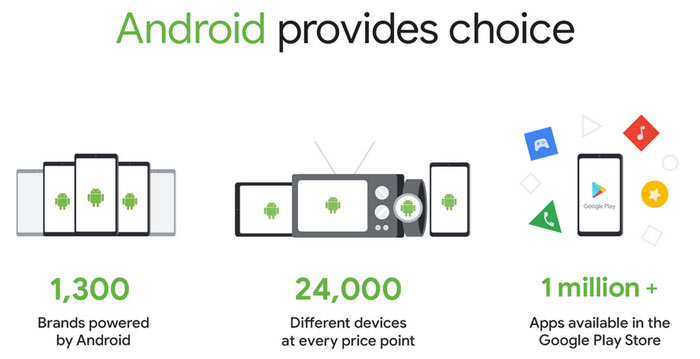 In response to the EC decision Google's Sundar Pichai Tweeted that "Rapid innovation, wide choice, and falling prices are classic hallmarks of robust competition. Android has enabled this and created more choice for everyone, not less. This is why we intend to appeal today's Android decision". He followed through with a blog post which builds on the Tweet's argument.

Does anyone believe that the benefits of fast innovation, wide choice and falling prices could not have been enjoyed without Android? It sounds like a lot of those benefits come directly from the smartphone component hardware designers and Far East smart device manufacturers.

On the topic of the Far East, China, which doesn't play fair with Google as far as including its search and services on phones by default, might be a greater contributor to "rapid innovation, wide choice, and falling prices", depending on how you look at things. However, American corporations bend over backwards to please China - like crashing Apple iPhones that use the Taiwan flag emoji - so they should be more open to the business fairness demands of their allies in Europe.

Posted by Ozaron - Thu 19 Jul 2018 11:51
So when do we sue them for listening in on the microphone of every Android device and harvesting advertising potential with it?
Posted by atemporal - Thu 19 Jul 2018 12:28
given that half the time I use my phone is when I'm curling one out, and the limited range of noises that go with it - they are welcome to listen in all they want. Believe me they'll not want to for long. :mrgreen:
Posted by Tabbykatze - Thu 19 Jul 2018 12:36

Ozaron
So when do we sue them for listening in on the microphone of every Android device and harvesting advertising potential with it?

That has never been proven and if every android phone was listening and siphoning data I think far more than just a couple of grumbly forum people would be in uproar.

I think this should be appealed as Google are trying to prevent the cataclysmic breakdown of the Android product by making sure it is kept within a strict boundary. I don't doubt there are aggressive incentives to make sure Google Apps stay on but I also think that's part of their Google Play Store certification for a handset. You get this but this comes with it part and parcel. If they don't want that, don't use Android and make your own custom firmware.

However, if this leads to manufacturers being allowed to create their own roms and Google being forced to allow Play store on any of these (literally) homebrew firmwares then I dread the Android of the future. If this does happen I can see users having to navigate a minefield of different versions and forks of android and will contribute further to manufacturers not supporting a phone even quicker because security updates would be harder to integrated across the spectrum. This kind of ruling could set a precedent for Androids future and cripple it if Googles hands get tied.

Personally, Android should have been taken out the public space around v4 and then become a solely owned and produced OS under the Google Umbrella only. Forks can be done from the v3 onwards but it should have stayed solely in Googles namespace. Then there are the arguments of “What about Cyanogenmod and OxygenOS and others?”, yeah so what? I've used both and neither perform as well as stock android and some of the features are cool but not enough for me to go “Wow, way to go guys, you made something different”.

And I said on another thread from another news outlet, what about Windows Mobile? If it was still around, would they have been sued because they lace and integrate Bing everywhere!

has prevented manufacturers wishing to pre-install Google apps from selling even a single smart mobile device running on alternative versions of Android that were not approved by Google (so-called “Android forks”).

The biggest load of horse manure in that, what other major versions are there or are they just wanting to maintain their own in house Sony/Samsung specific version.

This just sounds like some whining children didn't get it the exact way they wanted so are tattling on the teacher.
Posted by LSG501 - Thu 19 Jul 2018 12:55
I've kind of got multiple views on this.

I could be entirely wrong about this, but I believe it's different because Apple aren't forcing any manufacturers to accept these terms. They install the said software onto their own devices and only their own devices.