It is worthwhile dipping into the industry news regarding DRAM and NAND price trends from time to time, especially if you are considering building a new PC in the coming months. Over the last few days TrendForce / DRAMExchange has shared some interesting reports into the trends in these industries. It seems like nothing drastic is going on but considering DRAM, it looks like graphics RAM is most likely to become more expensive. There is good news about NAND, the key storage component of PC SSDs, as it appears likely to continue its downtrend into Q1 2021.

TrendForce seems the DRAM market "slightly up" in Q1 2021 but the current quarter is looking to conclude with most DRAM markets slightly down. There are quite a number of diverse DRAM segments going this way and that so I'll include the market researcher's table directly below before further discussion. 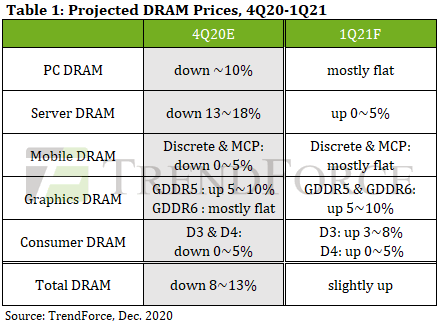 As we enter the New Year it currently looks like consumer-side PC builders have nothing much to worry about with regard to System RAM. It might trend up a bit but that will only be taking back a weak downtrend in the current quarter.

The Graphics RAM trend isn't such a pleasant picture though. Analysts have already seen graphics RAM climbing as much as 1 0per cent in the current quarter and both GDDR5 and GDDR6 are expected to become 5 or 10 per cent more expensive in the early months of 2021. Last but not least the recent earthquakes in Taiwan didn't have any impact on DRAM production (or any other semiconductor product output), according to TrendForce. 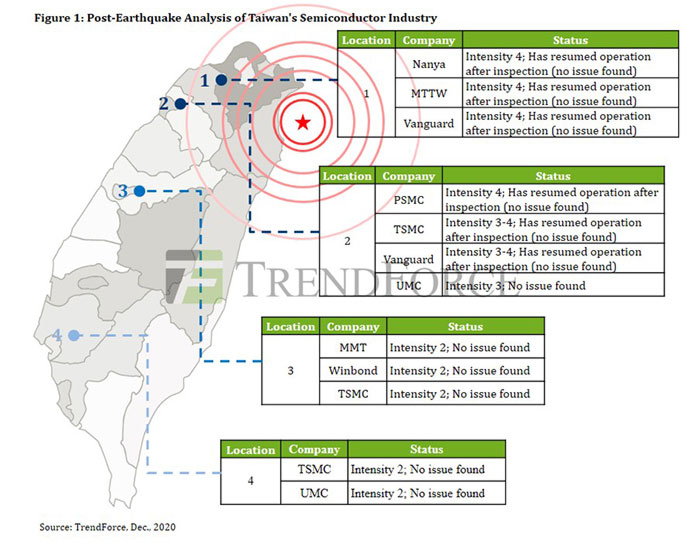 Oversupply is the consumer's friend, as long as you are looking to buy more SSD storage in 2021. TrendForce sees client SSDs ending as much as 10 per cent down in price by the end of this year and continuing to fall by as much as 10 to 15 per cent in Q1 2021. 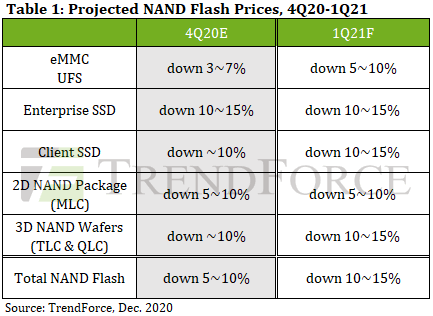 The analysts note that "the number of NAND suppliers far exceeds DRAM suppliers, and the bit supply remains high," so this downward pricing trend looks like it will have legs continuing into 2021. Moreover, most NAND makers are increasing their NAND flash bit output capacities with 3D IC layers increasing (e.g. Intel's recently announced 144L NAND SSD and Hybrid devices.) In brief – don't rush to upgrade storage.

Posted by Corky34 - Thu 17 Dec 2020 13:17
I know we get a lot of these memory price predictions and this no reflection on Hexus, but i was wondering how accurate these market watchers are, there's no way I'm going to look into it but it would be interesting to see how often their right.

In other words is it sensible to make purchases based on them saying prices are going to go up or down?
Posted by LSG501 - Thu 17 Dec 2020 13:32
Honestly… as much as I'm sure everyone here wants the best prices (to be fair pc's could be a bit cheaper overall imo) we're basically forced to buy at the prices they are when we need to upgrade.

If we can hold off and/or wait for bargain prices to turn up then great but most of us likely need to upgrade at a certain point because we have to, not because we want to.
Posted by mers - Thu 17 Dec 2020 14:04
I basically only buy as I need , normally when upgrading or building for someone else so up or down doesn't apply , just when needed. Memory has always been expensive for what you get in my book , look at a motherboard and all the components and then a piddling little memory stick for comparison , doesn't compute to the eye. If anything it's the price of graphic cards that really bugs me , you can build a complete reasonably adept PC for the price of a supposed middling graphics card or even a second hand car. Mind boggles.
Posted by ipsusu - Thu 24 Dec 2020 15:49
I wonder how DDR5 is going to affect all this. Feels like it was yesterday when we changed to DDR3!

SSD prices coming down always nice. I did buy a 2TB 7200RPM HDD the other day though. Still good enough for my Xbox GamePass back catalog!