Spending large sums on a new PC typically requires lots of consideration, and you might argue that now isn't an opportune time to splash the cash. There's no shortage of uncertainty given everything that is happening in the world, and on top of that, we also know that next-generation graphics hardware is lurking and almost certain to land before the holiday season.

What to do if you really need a new PC right now. Well, renewed competition on both the CPU and GPU fronts is such that there's good value to be had in the mid-range stack, and if you do invest, the latest chipsets offer peace of mind with regards to upgradability. A combination that we've often thought ticks a lot of the right boxes is AMD Ryzen 7 3700X and Radeon RX 5700 XT graphics, and we're not alone in that train of thought as AWD-IT has sent in a review system along those lines. 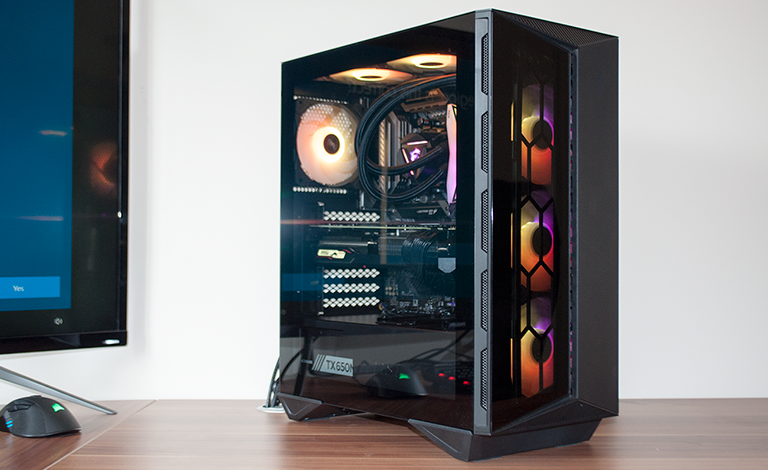 Dubbed the AWD-IT Gungnir 110R and priced at £1,445.98, this mid-tower base unit targets high-quality QHD gaming credentials and has been created with MSI as a key collaborator. Said partnership results in the use of MSI's MPG Gungnir 110 chassis, MAG B550 Tomahawk motherboard, MAG CoreLiquid 360R CPU cooler and Radeon RX 5700 XT Gaming X graphics card.

We've no major quibbles on each of those fronts. The chassis' gamer-orientated fascia is an acquired taste, but if you don't mind that gaudy frontage there's USB 3.2 Gen 2 Type-C connectivity alongside the usual duo of USB 3.2 Gen 1 Type-A, and the tempered glass side panel does a fine job of showing off the innards. MSI's B550 Tomahawk similarly ticks most of the right boxes, and though the board doesn't offer onboard WiFi, it boasts both 2.5G and 1G Ethernet, while the AMD chipset touts forward-looking PCIe Gen 4. If there's a point of contention it's that the premium 360mm liquid cooler could be deemed excessive for the 65W chip at the helm. 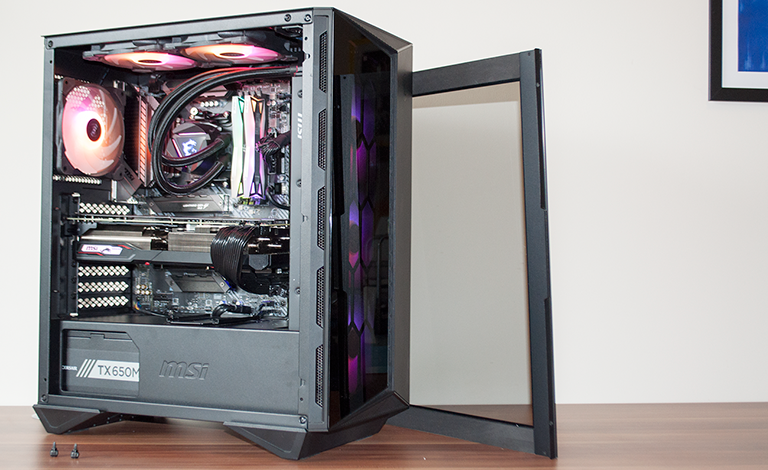 Ryzen 7 3700X doesn't require such bold cooling, yet it remains one of the prime picks in AMD's latest-generation stable. Eight cores and 16 threads in a 65W envelope is tasty, though the reduced power requirement is reflected in a more leisurely peak frequency of 4.4GHz. This is the chip we'd likely choose when building around the new mainstream B550 platform, and AWD-IT does the right thing in pairing said CPU with 16GB (2x8GB) of nippy Adata XPG Spectrix DDR4-3600 memory.

Radeon RX 5700 XT graphics are certain to bode well for the rig's QHD gaming ambitions - MSI's Gaming X implementation is better than most - and storage takes a two-pronged approach in the form of a 512GB Adata XPG SX8200 Pro M.2 SSD as the primary device, alongside a 2TB Seagate Barracuda for secondary storage duties. Interesting to note that AWD-IT didn't feel the need to include PCIe Gen 4 storage as standard, but there's always the option to upgrade to a super-fast SSD if need be. 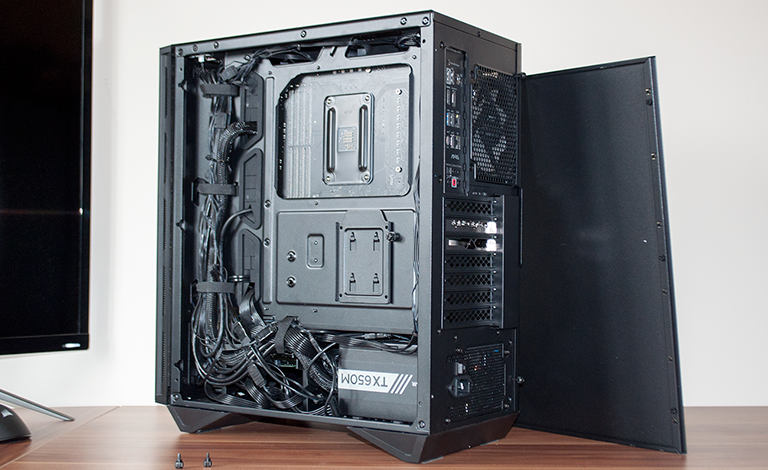 This is a competent build rounded out with a 650W Corsair TX-Series power supply, and though cable management could be better, there's zero bloatware atop the Windows 10 operating system, and the whole package is backed by a three-year warranty as standard. All good so far, however there is a question mark hanging over the price tag. Having browsed the virtual shelves of various retailers, we reckon it is possible to put together a similar system for around £50 less, and if you're willing to downgrade to a less feature-packed motherboard and smaller cooler, you might shave another hundred quid off the asking.

Pricing is paramount at this end of the market, and those who appreciate a good deal may recently have heard about another AWD-IT system, the P300 Air Ryzen. Said PC isn't imbued with lots of MSI gear or elaborate liquid cooling, but can be configured with most of the same core components - including Ryzen 7 3700X processor, 16GB of DDR4-3600, 512GB SSD and Radeon RX 5700 XT Anniversary Edition graphics - for less than £1,100. That's a steal, so read on if you're intrigued to see how the Ryzen 3700X and Radeon 5700 XT combination fares in our latest benchmark suite.