The fact that Intel's best-ever mainstream processor has been met with lukewarm reception is testament to the shock waves that AMD Ryzen has sent through the industry. A 10-core chip just isn't that groundbreaking these days, particularly one built on an ageing 14nm process, but none of that detracts from the indisputable truth that 10th Gen Core i9-10900K carries the crown of world's best gaming processor. 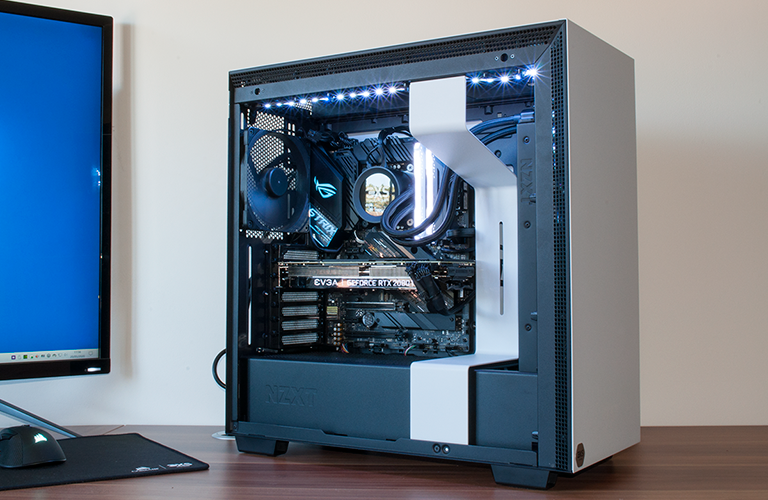 Priced at £3,300, this here rig champions the best that PC gaming has to offer in mid-2020, and to Scan's credit, it does so with just the right amount of style and flair. The use of an NZXT H710 chassis is a fine fit for a sleek, modern build, and with the case available in a choice of colours, Scan offers the base unit in either black or white (pictured). Our white review unit looks particularly classy, and goes to show that while RGB lighting can be pretty, something as simple as white accents on a dark build can be equally effective, if not more so.

It is a handsome build, and given the goal of achieving gaming supremacy, Scan's component selections speak for themselves. At the helm is the new 10-core, 20-thread, 125W Core i9-10900K. Said chip is cooled by an eye-catching 360mm NZXT Z73 all-in-one liquid cooler and paired with 32GB (2x16GB) of Corsair Vengeance RGB Pro DDR4-3000 memory atop an Asus ROG Strix Z490-F Gaming motherboard.

Enough storage for all (most?) of your game library is provided by a 2TB Samsung 970 Evo Plus M.2 SSD, and as is to be expected on a build of this ilk, a GeForce RTX 2080 Ti provides the graphics muscle. The card in question is an EVGA Black Edition carrying 11GB of memory, and Scan sees fit to overclock GPU boost frequency by 13 percent from 1,545MHz to 1,745MHz, while memory climbs to an effective 14.6Gbps. The only snag is that at the time of shipping, Scan's engineers were unable to get EVGA's PrecisionX software to remember the overclock between reboots; we were forced to manually apply the settings, though we expect this issue to be resolved before systems begin shipping to end users. 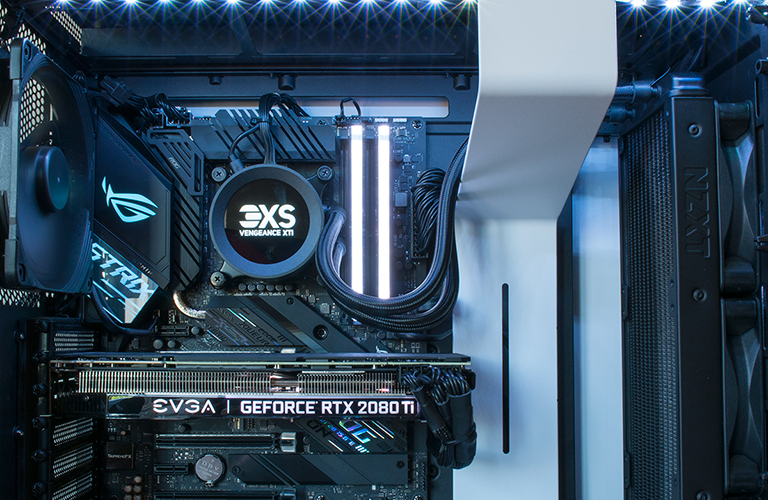 Speaking of overclocking, is it worth pushing the 10900K beyond the default specification? That's debatable given the chip's out-the-box ability to hit 5.3GHz on up to two cores in the right conditions, and as we get accustomed to many-core CPUs, the value of an all-core overclock is being diminished. On these processors, multi-threaded performance may go up, but more often than not light-load performance will be reduced.

Scan is acutely aware of that fact, so while it ships the Vengeance XTi at 5GHz across all cores with 1.33V, a secondary BIOS profile is pre-configured to stock frequencies, for users who favour the higher boost speed and lower power consumption. We'd be inclined to run stock; however we like the fact that Scan has considered both scenarios, and of course the overclocks on both CPU and GPU are backed for the duration of the three-year warranty.

Elsewhere, power is supplied by an 850W Corsair RMx unit offering enough headroom for future upgrades, and external connectivity is suitably versatile. The front of the chassis is home to a USB 3.1 Gen 2 Type-C port, alongside two USB 3.1 Gen Type-A, and around back the motherboard offers Intel 2.5GbE Ethernet as well as a further eight USB, including three USB 3.2 Gen 2 Type-A and another USB 3.2 Gen 2 Type-C. All that's missing is built-in WiFi, though a bunch of wireless adapters are listed on Scan's configuration page. The available options are plentiful, and there are a couple of ways of quickly bringing down the price. Though the NZXT cooler looks pretty, switching to a 360mm Corsair H150i RGB Pro XT would shave almost £100 off the asking, and if you don't need so much super-fast storage, switching to a 1TB drive from Intel knocks off another £300. 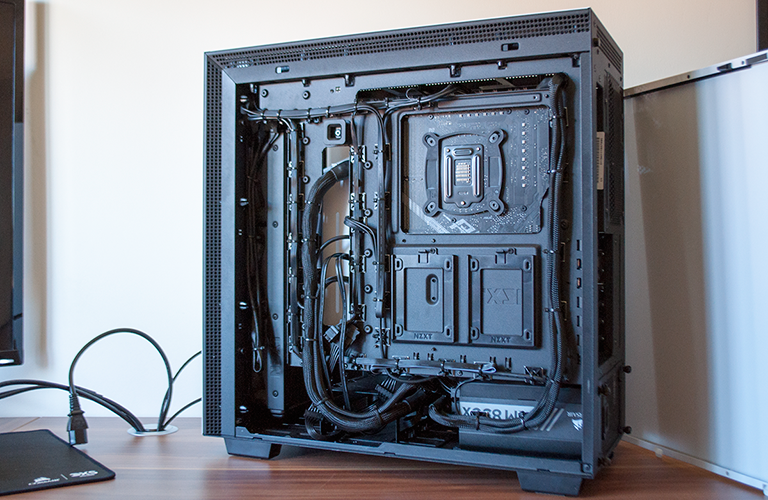 The peace of mind of three-year cover from a reputable UK firm is one good reason not to build the rig yourself, and there's another in that Scan's £3,300 asking fee is very competitive; browsing the shelves of various retailers, we reckon it would set you back somewhere in the region of £3,500 to acquire all of the aforementioned components yourself, including the Windows 10 operating system.

Scan's really gone to town with the cable ties - everything is snug around back - and we appreciate the little extra details spotted around the system. The chassis' default rear exhaust, for example, was deemed too noisy and swapped for a 140mm Noctua, and the NZXT cooler's silent profile is adjusted to react to liquid temperature as opposed to CPU, lessening the fluctuation in fan speeds for a smoother overall noise profile. The '3XS Vengeance XTi' gif on the NZXT cooler is a nice touch, too, and Scan's order process is a cut above most competitors; you get photos of your PC being built, and each system comes with a welcome pack that includes a USB recovery stick loaded with a backup of the operating system and a handful of useful diagnostic utilities.