The arrival of SSDs has been a boon for high-speed external storage. Though smaller in capacity than price-equivalent mechanical drives, recent advances have brought multi-terabyte solid-state to the fore. The latest iterations use the NVMe host controller specification for supremely fast speeds, helped on by bridging over to Type-C USB 3.2 Gen 2 (10Gbps) or, at the very high end, Thunderbolt 3 (40Gbps). Cutting-edge drives such as the WD My Passport SSD are able to read and write large files at up to 1GB/s, meaning a whopping 1TB of data - for even the biggest projects - can be moved in little more than 15 minutes.

Though eminently fast, these drives have little in the way of rock-solid security and toughness. Makes sense as sequential speed is paramount for creators requiring a relatively inexpensive storage medium for non-critical files. Yet there exists a market for those looking for super-secure, ruggerdised devices that still offer tasty GB/s transfers. It's to this field that storage specialist G-Technology releases the ArmorLock 2TB drive featuring app-based high-grade 256-bit AES-XTS hardware encryption based on an open-source core cryptography library known as Sweet B.

The premise is that certain industries will pay handsomely for super-fast storage with easy-to-use security and manageability. Think of the movie world, where shifting 1-2TB of production footage between sites, to a few authorised people, is a necessity rather than luxury. Or creative industries sending sensitive, multi-GB files to clients. 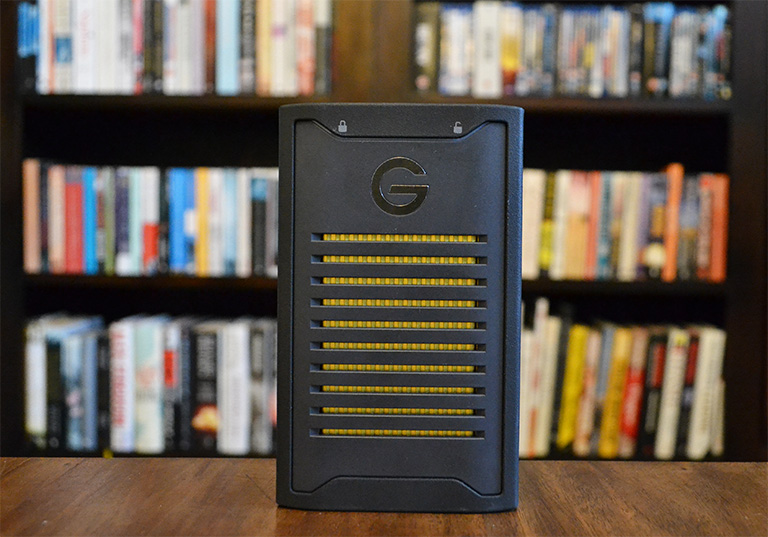 Back on point, the G-Technology ArmorLock NVME SSD measures 133mm x 80mm x 18mm and weighs 197g. That's comfortably larger and significantly heavier than the consumer WD My Passport SSD but remains just about pocketable, as evidenced by its relative size. You can also think of it as similar to a modern smartphone in width and breadth albeit with twice the thickness.

The clear reason for its form factor is the ruggerdised plastic casing which takes overt design cues from the firm's G-Mobile (Pro) SSD solutions. To that end, there's an IP67 rating translating to protection against dust ingress and immersion in water less than 1m deep. It will also withstand a 3m drop on to carpet and is rated as being crushproof to 450kg. 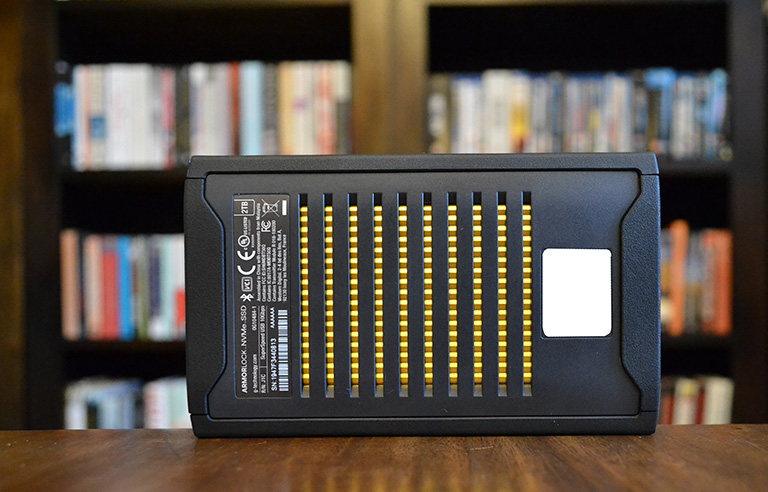 Putting those merits to the test, I dropped the drive down the stairs, put it in a bowl of lukewarm water, and then stood on the casing for good measure. Passing these basic rugged tests gives users confidence that the drive shouldn't fail when being potentially knocked around in transit from site to site.

Inside, the NVMe-based SSD is surrounded by an aluminium core which acts as a giant heatsink. The hottest part of the drive's enclosure was reported as hitting 48°C during a torture test, which is lower than what most heatsink-laden internal M.2 drives achieve within systems.

Backed by a five-year warranty and available in solely a 2TB capacity at the outset priced at £559, G-Technology wouldn't be drawn on which actual NVMe drive resides within, though it would be reasonable to assume it is from WD's SN stable, as per the dearer G-Drive Mobile Pro SSD. 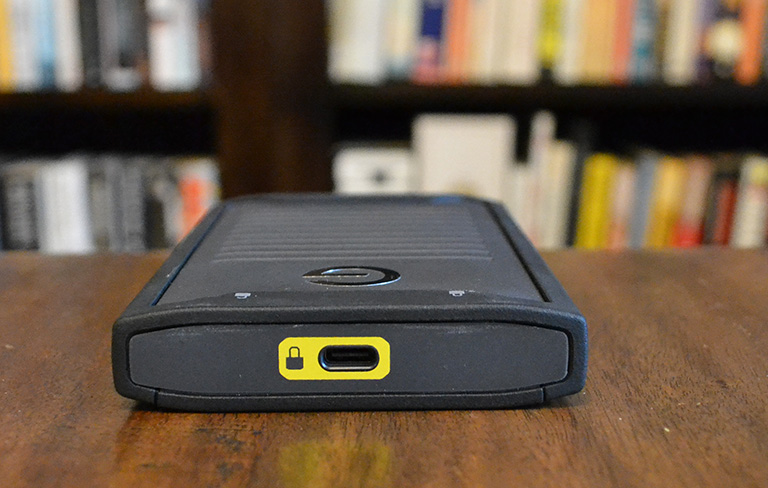 Absolute transfer speeds are the realm of the Mobile Pro equipped with a Thunderbolt 3 interface, but the ArmorLock is no slouch. Making full use of the 10Gbps interface afforded by USB 3.2 Gen 2, sequential transfers are quoted as 1,000MB/s read and write. In a best-case scenario of moving huge files from a suitably speedy server, it'll take around 30 minutes to either fill or transfer the entire contents. The package includes a 30cm Type-C to Type-C cable and a similar length Type-C to Type-A for computers with older ports.

By default, the drive is locked when connected to any computer, shown by an orange LED underneath the padlock sign. This changes to white, by the appropriate sign, when unlocked. And it's here that the ArmorLock security platform comes into play.

The drive can be unlocked via an app at the outset. The iOS and macOS versions are available today and Android will follow shortly. The entire process is simple: install the app, scan the QR code on the back of the drive (blanked out here), let the app communicate with the SSD via Bluetooth, and away you go. Being app-based enables multiple users to have access to the drive, though it needs to be in their physical location - within Bluetooth distance of their phone - for it to work.

Once connected, you're offered the choice of one of three popular file systems, ability to add users via a dedicated email or messaging link and consequent scanning of the drive's QR code on their phones, have multiple drives connected to one account, and a nifty location-tracking tool that uses your phone's GPS to determine where it (and the drive) were the last time it was unlocked. Handy if you're on the road plenty and need a way of determining when you last used it.

The security aspect can be considered two-fold. The drive has an always-on 256-bit Advanced Encryption Standard (AES) hardware-based encryption using the XTS block cipher mode. And because it's built into the controller silicon, taking the heavy load, G-Technology says there is minimal impact to performance, which we'll prove in the benchmark section. On the app/phone side, the communication takes place over a secure transport cryptographic protocol which the drive uses to validate a phone-side certificate generated on first use. Nothing related to security, therefore, is stored on the host computer.

This handshaking and validation happens in the background; users simply press the unlock button and, depending upon the host computer, the drive is unlocked in 2-5 seconds. It remains unlocked until it's either removed or the computer rebooted, by which time a further unlock is required. The always-on nature of device-side encryption means that it cannot be used as a plug-and-play solution, though quite why you would want to is another matter.

It is inevitable that the ArmorLock technology will find its way into other G-Technology storage products and, should it be deemed successful, into general technology security and unlocking. It takes away the need to remember passwords, has the benefit of being extended out to other users easily and securely, and offers penalty-free performance to boot.