AMD has pushed forward the adoption of super-fast storage by enabling PCIe 4.0 on X570 and B550 chipsets. Offering close to 8GB/s bandwidth from a x4 interface common on motherboards featuring M.2 slots, leading-edge drives oftentimes hit 5GB/s on sequential reads and writes. Marketing them is easy when you compare that with the 2-3GB/s for PCIe 3.0 SSDs.

Even so, the market for PCIe 3.0 drives is much larger because they're typically cheaper and far more abundant than their PCIe 4.0 cousins. It's now difficult to entertain any mid-range PC without an SSD because 250GB models start at £40 and are usually augmented by a larger spinning disk even when overall budget is tight.

Helping to increase the popularity of NVMe SSDs is Kioxia. Never heard of 'em? You're in good company, but this apparent startup is actually the new name for Toshiba memory. Why Kioxia, you might ask? It's a portmanteau of two words: kioku (Japanese) and axia (Greek) meaning memory and value, respectively. Memlue doesn't quite have the same ring to it, right?

Linguistics aside, Kioxia splits the consumer NVMe drives into the enthusiast Exceria Plus and mainstream Exceria families. Both use a PCIe 3.0 x4 interface and NVMe 1.3c protocol but, as the positioning suggests, differ in performance, capacity and price. We're taking a closer look at the Exceria 1TB model today.

It's the largest of the trio that features Toshiba's quad-channel TC58NC1202GST controller allied to 96-layer flash memory. Aligned vertically in the '3D' stacking popular of late, it's relatively easy for Toshiba to shoehorn up to 2TB (Exceria Plus) to a standard 2280 M.2 drive, so it's a shame not to see it represented in the mainstream segment. It's no surprise this arrangement is also present on the Toshiba-branded RC500, which is effectively the same drive. Memory chips and controller are all contained on the top side, while the reasonably large Kioxia branding sticker does the cooling no favours.

Buffering operations on the largest-capacity model is Samsung DDR4 memory (K4A8G165WC-BCTD), and the ensemble combines to offer a peak 1.7GB/s read and 1.6GB/s write along with solid IOPs. These numbers are consistent with NVMe drives that put value before outright performance - the Exceria Plus, meanwhile, almost doubles potential performance on both sequential and random workloads.

There are no further revelations for warranty, power consumption, or endurance. 400TBW constitutes about 200GB of writes per day, every day, for the five-year warranty. There's no mention of hardware encryption, which seems a strange omission even on a value SSD. 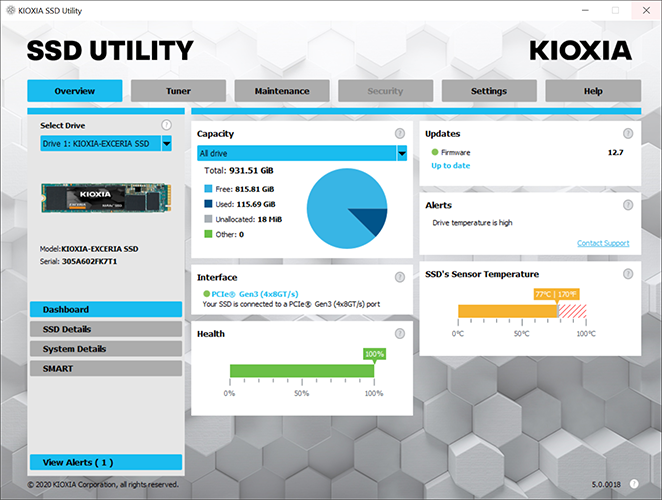 An accompanying utility provides information on health, capacity and a simple benchmark tool. What's interesting is that, without any additional heatsinks, the SSD sensor temperature quickly escalates to around 80°C under only a few minutes' load, leading to alerts if the application is running. However, even after a couple of minutes of idling the temperature is only reckoned to have dropped by 2°C, which doesn't seem right. It's an area where novice users may become nervous without good reason.

Recommended pricing has been reduced to £105 for the 1TB drive, though it is difficult to find in-stock anywhere. This new figure is consistent with the entry-level models from competitors. One question on enthusiasts' lips is how does an entry-level offering compare with a premium PCIe 4.0 drive when both are benchmarked on an AMD Ryzen 3rd Gen platform. Let's find out.