Amid the fear and uncertainty of the global pandemic, there is also opportunity in the world of tech. Manufacturers are fully aware of a shift in working habits, and in the storage world, NAS manufacturers are keen to point out the virtues of a safe, secure and multi-device data repository for the home office.

We've historically looked upon NAS as a favourable solution - the right box can bring much more than just centralised storage to the modern workplace - and if you're making provisions for a long-term home office, Synology reckons the new DS220+ is the ideal starting point. 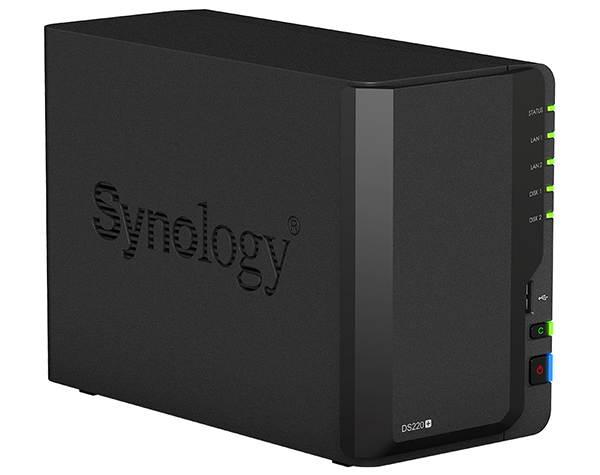 Arriving at retail at around the £330 mark, the firm's latest unit supplements the existing four-bay DS920+ as an affordable alternative in scenarios where two bays will suffice. Given that the latest NAS-specific hard drives now weigh in at 18TB apiece, there's good reason to suggest that a dual-bay NAS is ample for most home users.

Pricing is similar to the three-year-old DS218+ that it replaces, and the two look almost identical, with Synology retaining the same 165mm x 108mm x 232mm chassis and 60W external power supply. It's a tidy-looking piece of kit, however given the gap between generations, it is frustrating to find that Synology's hardware upgrades continue to arrive at a glacial pace. In a nutshell, the dual-core processor has been upgraded to an Intel Celeron J4025 boasting a higher 2.9GHz boost frequency, and the 2GB of accompanying memory has made the transition from DDR3 to faster DDR4. Incremental upgrades, though do be aware the 2GB of onboard memory is soldered, with only a single SO-DIMM slot available for expansion.

There's not a great amount of forward progress in the I/O department, either. We like that Synology continues to include a front USB 3.0 port alongside a one-click copy button, but the changes around back are unexpected and unusual. Gone is the DS218+'s eSATA port - meaning the DS220+ can't be paired with a five-bay DX517 expansion unit - and in its place is a secondary Gigabit Ethernet. Granted, if you have a compatible managed switch the ability to team the two Ethernet ports is welcome, but we'd have preferred Synology to have kept eSATA alongside a single, forward-looking 2.5GbE port.

The lack of PCIe expansion makes it impossible to upgrade the network interface at a later date, and it is worth pointing out that competitors such as Qnap now include 2.5GbE as standard on rival NAS solutions. Elsewhere, the two drive bays, revealed by pulling away the magnetic front cover, are tool-free and easy to use, albeit without security locks, and around back a single fan keeps the whole unit cool. Want a little more in terms of hardware from a two-bay Synology NAS? Then you'll need to stump up a further £100 for the DS720+, which retains eSATA, adds two M.2 NVMe caching slots and a quad-core processor, but still doesn't support 2.5GbE networking. 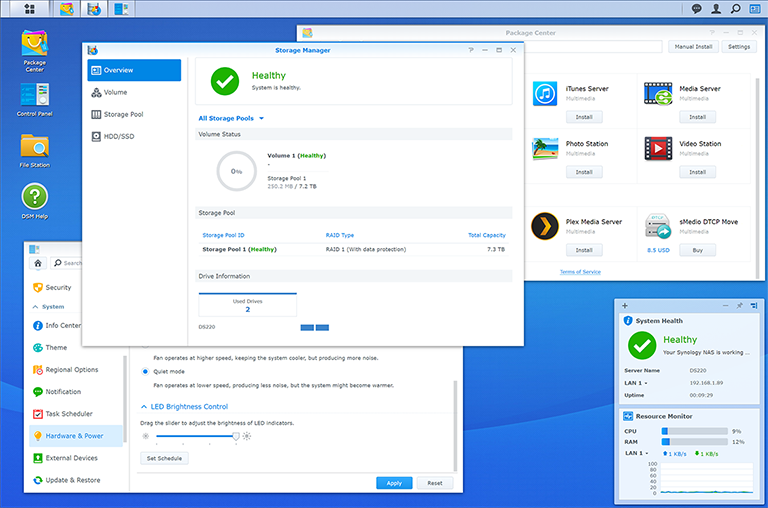 As a purported leader in the field, you may wonder why Synology has decided to play it safe with regards to hardware. The answer, we presume, is that the manufacturer is relying heavily on the pull of its admittedly excellent DiskStation Manager operating system. Offering a level of polish that's a cut or two above most competitors, DSM is Synology's star attraction and touts a feature-set that's both comprehensive and accessible to every type of user.

Everything from backups to media servers is handled elegantly, Synology's mobile apps are equally comprehensive, and with an Intel processor under the hood, the DS220+ can tackle the likes of Plex media transcoding or Docker virtualisation. We have no hesitation in stating that DiskStation Manager is one of, if not the most accomplished operating systems currently available on a turnkey NAS. Want to judge for yourself? Try out the live DSM demo at demo.synology.com before moving on to the benchmarks.