Lenovo has been well positioned to benefit from the boom in PC gaming. Having kickstarted its Legion line of hardware in 2017, the Chinese firm has gone on to introduce an entire catalogue of gear designed to suit every type of gamer. We've been impressed with recent Legion laptops and today we're exploring Lenovo's monitor ambitions with a closer look at the Legion Y25-25.

Designed to disrupt the status quo, the Y25-25's mass-market appeal is derived through one simple fact; it offers a 240Hz IPS panel for £299. That alone is a key attraction, as few others offer this particular combination at such an aggressive price point, and Lenovo certainly knows how to catch the attention of the pro-gaming crowd. 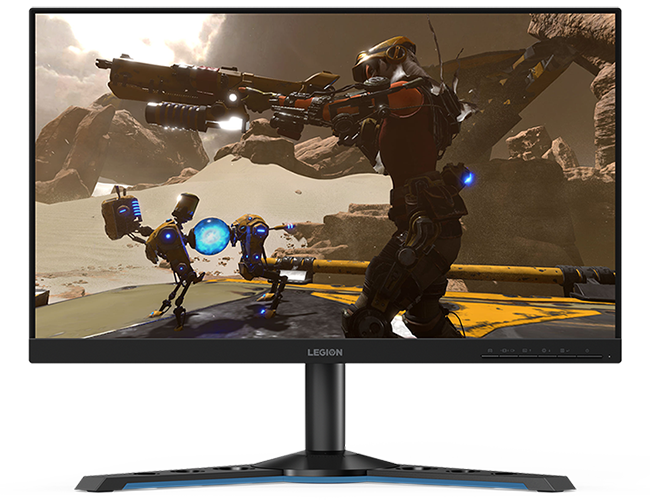 Outside of that headline 240Hz figure, the 24.5in IPS panel can be deemed modest in most regards. A 1,920x1,080 full-HD resolution is routine at this screen size, brightness of up to 400-nits is the minimum requirement for entry-level DisplayHDR 400 certification, a basic contrast ratio of 1,000:1 is a hallmark of IPS tech, and though the manufacturer officially quotes a 1ms response time, the Y25-25 doesn't feel quite as nippy as TN-based competitors.

We've also gotten so accustomed to testing larger monitors that the 24.5in Lenovo feels noticeably small by comparison. These are obvious limitations, yet for the target audience they tend to pale into insignificance when you fire up a game. FreeSync support in the 48-240Hz range keeps everything silky smooth, and when you become acquainted with 240Hz gameplay, even 144Hz can feel like a significant downgrade; heck, going back to 60Hz is bordering on unplayable.

On the whole, Lenovo succeeds in its goal to bring ultra-fast IPS gaming to the sub-£300 arena, but as you'd expect at this price point there are inevitable limitations. Competitive gamers seeking the lowest possible response time will suffer from inverse ghosting with overdrive set to extreme - in our experience the panel works best using the out-the-box 'normal' mode - and the HDR experience is so primitive it is best left disabled.

A lack of searing brightness or localised dimming shouldn't be a problem if 1080p SDR at 240Hz is high on your list of priorities, and Nvidia users will be pleased to hear that the Y25-25 is already certified as G-Sync Compatible, ensuring adaptive framerate synchronisation on either compatible GeForce or Radeon hardware.

Continuing the focus on essentials, Lenovo's presentation is tidy with few frills. The blue trim on the needlessly large base doesn't do anything for us but is inoffensive, there's no unnecessary RGB lighting for the sake of, and black borders above and to the sides of the panel are slim enough to lend a modern appearance. Better yet, the VESA-compliant stand offers decent versatility through 130mm of height adjustment, 30° swivel, -5°/+30° tilt and the ability to pivot into portrait mode.

Around back you'll find the power connector, one HDMI 2.0, one DisplayPort 1.2 and a 3.5mm headphone jack. There aren't any integrated speakers to speak of, yet there is a four-port USB Type-A hub and, usefully, two of those USB ports and the headphone jack are located on the monitor's left side where you'll also find a pop-out headphone holder. 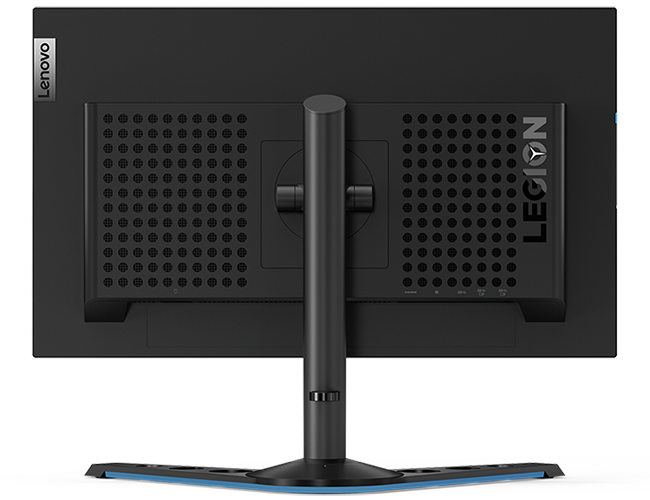 Fancy joystick controls aren't available, with Lenovo sticking to a standard row of six tactile buttons, and though the simple-looking OSD isn't the quickest to navigate, a perfunctory Display Control Center app lets users toy with basic settings and various gaming enhancements such as crosshairs and timers from within Windows.

One final note before we get to the benchmarks, and an ongoing criticism of Lenovo's UK online store, is that the sparse official product page doesn't lend a favourable first impression. Not only is the Y25-25 £40 more expensive when buying direct from Lenovo, it is also advertised as a G-Sync panel, when it is in fact a FreeSync solution with G-Sync Compatibility.