You are here:
Monitors Hardware Reviews

There are many ways to go when choosing a high-end gaming monitor. Some favour the fastest possible refresh rate, you might prefer the immersion of a curve, others prioritise resolution, and there will always be those who put sheer size at the top of their list of requirements. If you're of the opinion that bigger is better, take a gander at the new Philips Momentum 558M1RY.

Priced at £1,200 and tasked with taking console gaming to the next level, this giant 55in monitor is the biggest we've ever tested, and by some margin. Heck, it's bigger than any TV I have at home, which is testament to how far gaming monitors have come. 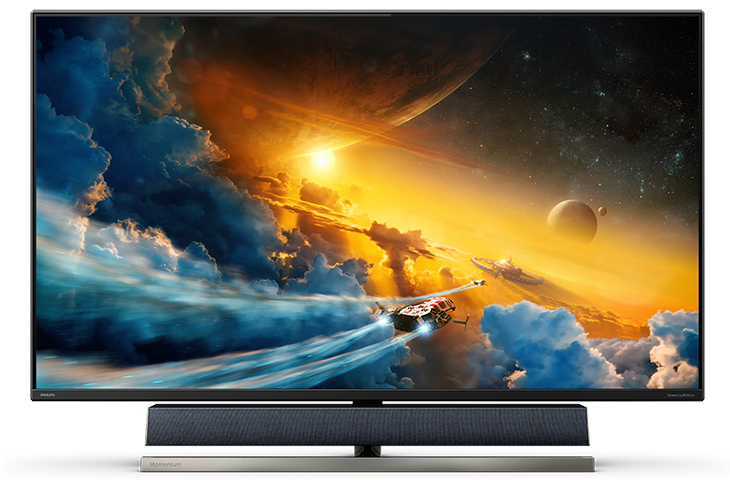 Before we get to the nitty gritty, let's revisit the debate between TV and monitor. Traditionally speaking, the TV commanded the living room through large screens with integrated tuners and all manner of image processing intended to make movies and shows appear as lifelike as possible. In contrast, monitors were typically smaller affairs, designed for up-close clarity and fast gaming with minimal input lag.

That was then, but we're now starting to see plenty of convergence between the two. Current TVs tout features typically associated with monitors - adaptive framerate synchronisation being a good example - and today's largest monitors are clearly designed to blend effortlessly into the living room, which brings us neatly back to the Philips.

Designed for the Living Room

Despite being the largest monitor to pass through the labs, the Momentum 558M1RY is also one of the more stylish, thanks to slim bezels on the top and sides, a pre-attached metal stand that provides a high-quality look and feel, and a fabric-covered Bowers & Wilkins soundbar that emphasises the unit's TV-like credentials. All that's missing is an integrated tuner, though you might argue that modern viewing habits have shifted toward streaming to such an extent that support for traditional over-the-air broadcasts is becoming less of a concern.

It is a tidy piece of kit and the thin frame helps prevent it appearing overly chunky - indeed, dimensions of 1,232mm x 834mm x 308mm make this 55in screen no wider than my ageing 50in Pioneer TV. That isn't to say it's easy to handle, mind. We'd recommend at least two people when removing the 27kg unit from the box, and the size does pose some usability quirks. Good luck reaching the USB ports around back, and though there's a joystick for controlling the GUI on the rear bottom-right corner, that too isn't exactly within reach so you'll be thankful for Philips' bundled IR remote control.

As a gaming solution first and foremost, the specification sheet sounds rather tasty. Philips' VA panel touts a 3,840x2,160 4K UHD resolution and a fast 120Hz refresh rate with FreeSync Premium synchronisation in the 48-120Hz range. Silky action is ensured, with G-Sync compatibility also confirmed, and though the 4ms grey-to-grey response time isn't the quickest, you do get the benefits of DisplayHDR 1000 certification. We're promised a 750-nit brightness (1,200 nits in HDR), a 4,000:1 contrast ratio, 144 local dimming zones and 95 per cent DCI-P3 colour coverage.

Such criteria bode well for high-resolution HDR gaming, but as you might expect, regular desktop use isn't ideal. Besides being too big to comfortably sit up close, the panel shares some of the undesirable characteristics of its 43in predecessor. These include a BGR (blue, green, red) subpixel layout that results in a checkerboard effect and frayed text on the Windows desktop, a mild halo when light items are placed on a dark background, and viewing angles that aren't the most forgiving. Though Philips quotes a viewing angle of 178°, we find that vibrancy is lost when viewed from either side, and you ideally need to sit directly in front of the panel to enjoy it at its best.

The 558M1RY is marketed primarily as a game console companion. Hooked up to an Xbox One S, the screen is recognised as both 4K, HDR10 and VRR (variable refresh rate) compatible, and Philips' HDR implementation is one of the better examples of the tech on an LCD monitor. It is a feature well worth having and brings an extra dimension to supported games, though switching between HDR and SDR modes is surprisingly slow. The delay can be frustrating when playing a HDR game as exiting back to the SDR home screen means you have to wait a few seconds for the image to reappear.

4K games and movies inevitably look impressive, however the potential input lag advantage over a traditional TV is only likely to be noticed by enthusiast gamers. The difference between the monitor and a decent TV on game mode is imperceptible to our eye, though we did pick up on a few other imperfections. Firstly, there's the matter of motion blur, which we found evident even when sitting at a distance. This can be reduced by cranking overdrive up to the fastest available setting at the expense of some overshoot, however there's no instant remedy for the connectivity options, which prevent the panel from realising its full potential.

Lining the back the screen, Philips has a four-port USB 3.0 hub, a headphone jack, one DisplayPort 1.4 and a trio of HDMI 2.0. Connect a PC via DisplayPort and you can manage 4K120 HDR through a combination of 8-bit colour and dithering, but connect a games console via HDMI and you're limited to 4K60 or 1440p120. A shame, really, as next-generation consoles are edging near, and HDMI 2.1 support would have made the 558M1RY a more future proof solution, with full compatibility for 4K120 on PlayStation 5 or Xbox Series X. 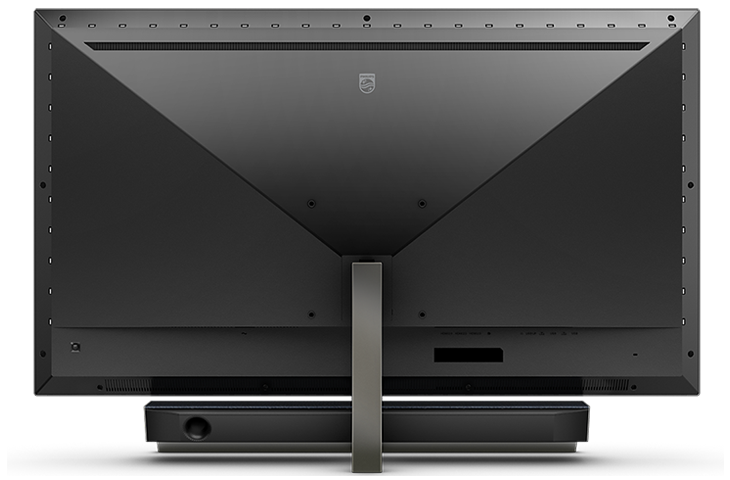 As it stands, the current iteration feels more like a proof of concept, a demonstration to highlight how a giant-sized monitor might fit into the living room. With that placement in mind, Philips includes Ambiglow lighting across the top and sides. This can be set to a fixed colour or matched to on-screen content (or disabled entirely), yet while it adds an extra feeling of immersion, the lighting doesn't appear as responsive as the Ambilight tech featured in Philips TVs.

Where the 558M1RY succeeds in mimicking a high-end TV is the Bowers & Wilkins 2.1 DTS soundbar, which incorporates a pair of tweeters, two 10W mid-range speakers and a 20W subwoofer. Sound quality easily beats any monitor we've experienced, with clear dialogue, clarity at higher volumes, good depth and a reasonably wide soundstage. The soundbar is a highlight, yet you can't help but wonder, at this price point wouldn't you just buy a Philips OLED TV instead? We suspect most would, but lets run the benchmarks before coming to a conclusion.