There's a new Nvidia G-Sync Ultimate monitor in town. It goes by the name of AOC Agon AG353UCG and is heading to retail shelves priced at a staggering £2,000. Does the product name ring a bell? That's because AOC first revealed this monitor almost 12 months ago, leaving many enthusiasts to ponder whether or not a retail release would ever actually happen.

Well, the monitor's officially on its way - though don't rule out a further delay given what's happening in the world - and the question mark that ought now be on enthusiasts' lips is has AOC used the extra development time to iron out the wrinkles that have plagued other G-Sync Ultimate solutions? To date, we've reviewed the Acer Predator X27 and Asus ROG Swift PG35VQ, both of which wowed in some areas while falling short in others, so can the Agon AG353UCG go one better? 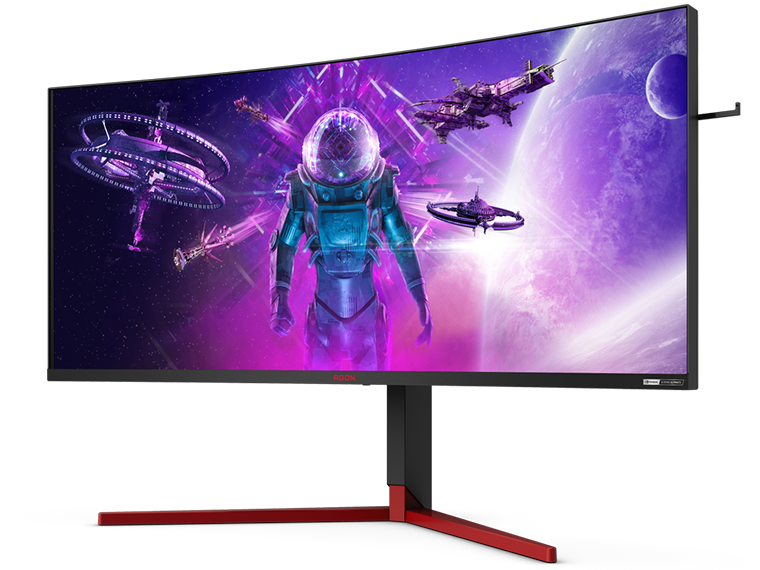 As we know, AOC's 35in ultrawide format shares plenty in common with the aforementioned Asus ROG Swift, and that means many of the same sought-after attributes. The moderately curved (1800R), matte VA panel offers a 3,440x1,440 UWQHD resolution, a quoted 2ms grey-to-grey response time and a lavish refresh rate of up to 200Hz. Silky-smooth gameplay is the order of the day, and with G-Sync Ultimate support there's the promise of a top-notch tear-free experience for GeForce gamers, as well as certification for the higher-end DisplayHDR 1000 standard.

Peak luminance is therefore quoted at an eye-popping 1,000 nits (500 nits typical), and as expected AOC employs a Quantum Dot-enhanced FALD (Full Array Local Dimming) backlight with 512 independent zones. Add to that 90 per cent DCI-P3 colour coverage and a static contrast ratio of 2,500:1 and you have a high-end feature set that few gaming monitors can match.

At this price point attention needs to be paid to the monitor's external presentation and ergonomics, and though the stand's red base is likely to prove divisive, I'm surprised to say I personally quite like it. The shade of red is dark and deep, so as not to be too distracting, though the other red element - an Agon logo on the bottom bezel - could have been more subtle. Dimensions of 543mm x 833mm x 276mm require a good-sized desk, yet from the front the AG353UCG is a sleek-looking piece of kit, with slim bezels on the top and sides.

Despite offering little in the way of cable management, the supplied stand does offer decent versatility. You get 120mm height adjustment, -5º/+20º tilt and 32º swivel, plus a built-in carry handle that comes in handy. The stand clips into place effortlessly, with just a single screw used to tighten the base, and if you choose not to use it there's a widely compatible 100mm VESA mount. Do be aware that the monitor as a whole weighs the best part of 14kg, so choose third-party mounting solutions carefully. 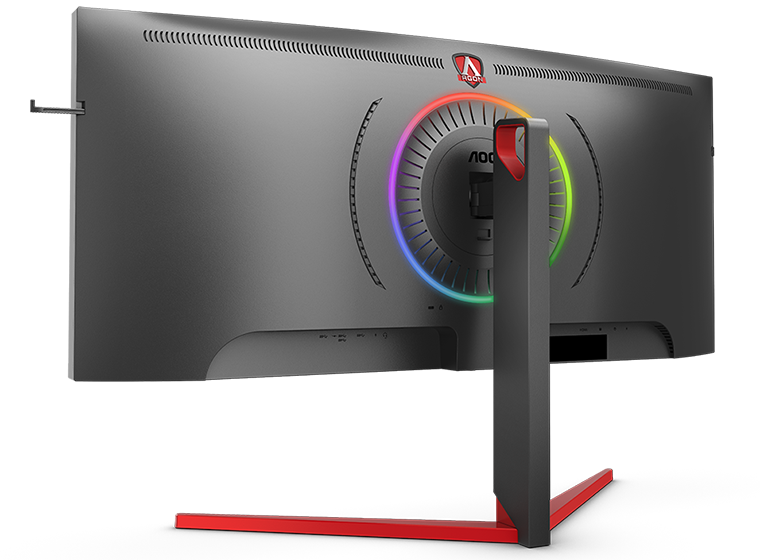 The use of this type of stand on a screen of this size does result in some unwanted wobble, but presentation is for the most part clean and not overly ostentatious. We're impressed by the integrated DTS stereo speakers, which deliver a decent punch if you'd prefer not to use an external solution, though the ring of RGB lights on the back feels entirely superfluous. You barely notice the rear illumination is there, and though the lighting ring is easily turned off, we haven't yet found a way of disabling the red beam that distractingly fires downward either side of the joystick positioned centrally on the monitor's bottom edge.

While the joystick works perfectly well, AOC also includes a wired puck-shaped remote for quick access to menus and presets. The remote is a useful addition, though it's a shame the AG353UCG doesn't have a comprehensive desktop app for customisation via keyboard and mouse. Elsewhere, pop-out headset holders are present on both sides, and in keeping with the rival Asus PG35VQ, I/O ports are relatively sparse. The bottom side is lined with just one HDMI 2.0, a single DisplayPort 1.4, audio line-in, headset and microphone jacks, and a four-port USB 3.1 Gen 1 hub.

Given the similarities, it should come as no surprise to learn that the AG353UCG shares many of the usability traits of the already available PG35VQ, meaning there's plenty to like, along with a handful of annoying niggles. Let's get the annoyances out of the way first, starting with the bothersome internal fan. Yep, as was the case with the other G-Sync Ultimate monitors we've reviewed, the new AOC relies on active cooling to tame the underlying hardware.

Can you hear it? Clearly. Is it a deal-breaker? Depends. For gamers who frequently don a headset, fan noise may prove inconsequential, but for just about everyone else it's a constant distraction placed right in front of your face. It has been a while since I tested the Acer and Asus panels, but I don't recall them being quite this vocal. I appreciate a really quiet working environment, and I doubt I'll get ever used to the noise profile. In fact, it is irritating to the extent that I look forward to turning the monitor off for a few minutes of peace and quiet; but be warned, the fan keeps spinning for almost 15 minutes after shut down.

In my opinion, if you have to push a panel far enough to necessitate a clearly audible cooling solution, you've pushed too far. And the AOC, like the Asus, is right on the bleeding edge, so much so that you can't simply crank-up all the dials. Due to the bandwidth constraints of DisplayPort 1.4, the 180Hz or overclocked 200Hz modes are only available with 8-bit colour, switching to 10-bit HDR limits the refresh rate to 144Hz. Panels persuaded to run at these speeds warrant HDMI 2.1 or DisplayPort 2.0.

Such limitations are more keenly felt when the fee is equivalent to that of a 65in OLED TV, and we've not yet mentioned the large external power brick, nor the proprietary power connector that pops out a little too easily. One trade-off too many? Perhaps, but there's also no escaping the obvious; load up a game and the AG353UCG will, without a doubt, put a smile on your face.

For a VA panel, AOC has done well to minimise black crush and ghosting, to the point that you need to be highly susceptible to such artefacts for it to be considered detrimental to the overall experience. Action at refresh rates of 144Hz and above is superbly smooth, however do be wary of the 'extreme' overdrive setting; it may feel more responsive at the highest speeds, but results in noticeable overshoot.

Rendering games at the native 3,440x1,440 resolution is more forgiving than a 4K UHD panel, and in the right titles the 21:9 aspect ratio can deliver spectacular results. HDR performance is about as good as we've seen on a gaming monitor, despite the fact that in-game implementation continues to leave something to be desired, and AOC includes an option to turn off the variable backlight in SDR mode, helping reduce the unwanted halo effect during regular desktop use at the expense of overall contrast.

Feels like we're retreading familiar ground, but let's run the benchmarks to see exactly how AOC's implementation stacks up.