Monitors have improved to such an extent that attaching a modern display exclusively to a desktop PC almost feels wasteful. Today's screens deserve to be multi-purpose solutions, and we're starting to see manufacturers broaden their horizons when it comes to connectivity and versatility.

We've been impressed by monitors that incorporate USB-C for single-cable laptop docking, and Philips has intrigued with a line of Momentum monitors designed with console gaming in mind. Philips' first such panel, the giant 43in 436M6VBPAB, showed plenty of promise when gaming on console but came up short when used a traditional PC display. Can a smaller, more mainstream alternative do a better job of balancing both use cases? Enter the 32in Philips Momentum 326M6VJRMB. 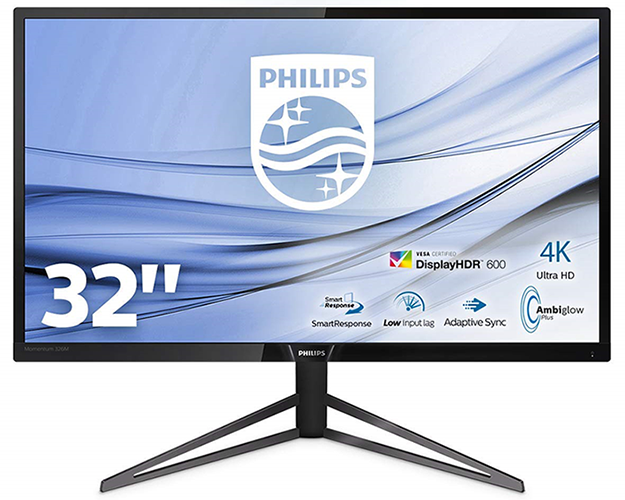 Available at around £490, the 326M6VJRMB (which we'll be referring to as the Momentum 32 from here on in), has the makings of a highly capable all-rounder. As with so many displays of this size, Philips has opted for a 4K MVA panel whose characteristics are well suited in terms of both price and target audience. The 3,840x2,160 resolution works well at this screen size and translates to a better PPI than the larger 43in offering, while the spec sheet appears a fine match for a high-end games console.

Conforming to the DisplayHDR 600 standard, Philips touts 10-bit colour support and peak brightness of up to 600 nits, in addition to FreeSync support in the 40-60Hz range, albeit without low-framerate compensation. The 4ms grey-to-grey response time isn't cutting edge, and neither is the 60Hz maximum refresh rate, yet multimedia content does look stunning at a 4K resolution and for Nvidia gamers we can confirm the panel is recognised as G-Sync Compatible. We noticed little in the way of motion blur or ghosting, and games ultimately feel fast and responsive. A fine match for, say, 4K HDR gaming on an Xbox One X or a next-gen console further down the line, though playing devil's advocate, might PC gamers prefer to trade the high PPI for the silky feel of a lower resolution and higher refresh rate? That's very much a case of personal preference.

During our time with the Momentum 32 we've felt as though Philips has delivered a highly enjoyable all-round experience without pushing the boat out in any one aspect. DisplayHDR 600 certification can be deemed mid-range, yet it ensures decent brightness, good colour coverage and localised dimming. Philips employs 16 edge-lit zones to help amplify the HDR experience, and though it's no match for full-array local dimming, Momentum 32 does a surprisingly decent job of displaying HDR content, with modern games exhibiting a noticeable layer of wow factor. It's also worth pointing out that localised dimming is disabled in SDR mode, resulting in no unwanted halo effect when light elements are placed on dark backgrounds.

As a PC display, the 32in form factor is eminently more user friendly, and we're relieved to discover that Philips has reverted to a regular RGB subpixel layout, eliminating the frayed text and checkerboard effect of the BGR-based Momentum 43. We've no major qualms using the display with either PC or console, though the inherent limitations of VA technology are present. Viewing angles aren't as forgiving as IPS, with some colour shift when viewed off-axis, and though contrast is typically a strong point, a trained eye will notice black crush toward the centre of the screen, resulting in some loss of detail in dark scenes.

As a whole, the Momentum 32 does a better of job of juggling PC and console duties, and both purposes are aided by a form factor that's easy to place in most rooms. Maximum dimensions of 728mm x 604mm x 206mm are more forgiving than its 43in sibling, the stand is VESA compliant should you prefer to use an alternative, and upward-firing DTS speakers pack a surprising punch. The built-in stereo sound system is no match for a soundbar or external speaker setup, and is limited in the bass department, yet we rarely see a monitor sound as convincing as this.

One key criticism of the Momentum 43 was the availability of just one HDMI port, and Philips has addressed that issue this time around. Connectivity includes a trio of HDMI 2.0, one DisplayPort 1.4, audio in, headphone out, a connector for the external power brick, and a four-way USB 3.0 hub, with two ports supporting fast charging. A much better selection, and navigating the menus is effortless using the joystick control on the back. Philips ticks most of the relevant boxes, though we'd liked to have seen a remote control included as part of the bundle; for console gamers in particular it makes sense to be able to switch inputs or alter volume from afar. 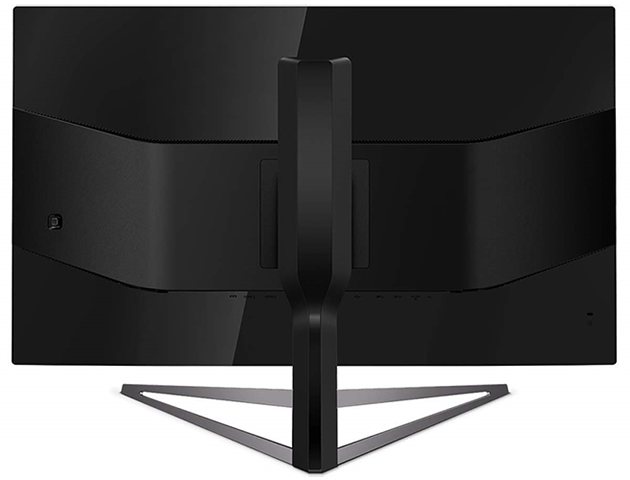 The sleek silver stand offers height adjustment of up to 110mm and -5º/+20º or tilt, however there's no option to swivel and the V-shaped base does occupy a fair amount of desktop real estate. Rounding off the package, a pair of RGB strips on the display's bottom edge offer Ambiglow functionality that in this instance works surprisingly well. Rather than display an arbitrary colour, Ambiglow analyses on-screen content to match lighting colour quickly and accordingly. The resulting effect isn't as impressive as full-blown Philips Ambilight, as seen on the firm's TVs, yet it is an effective form of ambient lighting that we've enjoyed having enabled. Brightness can be adjusted via the OSD (or switched off entirely) and there is an option to set a static colour if you prefer.

Are there any major pitfalls? Well, while we reckon the Momentum 32 is a better monitor, recent price cuts have brought the Momentum 43 firmly back into the picture. At the time of writing, the larger Philips panel can be found for £470, meaning you can get the larger screen with DisplayHDR 1000 certification for less than the cost of the newer 32in model. Bigger isn't always better, but Philips may need to be more competitive on pricing to prevent the Momentum 32 being overshadowed by its sizable brother.