Aorus describes the AD27QD as the "world's first tactical monitor," and it can afford to make such unusual claims through a range of gaming-orientated extras that can be found buried within the on-screen-display. We've been intrigued to see how Aorus handles the software side of things, and what we've seen thus far has left us optimistic, at the least. 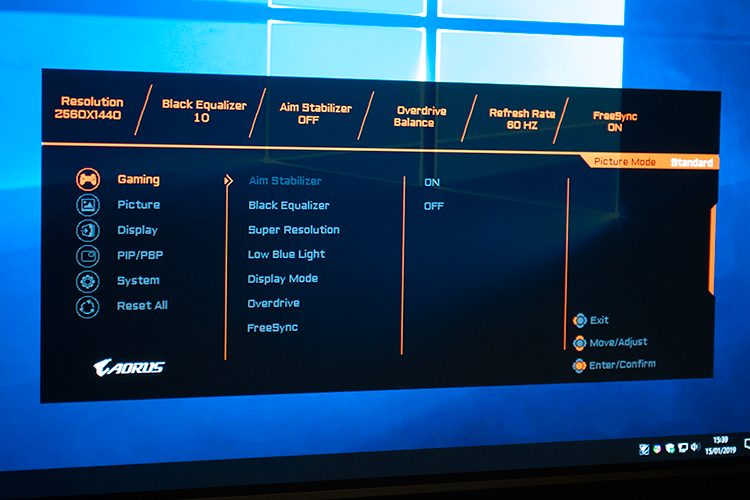 Firstly, the OSD is very nicely presented, and we like the fact that Aorus has used its brand colour here, rather than splashing orange highlights on the chassis itself. Moving between settings with the joystick feels intuitive, and there's quite a lot to sift through. Hoping to offer gamers an advantage over the competition, there are three features designed, in a way, to cheat the system without being detected.

Black Equalizer, as the name suggests, tweaks contrast to lighten dark areas without overexposing others, making it easier to see foes lurking in the shadows. Aim Stabilizer reduces motion blur to help soften the effects of in-game recoil, but drastically reduces overall brightness and can only be enabled by turning off FreeSync. Last but not least, Crosshair places an always-on target in the centre of the screen. There's an option to draw a crosshair of your own liking, in a choice of colours, and all these features run directly on the monitor itself, meaning no CPU overhead for the host PC. 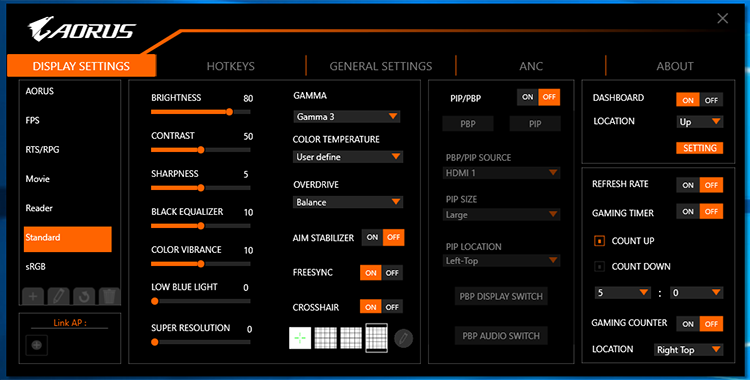 Aren't such features just an elaborate form of cheating? That's a different discussion entirely, but whether you agree with the idea of a Tactical Display or not, it's nice to see a gaming manufacturer actually introduce features that can make a difference in game.

Going the extra yard, Aorus also understands that making the most of these tactical functions isn't easy via the OSD alone. Though the joystick works well enough, you don't necessarily want to be traipsing through menus to turn a crosshair on. To that end, there's an optional Sidekick software utility for Windows that replicates all of the OSD settings in an easy-to-use interface. The app does a feel a tad laggy at times, and is quite clearly still in its infancy, yet it's far easier to change multiple settings quickly via software than it is via the on-screen menus. 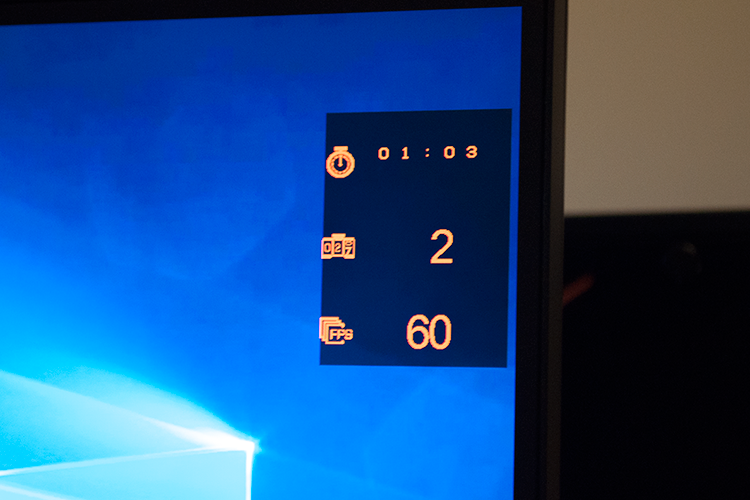 There's plenty to play with, and Aorus has implemented a few optional overlays that can prove helpful in the right scenario. The dashboard, for example, displays vital system stats in a position of your choice, though certain stats such as Mouse DPI and GPU Fan Speed are presumably only activated with Aorus hardware.

We preferred to keep the dashboard disabled - it occupies more screen area then we're willing to donate, despite the transparent background - but the on-screen timer, counter and FPS display, pictured above, could be useful assets. The timer can be assigned a hotkey and could, say, serve as a useful reminder of how long remains until the next in-game spawn, while the counter is a potentially helpful way of tracking recurring events. We're used to seeing gaming products riddled with gimmicks, but the AD27QD has features we can envisage gamers using on a regular basis. 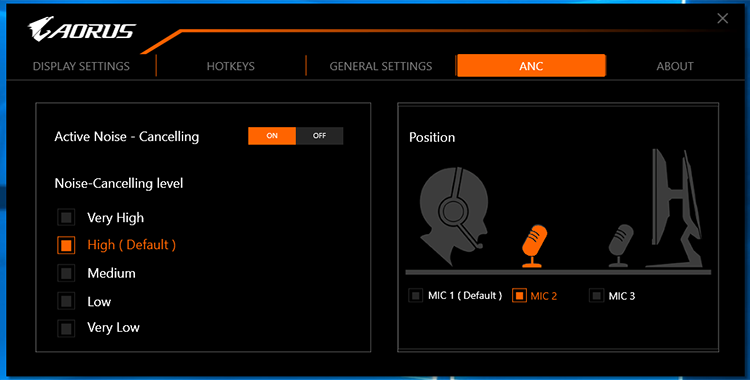 What else might a gamer want? Aorus reckons active noise cancelling could be the last piece of the puzzle. Connect a microphone to the analogue jack on the back of the panel, and the monitor will use its two built-in mics to identify and cancel out background noise. A good idea in theory? Perhaps, but noise cancelling obviously isn't supported via USB headsets, and though you do notice a reduction in background noise - keyboard clicks in particular are muted - voice quality suffers as a consequence.

The use of active noise cancellation and indeed the Sidekick software requires a USB connection between the monitor and PC, but all things considered, we like what we're seeing from Aorus. This is shaping up to be a gaming monitor with substance, though it's the quality of the panel that will make or break the AD27QD. Let's run those tests.