It is unusual for Intel or AMD to launch a high-performance motherboard chipset without releasing new processors at exactly the same time, thus ensuring the combination makes the most out of each other.

There's no secret that 11th Gen Core desktop processors, codenamed Rocket Lake-S, are coming soon, most likely in mid-March, but their natural motherboard counterpart, Z590, is already out in the wild.

10th and 11th Gen chips share the same LGA1200 socket, meaning that many, if not all, Z490 boards support the upcoming chips, and firms such as Gigabyte have already come out with declarations of Z490 compatibility for Rocket Lake-S' PCIe 4.0 capability.

Intel's thinking is that by having compatibility with Z490, there's a clear upgrade path for users who have already invested in premium 10th Gen hardware, while those building a ground-up rig will favour Z590 because, well, it is newer.

Gigabyte has understandably released a full roster of Z590 boards - 13 by our count. So what are the reasons for having so many when Z490 is, apparently, more than capable? The comparison sheet doesn't show a lot, but delving deeper, Z590 has native support for PCIe 4.0 x16 graphics and a CPU-attached PCIe 4.0 x4 M.2 slot for super-fast storage. Z490's can vary. Intel further improves USB support over Z490 by having up to three 20Gbps (USB 3.2 Gen 2x2) ports and a further four 10Gbps. 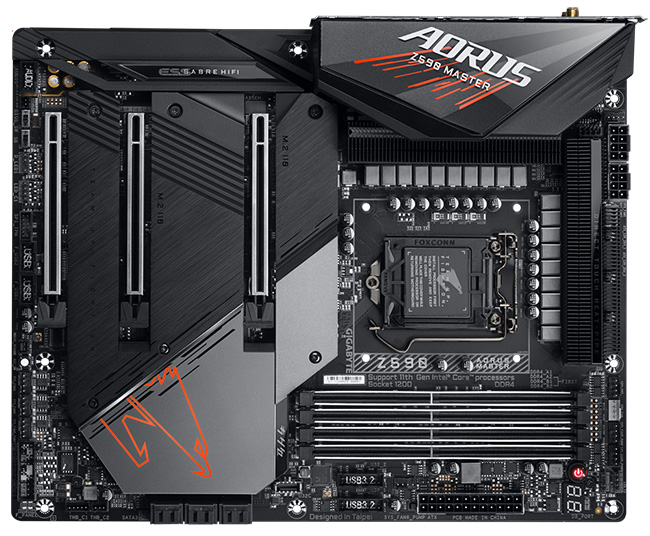 The Aorus Z590 Master sits nearer the top of the stack and is priced at £410. Though it looks very similar to the Z490 version now on sale for around £330, there are key differences to be aware of, and it's those we'll focus on. The primary M.2 slot, closest to the CPU, only works if you have an 11th Gen Core chip in the socket - and no-one does right now - so if using 10th Gen chips it is redundant and you are left with the two slots to the left, underneath the heatsinks. Z490 Master makes use of all three, albeit at PCI 3.0 x4 speeds.

Aorus uses the same Intersil ISL69269 PWM controller and ISL99390 90A power stages, but now increases the total count to 18 for the CPU rather than 14 on Z490 Master. These aren't true, distinct phases, however, as nine are twinned, but more is considered better, particularly for marketing. Another one goes to the GPU, and the total number is way overkill for practically all setups. We'd happily overclock a Core i9-10900K on the 12 phases available to, say, the £230 Z590 Vision G. Other improvements include a second USB 3.2 header, better voltage measuring points, and an extra two 4-pin fan headers. 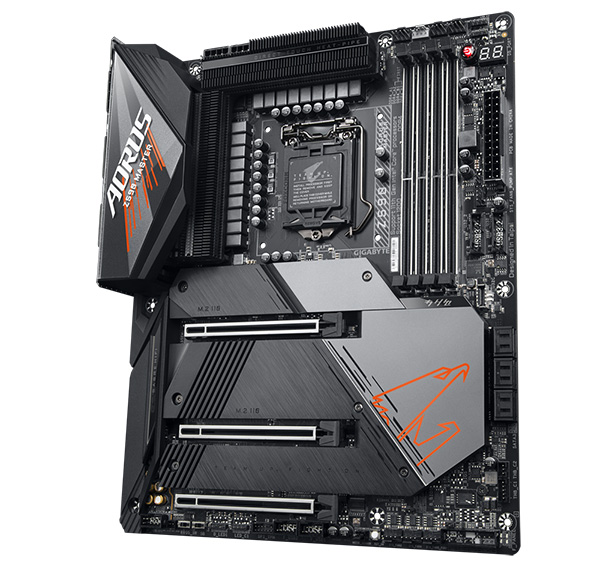 The power button may be hard to access if you have a top- mounted radiator. The reset is on the other side of the board, strangely, and we'd prefer to see them grouped together. RGB is present in the orange-coloured zones by the Aorus name on the integrated I/O shroud and the logo present above the chipset. It's tastefully done, too.

Note that getting this sleek-looking aesthetic means Aorus does away with x1 PCIe altogether. No bad thing in our book as we've yet to feel the need to use one of those slots.

Aorus uses a 1,920x1,200-resolution BIOS that's generally good. The simple layout means that, for most, very few changes need to be made. We simply ran the memory at XMP settings, reduced the speed to 2,933MHz to match the official CPU specifications, and then set everything to Auto. If matters do go awry, the board has a second BIOS accessed by a switch on the bottom of the PCB.

Changing it up on the rear I/O for the better, Z490 Master's HDMI gives way for Z590's DisplayPort. That Type-C port is of the full-fat 20Gbps variety, while USB 2.0 is kicked to the curb and replaced by four USB 3.2 (5Gbps) in blue. The remaining five red-coloured USB operate at 10Gbps.

We also like that Aorus has upgraded Ethernet from 2.5G to 10G from Aquantia. Not obvious and part of the chipset update, the WiFi also sees an upgrade, from AX201 to WiFi 6E AX210, which adds support for the 6GHz spectrum, but you'll need a compatible router to make the most out of it.

In summary, Aorus makes mostly sensible choices in the upgrades department. We appreciate the boost in USB and Ethernet connectivity, don't see the immediate benefit of more power stages, but are a tad miffed the primary M.2 slot doesn't function at all with a 10th Gen CPU.