We've already recommended some terrific laptops in 2019, and on the face of things, the Asus ZenBook 15 UX533FD may deserve a place on that list. Priced at £1,400 and marketed as "the world’s smallest 15-inch laptop," this super-sleek PC packs a new Intel Whiskey Lake processor, dedicated GeForce GTX graphics and a 15.6in IPS display into a thin and sexy frame. 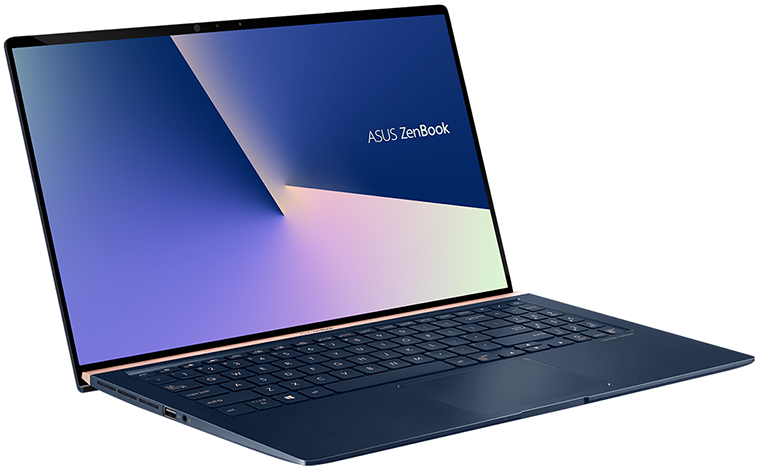 Dimensions of 354mm x 220mm x 17.9mm are wonderfully petite for a 15.6in system, but it's the weight rather than the size that has left us impressed. The Asus machine tips the scales at just under 1.6kg, making it noticeably lighter than a lot of the competition. And the dainty form factor shouldn't be mistaken for a lack of quality. UX533FD enjoys an aluminium chassis that feels solid, and though there is a hint of flex near the centre of the keyboard tray, we like the overall balance between rigidity and lightweight construction.

Of course, it helps that the laptop looks rather trendy, too. Asus continues to employ a signature spun-metal finish on the lid of its ZenBooks, and in this instance the Royal Blue colour scheme with contrasting Rose Gold trim is different to almost anything else on the market. Is it a tad girly? Perhaps, but we always like to see something different, and the Rose Gold lettering on the keys is a very nice touch.

Completing the modern aesthetic is the display bezel, or lack thereof. The border measures just 3mm at the sides, 4.5mm at the bottom and 6.4mm at the top. A lot of manufacturers have developed a habit of going as thin as possible above the screen, but we like the fact that Asus leaves just enough space for a webcam and IR sensors supporting Windows Hello face recognition. Implementation seems perfect, however the catch is that the 720p webcam offers poor quality images, and though the IR face recognition works, it is a little slow in sub-optimal conditions. 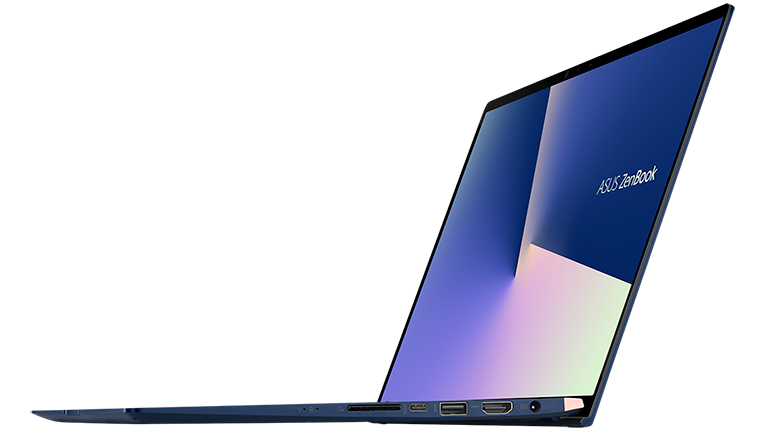 Having a 92 per cent screen-to-body ratio is what first catches the eye, but the display has another neat trick in the form of an 'ErgoLift' hinge that folds under the laptop to lift the keyboard to an angle of three degrees. That's hardly enough to have a drastic impact on the typing experience, however it does feel a smidgen more comfortable, and the gap beneath the system can only mean good things as far as airflow is concerned. The slight elevation also seems to help the downward-firing Harman Kardon speakers, which deliver startling amounts of volume, but having recently enjoyed the rich soundbar of the Lenovo Yoga C930, the relatively tinny audio output on offer here can be described as good but not great.

We have similar feelings about the keyboard and trackpad. Asus has attempted to go the whole hog by including a numpad, but the end result is a somewhat cramped typing experience. Might we have preferred a tenkeyless layout? Perhaps, but key travel is good at 1.4mm and the backlight is even throughout. Similarly, the precision trackpad is perfectly capable, though its positioning isn't ideal. Due to the full-size keyboard, the trackpad is some distance across from the spacebar, and takes a little getting used to. Nothing really to worry about, but if you are seeking a truly top-notch input experience, the ZenBook 15 isn't a match for the likes of the Dell XPS 15 or Microsoft Surface Book 2.

It'll take more than just the slinky chassis to justify the £1,400 price tag, so what does the ZenBook 15 UX533FD have up its sleeves? At the helm of the system is a quad-core Intel Core i7-8565U processor. Built on a 14nm++ node codenamed Whiskey Lake, the chip represents a third refinement of the 8th Gen Core architecture and benefits from in-silicon security fixes and the ability to turn up the clock-speed dial. For the top-of-the-range i7-8565U, that means a peak turbo frequency of 4.6GHz and integrated UHD 620 graphics in a tidy 15W envelope. 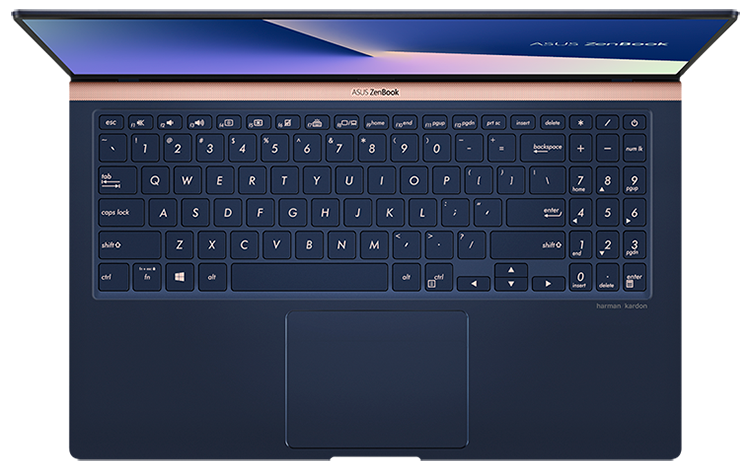 Joining the CPU is 16GB of dual-channel DDR4-2600 memory, a 512GB WD PC SN520 M.2 SSD and GeForce GTX 1050 Max-Q graphics that take over from the Intel IGP when the need arises. The use of an entry-level Max-Q GPU limits the laptop's gaming credentials - we're expecting middling results at the native 1080p resolution - but the selection of low-power components should help keep the 73Wh battery going for quite some time.

We're disappointed to find that Asus doesn't offer a touchscreen option; however there's no real shortcoming in the connectivity department. In addition to Gigabit WiFi and Bluetooth 5 from the integrated Intel Wireless-AC 9560 adapter, the UX533FD sports three USB 3 ports (two Type-A, one Type-C), HDMI output, an audio jack, SD card reader and connector for the small 90W power supply. There's no love for Thunderbolt, however we like the fact that Asus includes a USB-to-Ethernet adapter as part of the bundle. A well-rounded specification in a striking package? Let's see what the benchmarks reveal.