Who makes the best custom-cooled graphics card? That's been debatable for quite some time, with AIB partners struggling to compete with Nvidia's Founders Edition in terms of both price and presentation, but MSI has stepped up to the plate and the firm's Suprim X is our current pick of the bunch.

Having sampled the cooler in RTX 3070 Ti form, we deemed MSI's implementation "an excellent choice for those gamers who prefer to keep noise levels down to a minimum," and came away suitably impressed with performance and build quality. When the opportunity came to put the superior RTX 3080 Ti Suprim X through its paces, we naturally jumped at the chance. 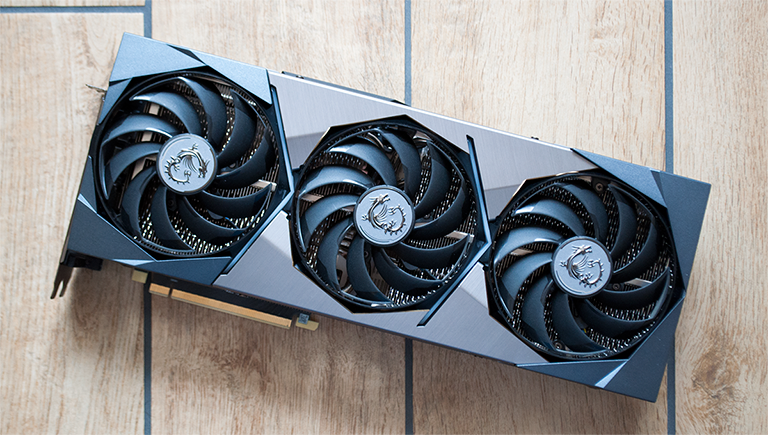 Pricing? Sky's the limit. Odds of getting one? Slim to none. That's the all-too familiar bad news, yet we live in hope that one day the world will return to some form of normality. England will bow out of major tournaments at the group stage, you'll be able to travel abroad without fear of being stranded, and tech will be in stock and available to purchase.

Were choice to be restored, we feel confident in stating that few enthusiast cards would offer the appeal of MSI's RTX 3080 Ti Suprim X. Measuring 336mm long, 140mm tall and 61mm deep, this custom monster dwarfs the Founders Edition and immediately feels a significant piece of kit. The grey-and-black aesthetic should be familiar - the design is for the most part the same as the RTX 3070 variant - and given the sheer bulk, we're of the opinion MSI has done well to keep it looking reasonably smart. 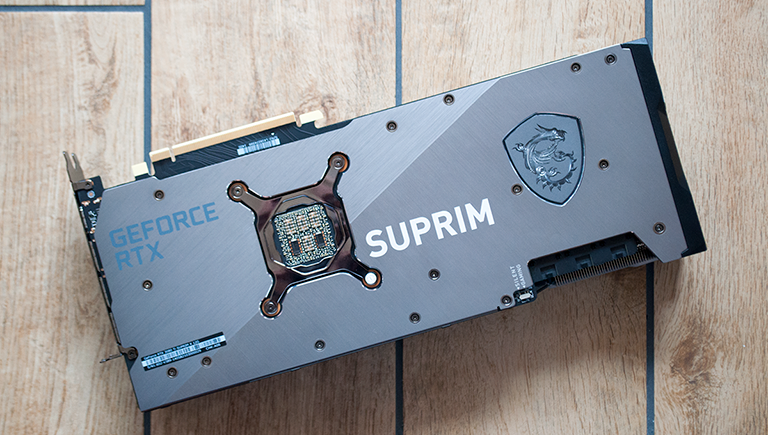 Aiding aesthetics is RGB lighting that is much improved when compared to the firm's older Gaming X models. Colours now appear vibrant, with smooth transitions and less visible hot spots, and three lighting zones offer full customisation; the chevrons between the three fans, the Suprim logo across the top edge, and the MSI Dragon on the rear.

Of course, on a card of this scale, cooling is of paramount importance. All three 95mm Torx 4.0 fans switch off at low load, and when they do quietly spin into action, they are aided by seven thick heatpipes traversing the board-encompassing heatsinks, thermal pads on all the vital components, as well as additional dedicated heatpipes and heatsinks for the memory modules. Don't expect temperatures to be a problem, and with the aluminium backplate and metal anti-bending strap, there's little sign of sag despite the card tipping the scales at just over 1.9kg. 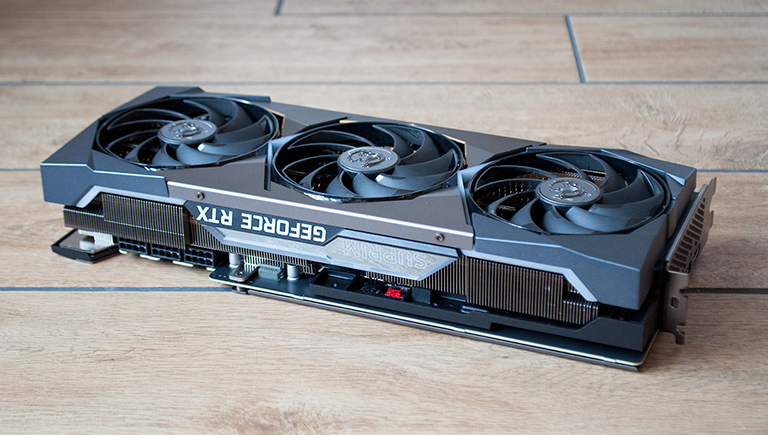 The upside to such lofty cooling is that MSI is able to let frequencies run wild. Right out of the box, boost clock is ramped-up from 1,665MHz to 1,830MHz. A 10 per cent factory overclock is always welcome, yet the on-paper numbers don't reveal the full story as our logs show the Suprim X card operating at ~1,965MHz during real-world use - the fastest we've seen from any RTX 3080 Ti card to date.

It's a shame MSI hasn't applied the OC philosophy to memory - the 12GB GDDR6X frame buffer is stock clocked at 19Gbps - and do note that the card requires three eight-pin power connectors as standard. Not much of a problem for today's power supplies, but I do like a clean build, and three GPU cables always looks unnecessarily messy. 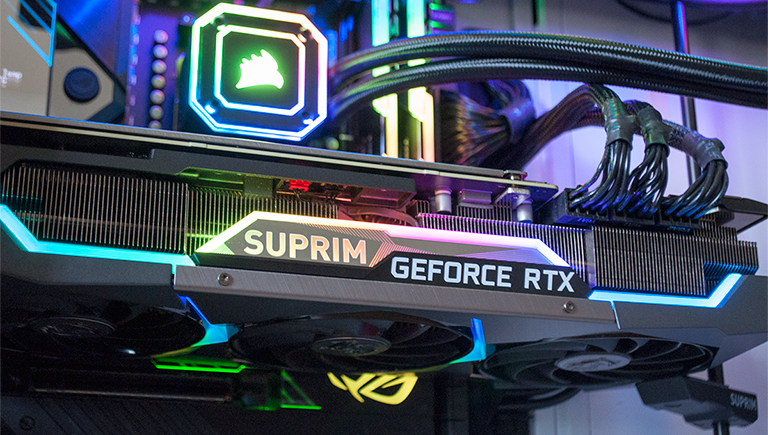 Still, it's a handsome-looking board, and MSI rounds out the package with a dual BIOS offering preset silent and gaming (default) modes, plus a vertical support stand that helps alleviate any concerns of a nearly 2kg monster leaning off a PCIe slot. Elsewhere, display outputs, as expected, comprise three DisplayPort 1.4 and one HDMI 2.1.

Our favourite cooler attached to Nvidia's second-rung GeForce GPU ought to deliver solid results. At these frequencies, might the Suprim X even leapfrog a factory-overclocked GeForce RTX 3090? Let's roll the numbers and see what's what.