Nvidia's GeForce RTX 3070 Ti has been met with a lukewarm reception. The latest addition to the Ampere range is thirstier than anticipated, has a stingy 8GB frame buffer, and doesn't manage to close the gap to GeForce RTX 3080 by a meaningful amount. That's arguably no bother, mind, as every RTX 3070 Ti manufactured will be snatched off the shelves quicker than you can say "the way it's meant to be played."

The $599 Ti isn't the card we'd choose at its purported MSRP, but these days there's little sense in trying to make a value argument, and we're at the stage where the best card is the one you can actually buy. That being the case, if you do happen to stumble upon an MSI GeForce RTX 3070 Ti Suprim X, be quick to add to basket as it is a fine example of a robust and well-tuned custom design. 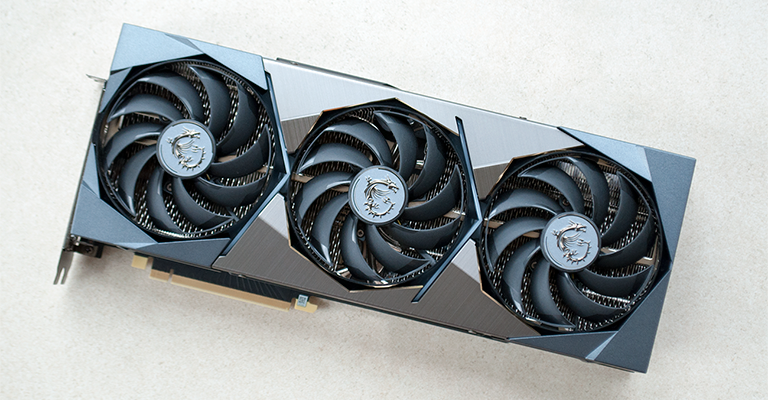 This is our first in-house examination of the firm's much-vaunted Suprim cooler, and it is fair to say that MSI has raised the bar and stepped up to the challenge laid down by Nvidia's Founders Edition. What's immediately apparent is that noise levels have been reduced to an absolute minimum - so much so that, when gaming, we had to peer inside the chassis just to make sure the GPU fans were in fact spinning; it really is that quiet.

Suffice it to say that build quality feels solid throughout, and we quite like the presentation, too. Though not as sleek as Nvidia's reference board, MSI's angular build has an aggressive look and feel that works well, as does the colour scheme of grey, silver and black. RGB lighting is also an improvement over older Gaming X Trio models, with smooth transitions and vibrant colour applicable to the chevrons between the three fans, the Suprim logo across the top edge, and the MSI Dragon on the rear. 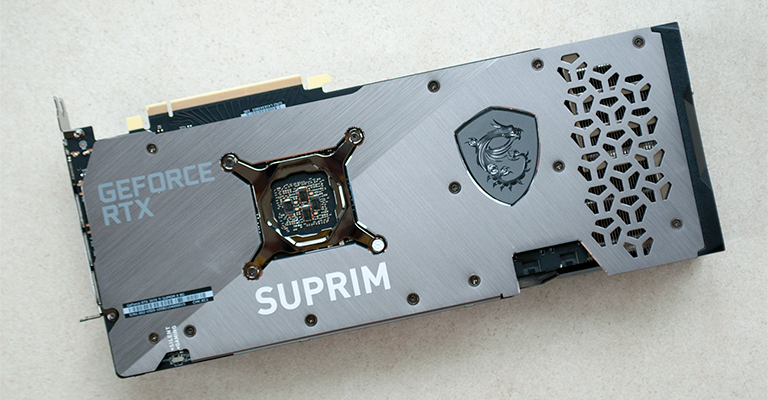 If there's a caveat it's that MSI might have been a little too heavy handed in its branding. Both the top and rear carry Suprim and GeForce RTX logos, and we're of the opinion the card would benefit from a cleaner, less-cluttered backplate. As far as implementation goes, that's about it for our list of criticisms of what is otherwise a well-thought-out cooler.

Twinned blades on the 95mm Torx 4.0 fans promise "unprecedented levels of focused air pressure," seven thick heatpipes help dissipate heat across board-encompassing heatsinks, there are dedicated heatpipes and heatsinks for memory, and thermal pads reside on all the relevant components. Everything but the kitchen sink, yet it is MSI's attention to detail that brings it all together. The aluminium backplate, coupled with a rigid metal anti-bending strap, provides good overall rigidity, and the fan curve is about as refined as we've seen on any partner card. All three blowers switch off at low load, and when they do kick into action, they do so so smoothly that the transition will go unnoticed in most builds. 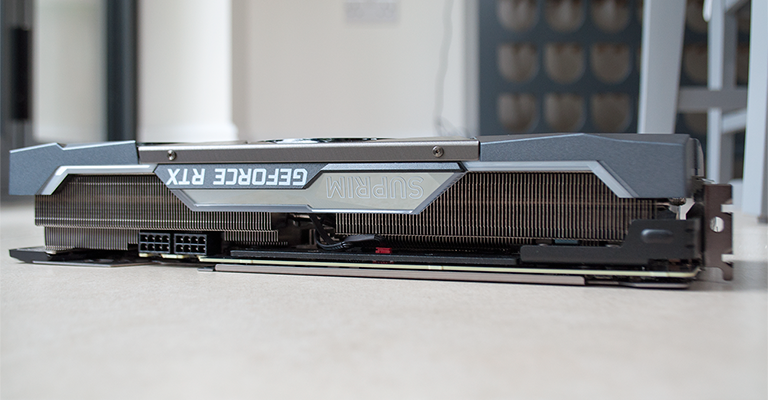 Plenty to like, however all that cooling goodness does come at the expense of size and weight. The Suprim X card tips the scales at almost 1.8kg, while dimensions of 335mm x 140mm x 61mm make it 68mm longer and 28mm taller than the Founders Edition. You most certainly won't be installing anything else in the adjacent PCIe slot - this is a three-slot monster - but that's no bad thing in our book. There's no SLI support on RTX 3070 Ti, so gamers won't be adding a second GPU anyway, and if a card needs to be this large to be extremely quiet at all times, then so be it.

Rounding out the package, MSI bumps the boost clock from 1,770MHz to 1,860MHz right out of the box, though the 8GB of GDDR6X memory remains dialled-in at a standard 19Gbps. There's also a dual BIOS with preset silent and gaming modes, while power is sourced from two recessed eight-pin PCIe connectors. 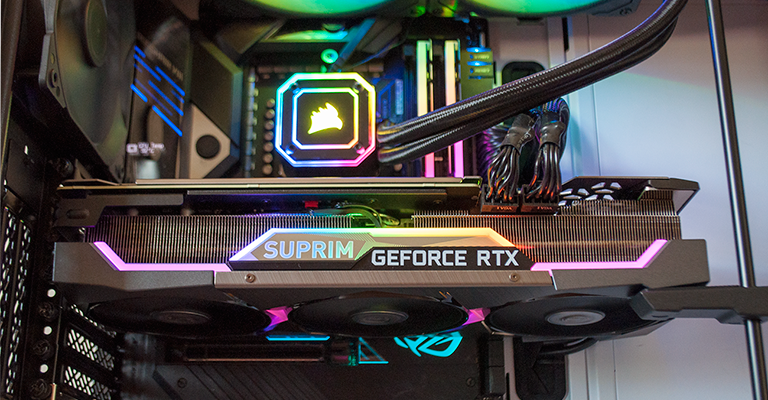 There are no surprises in the outputs department, with MSI adhering to the usual quartet of three DisplayPort 1.4 and one HDMI 2.1, but there is a neat addition to the bundle in the form of a vertical support stand that does a fine job of preventing any unwanted sag inside our test platform.

We aren't expecting any performance miracles - RTX 3070 Ti's limited overclocking headroom suggests that Suprim X will be only marginally quicker than reference - but wait until you see how MSI's cooler compares in the noise tests. On to the numbers.