A severe lack of availability continues to plague recent GeForce and Radeon GPUs. There's no immediate fix, with our sources suggesting shortages will extend well into the new year, yet if you enjoy reading about such graphics cards, you're in luck as review samples defy the odds by landing at our doorstep on a frequent basis.

Wanting to get in on the RTX 3060 Ti action is Asus, whose TUF Gaming OC model is on the review bench today. 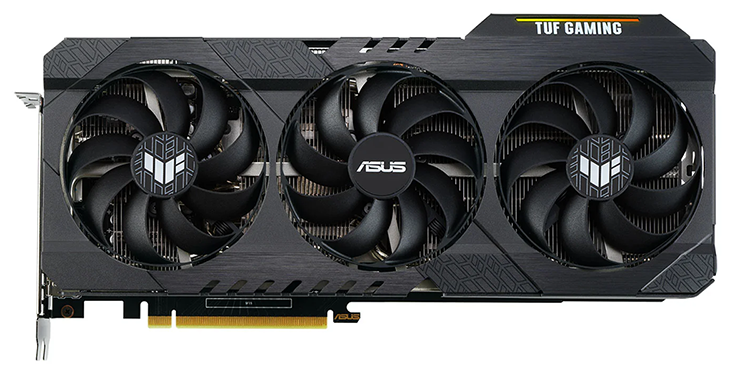 As expected, Asus brings plenty of variety to the RTX 3060 Ti party with eight models to choose from. The top-end ROG Strix OC commands a hefty £515 price tag, the compact Dual Mini matches Nvidia's reference card on price at £370, and our TUF Gaming OC sits nearer the middle of the pack at £445.

That's a smidgen less than MSI's recently reviewed Gaming X Trio, yet the threat comes not from rival partners, but rather Nvidia's Founders Edition board. A £76 premium over the RTX 3060 Ti FE is significant, and if you're spending this sort of money, you really need to be looking further up the ladder. The RTX 3070 FE, when available, is a better class of GPU and a far tastier proposition at £469.

Pricing isn't the TUF Gaming OC's strong suit, and that's a shame as the same cooler has proven able on GPUs as powerful as RTX 3090. Cooling potential isn't in doubt, and build quality is excellent throughout, with the aluminium shroud exhibiting no sign of flex, and three fans that switch off when temperature drops below 55ºC. As before, the central fan spins in the opposite direction to the outer two, supposedly to reduce turbulence, and during use we've found the fans to be well tuned at all times - the transition between off and on is seamless, and they remain wonderfully quiet at all times.

As a three-slot beastie weighing over a kilogram and measuring 301mm x 143mm x 54mm, you might expect a hefty overclock right out of the box, but Asus keeps things modest by upping boost frequency from 1,665MHz to 1,755MHz. Sounds decent enough, yet our experience of RTX 3060 Ti has taught us that on-paper numbers mean little, and though this is advertised as an OC card, it is worth pointing out that Asus calls on a single eight-pin power connector and keeps board TDP limited to 200W, suggesting that real-world performance is going to be in line with the Founders Edition.

Cooling as elaborate as this could be deemed overkill for an RTX 3060 Ti, yet there are upsides. We quite like the industrial look of the backplate and card as a whole - it isn't garish thanks to RGB lighting being limited to the TUF Gaming branding across the top - and Asus reckons its TUF models are subjected to a 144-hour validation trial prior to shipping, so we expect good things in terms of long-term reliability. Better still, for those who appreciate a quiet PC, our testing reveals that the Asus is the pick of the bunch when configured to its secondary BIOS.

Having a dual BIOS option is always handy, and though they are labelled as Performance Mode and Quiet Mode, there isn't a great deal to separate the two. Boost frequency doesn't stray from 1,755MHz in either mode, the 8GB of GDDR6 memory remains glued to 14Gbps, and the only difference that we could notice is that peak fan speed is reduced by around five per cent. Even then, we had to peruse the log files just to be sure, as the card is well poised in either mode. 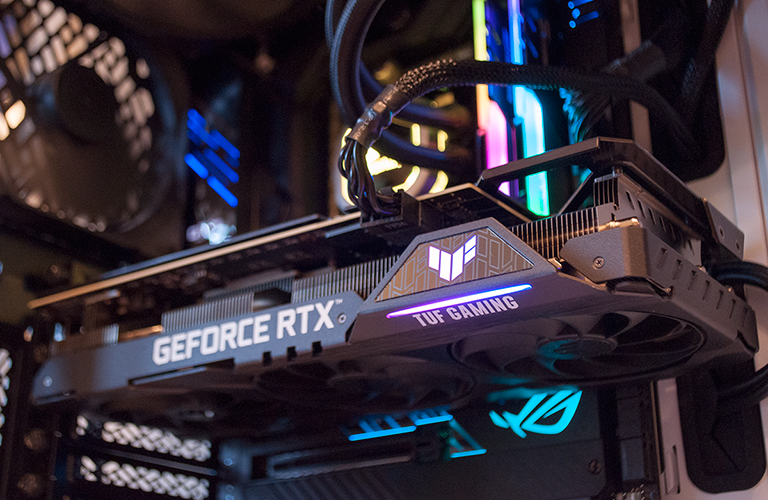 Rounding out the tweaks is a secondary HDMI 2.1 in addition to the three DisplayPort 1.4, though just four can be used concurrently. A solid QHD card whose pricing is our main concern, yet that's hardly going to perturb those gamers who are starved of new GPU stock.

Looks rather tasty inside our test platform, so let's run the numbers and see how the Asus RTX 3060 Ti stacks up to competitors from MSI, Gigabyte, Palit and, of course, Nvidia.