Nvidia has set the benchmark for industrial design with a long line of Founders Edition (FE) cards. Aesthetically impressive and built to high standards, it can be argued previous iterations have favoured form over function. Cooling performance has not been as robust as the best add-in cards (AIC) from the likes of Asus and MSI and they've been noisier at both idle and load. Looking to right those wrongs is the latest model that laps up that 320W TDP.

Having to deal with the extra power and increased transistor density - a double whammy - is not a job for RTX 20-series coolers. No, sir. Nvidia has therefore gone back to the drawing board and built a cooling solution that, it claims, is not only quieter than the current high-end FE solutions but cooler too, which is impressive given the extra 70W it has to deal with.

Measuring 285mm long, 112mm high and accommodating the full two slots, it is the cooler, not the PCB, that takes up the space. Nvidia's thermal and noise strategy is to remove as much of the PCB as possible, leaving the most room for case airflow to circulate through the cooling apparatus, through the voluminous fins and out the top or rear.

Here's the card from the other side. Note the second spinner on the back? It's a flow-through pull fan drawing air in from the fin-stack and pushing it towards the CPU and rear fan exhaust on your chassis. It's important to understand there is no PCB interfering with the airflow on this side; it's all fan, heatpipes and fins.

The other fan, also 80mm, closest to the I/O bracket, can run at different speeds depending upon temperature and load. Both switch off at low loads. This one pushes air on to the cooling and out the rear. Nvidia still employs a hybrid vapour chamber and array of heatpipes to move the heat away to the host of aluminium stacks that constitute the bulk of the card. 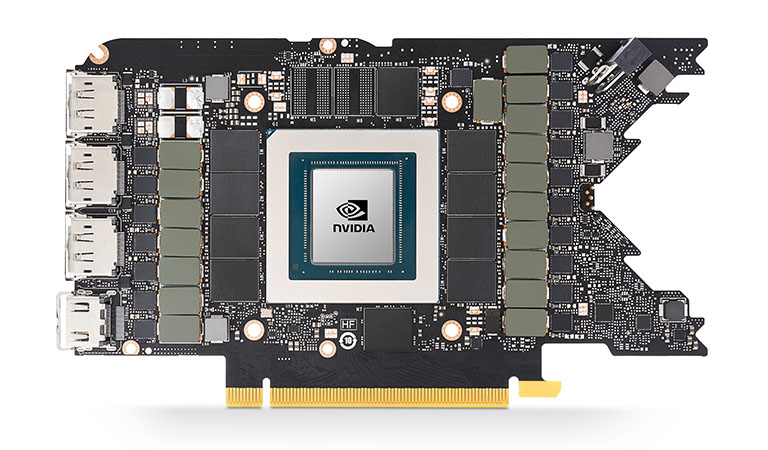 Speaking of the tiny PCB, here it is. Not much space for anything else, is there? 18 power phases regulate the power delivery to what is a high-end system-on-chip (SoC). The 'missing' memory chips speak to the GeForce RTX 3090 that ships with a preposterous 24GB of GDDR6X through a wider 384-bit pathway, but remember, the RTX 3080 is no shrinking violet in its own right. Nvidia adopts an almost console-like cooling/circulation design philosophy with Ampere whilst still being confined to PC dimensions.

Moving back to the card itself, the GeForce logo is moved over to one side. It's backlit in white and is in keeping with the minimalist design. The same lighting creates a white V-shape by the nearest fan on this side and replicates it for both Vs on the front. Note the power connector in the middle? This is where the PCB actually ends. The need to remove as much of it as possible, for throughflow reasons discussed above, means that Nvidia wants to minimise protrusions that eat up valuable space and take away from cooling potential.

Built like the proverbial tank, the RTX 3080 FE weighs in at 1,358g but doesn't sag because of its rigidity. Subjectively, it looks attractive sat in any modern build, augmented by a wraparound heatsink design and black-and-grey colour scheme. Eagle-eyed readers will notice that going down this route leaves no space for SLI connectors via NV-Link; that feature, as mentioned, is limited to the champion RTX 3090.

Nvidia upgrades HDMI to v2.1, offering up to 8K60 12-bit HDR from a single cable with Display Stream Compression active. The same output can be achieved over DisplayPort 1.4a and DSC. Adding a second DP cable increases output to 8K120. GeForce Experience can now capture up to 8K 30 FPS, and support HDR capture at all resolutions, too.

Had enough words? Want to see some charts? Let's go.