With AMD set to launch its entry-level Radeon RX 5500 later this week, Nvidia has seen fit to rejig its product stack with the introduction of the GeForce GTX 1660 Super and GTX 1650 Super. The former arrived back in October to somewhat muted acclaim, and GTX 1650 Super, the new baby of the Turing portfolio, has since made its way to retail priced from $159.

You might assume GTX 1650 Super to be essentially a GTX 1650 at faster speeds, but that isn't the case. In order to bolster performance at this end of the market, Nvidia has opted to build its new entry-level solution on the foundations of the TU116 chip featured in the GTX 1660 series.

The downgraded 284mm² die carries 20 functioning SM units, out of a maximum 24, resulting in 1,280 shaders allied to 80 texture units, 32 ROPs and a 192-bit memory bus connected to a 4GB GDDR6 12Gbps frame buffer. A welcome step in the right direction, as GTX 1650 performance was found to be left wanting, even at the ubiquitous 1080p resolution, and a near-45 per cent increase in shaders, coupled with both wider and faster memory, ought to deliver a significant bump in framerate.

Are they any downsides? Well, the 6.6bn transistor chip won't be as cost effective for Nvidia to product as its 3.7bn transistor brethren - this has been reflected in a $10 increase in MSRP - and GTX 1650 Super's heightened 100W power envelope necessitates a six-pin power connector as standard. 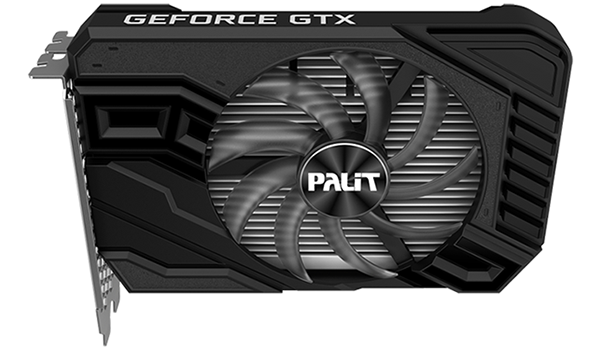 A number of Nvidia partners have released a slew of GTX 1650 Super variants, but as is to be expected on a low-key launch, the vast majority repurpose existing entry-level coolers. Our review card, Palit's GeForce GTX 1650 Super StormX OC, takes a sensible approach with a simple black shroud, no backplate, and no form of lighting.

The modest design is presented in a dual-slot 168mm x 122mm x 40mm form factor that is well suited to a small-form-factor build, and a total weight of just under 500g isn't likely to place any strain on the motherboard. The bulk of that weight is attributed to the underlying heatsink, with Palit eschewing heatpipes and a copper contact plate in favour of a single, large slab of aluminium beneath the 95mm fan. 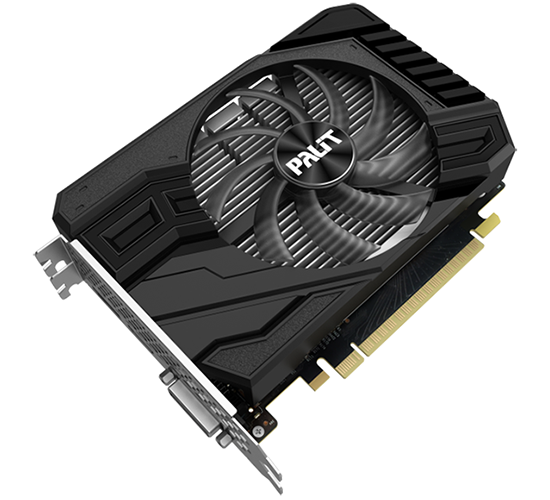 There are few frills to mention, though Palit does apply a mild overclock at the factory. Boost clock is raised from 1,725MHz to 1,770MHz, representing a less-than three per cent increase, while memory ships at the standard 12Gbps. Cooling shouldn't be a problem, yet during use we've found the card to be noticeably louder than anticipated; the fan doesn't turn off at low load, and the noise profile ranges from clearly audible when idle to quite distracting when gaming.

Elsewhere, power is sourced from a single six-pin connector located on the top-right edge, there's no support for SLI, as you'd expect on a GPU of this ilk, and display outputs comprise DisplayPort 1.4a, HDMI 2.0b and dual-link DVI.

UK pricing for Palit's OC card currently sits at around £157, representing a minor premium over stock-clocked models starting at £150, though Nvidia's competitiveness is hard to gauge before the rival Radeon arrives on the test bench. We'll have a complete picture in just a few days' time, but for now, let's roll the benchmarks and see what GTX 1650 Super can do.