Nvidia's release of the GeForce GTX 1070 Ti GPU further cemented the firm's PC gaming credentials in the premium end of the market. With cards available for £420 from the usual bevy of add-in board (AIB) partners, the Ti variant, a conflation of the GTX 1070 and GTX 1080, represents business as usual.

True, except that this launch has been different because Nvidia has taken the unusual step of stopping partners from overclocking their cards out of the gate. Every GeForce GTX 1070 Ti we have come across features the same 1,607MHz core and 1,683MHz boost speeds, along with GDDR5 memory chugging along at 8Gbps. Such a strategy makes it very difficult for an AIB to sell its premium GTX 1070 Ti offering based on speed alone.

Nvidia's undisclosed rationale is that enabling partners to overclock as they wish, preserving the status quo that has existed for a long time, would put GTX 1070 Ti OC's performance too close the GTX 1080's for comfort. Does such thinking mean you should look at the cheapest GTX 1070 Ti, priced at £419, and run with that, overclocking as you go?

It so happens the cheapest variant of this new GPU is Nvidia's own Founders Edition.

We've met before, haven't we? The Founders Edition's distinctive design is familiar and classy, and rather than upset the apple-cart, Nvidia uses the same heatsink design that has been paraded on other 10-series FE cards. The card's 10.5in long, takes up a strict dual-slot form factor, and tips the scales at 1,044g.

There's little reason to change anything because the underlying GTX 1070 Ti GPU, consuming approximately 180W under the pump, ought to be within the remit of this heatsink. Other than the different name being etched on the left-hand side, this cooler is identical to the one present on the GTX 1080 FE, which will surprise precisely no one.

Underneath, Nvidia hooks up a copper baseplate to the GP104-300 die. Heat is pulled away from it via established heatpipe technology and then transferred to the enclosed fin array. Aiding matters further, thermal tape is sandwiched between the 8GB GDDR5 memory and VRM components, while a single radial fan, on the right, pushes air across the whole assembly and out of the back.

Historical analysis has shown that while the design appears good on paper, the cooling capacity is fundamentally poorer than a quality aftermarket design from the likes of Asus or EVGA. FE cards have been afflicted by more noise, higher temperatures, and relatedly, lower boost clocks as a direct result. We'll see how this one fares a little later.

A full-coverage rear heatsink is a recent addition to the FE fold. Just above are a couple of fingers that enable two-card SLI via a high-bandwidth bridge, though we wonder just how long Nvidia will support multi-GPU given the diminishing appeal of running more than one card. Just like GTX 1070 FE and GTX 1080 FE, a single eight-pin connector is positioned right on the edge of one side, facilitating a clean build.

The PCB, meanwhile, uses a five-phase, dual-FET supply (10 phases in total), handy for providing clean power at both stock and overclocked speeds, and if previous results are anything to go by, expect the boost speed of this card to approach 2,000MHz without any additional voltage. 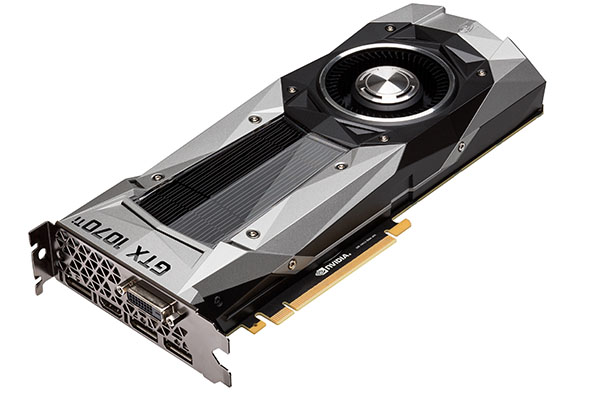 Dual-link DVI-D, HDMI 2.0b, and 3x DisplayPort 1.4 keep output consistency with other Founders Edition cards. And that's your lot; this is a strict reference interpretation that Nvidia has become well-known for.

Nvidia's decision to disable partners' ability to overclock their cards out of the box and a keen price for its FE, which is the cheapest of the lot, going against the recent grain of charging a premium for a Founders card, indirectly tells us that the green team is exercising more control than ever before. But should you buy an FE card? Let's roll the benchmark dice and find out.