Remember the extravagant and absurdly expensive RoG Ryujin 360 cooler? Launched back in 2019 as "the ultimate thermal solution," the tarted-up Asetek-based cooler flattered to deceive with a range of eye-catching features that ultimately struggled to live up to the £230 billing.

Not the ideal start, yet Asus is not to be dissuaded and is back with a second-gen model that, believe it or not, is even more outlandish and retails at a price point that will test the resolve of even the most hardened enthusiast. Enter the RoG Ryujin II 360.

According to Asus, the upgraded model is expected to arrive at retail carrying an estimated €330 MSRP. This isn't confirmed, but it is worrying that the only UK listing we've been able to find at the time of writing has the cooler positioned at £400 on UK shores. What do you get for such a lofty amount? Well, there are key upgrades throughout, but the underlying proposition retains a familiar feel. This is now a seventh-generation Asetek pump and 360mm radiator, and as before, supports all the latest Intel and AMD sockets and comes bundled with a trio of Noctua NF-F12 industrialPPC PWM fans capable of speeds of up to 2,000RPM.

It is nice to see high-quality fans included as standard - the Noctua's look and feel particularly well built - yet it is worth pointing out that the industrialPPC models are aimed squarely at demanding environments. The fibre-glass reinforced polyamide construction and certified water and dust protection bodes well for mission-critical applications, but these are high-speed fans and come with a disclaimer stating "they are not as quiet as other Noctua fans and less suited for low-noise PC builds." Point is, don't expect the Ryujin II 360 to be among the quietest liquid coolers.

The key upgrade, of course, is the redesigned CPU block. Asus still includes a small 60mm, 4,800RPM fan beneath the lid in an attempt to circulate air among VRMs and nearby components, but on top the 1.8in display of the first-generation model has been replaced with a brighter 3.5in LCD panel that we're told is the largest available on any AIO cooler.

We must admit, it's a good-looking display with ample customisation opportunities - more on those later - but the block itself does appear somewhat bulky. Measuring 78mm x 88mm x 81mm, the rectangular build isn't as refined as some of the more elegant options out there, and even with the display turned off, the large plasticky block doesn't go unnoticed. Note also that the screen is designed for a landscape orientation, meaning the cooler should be installed with the pipework exiting from the bottom. 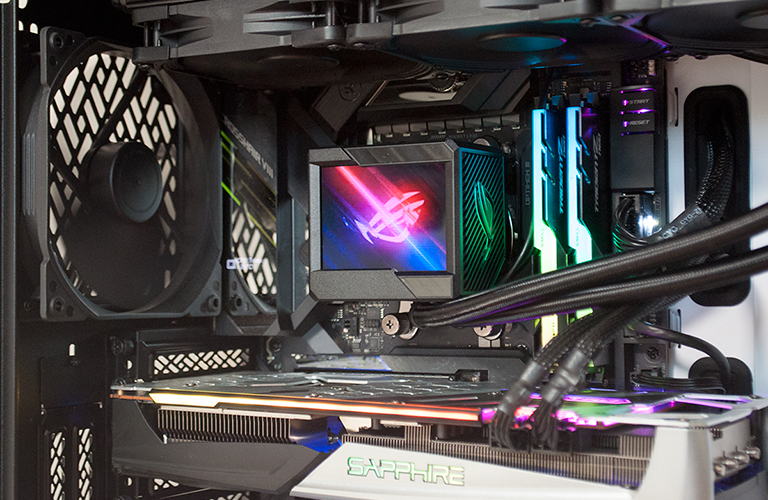 Eye-catching though it is, there is a question mark over whether or not a 3.5in display and bundled Noctua fans are enough to warrant the eye-watering price tag. Beneath the finery this remains a generic Asetek cooler, complete with 121mm x 394mm x 27mm aluminium radiator attached via 380mm of sleeved rubber tubing. Don't expect premium features such as copper radiator construction or refill ports; heck, there's not even any spare thermal paste included in the box. All you get is what's pre-applied to the copper contact plate, though to Asus's credit the cooler is backed by a six-year warranty as standard.

The display is ultimately the key selling point and RoG Ryujin II 360 brings plenty of pizzazz with minimum fuss. Installation is as straightforward as any other Asetek solution - simply attach the standoffs to the motherboard then secure the block in place using four thumbscrews - and Asus has taken the time to clear up some of the cable clutter. Ryujin II comes bundled with a four-way, SATA-powered fan hub, keeping a lot of cabling out of view. Just the two cables emanate from the block; a mini-USB to attach to the hub, and a nine-pin USB for connecting to an available motherboard header. Said hub does also include a quartet of aRGB headers, and though they aren't used by the cooler, there's nothing to stop you synchronising additional lighting of our own. 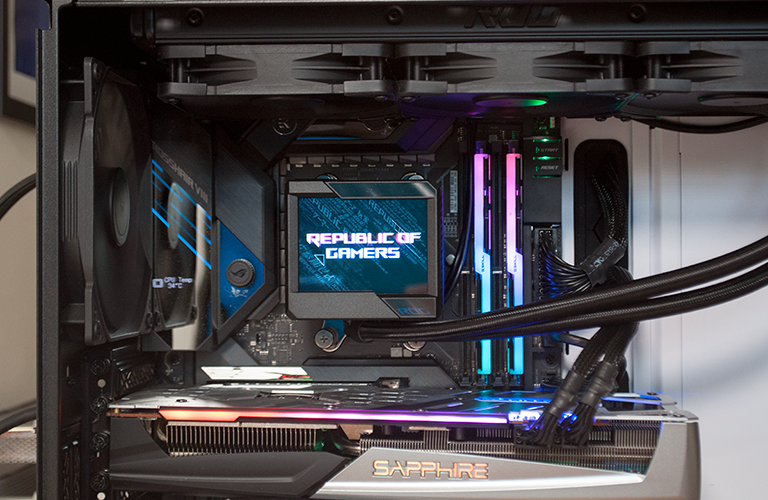 It is all going to boil down to the usefulness of the display, and the quality of customisation via the accompanying Armory Crate app. We approached with caution having had poor experiences with Asus's software in the past, and the first signs weren't encouraging as the app repeatedly failed to install. When the software did decide to work, the installer went right ahead and littered our test PC with eight different components. We're of the opinion a CPU cooler shouldn't be cluttered or complicated.

Still, the Armory Crate is worth installing as it serves a couple of important roles. Firstly, in its out-the-box configuration, the Ryujin II 360 would operate with all fans set to a fixed RPM. The resulting temperatures proved healthy, but noise levels were distracting, registering 36.7dB on our sound meter whether the system was idle or under load. Loading the software and applying the latest available firmware update shifted the cooler to a noticeably quieter balanced profile that dynamically adjusts the speed of the pump, pump fan and radiator fans based on CPU temperature. 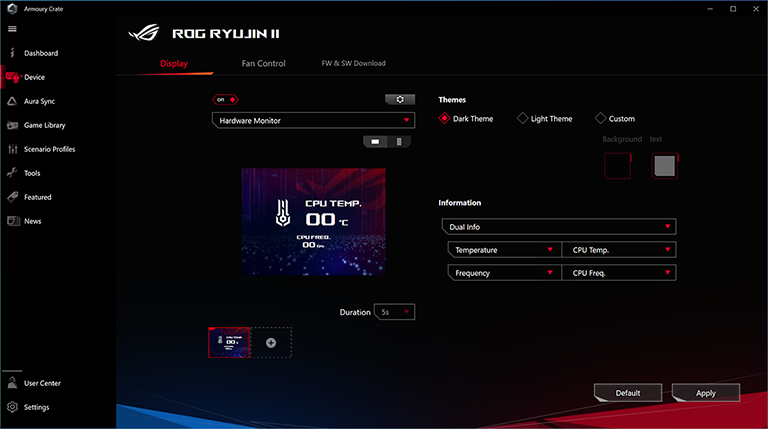 Comprehensive fan speed management is joined by a range of display options that cover most of the basics. The 3.5in screen can be configured to show hardware status including the likes of CPU temperature and frequency, and a slideshow option is at hand to constantly rotate between various stats. Asus's default graphics work well, but users can also upload an image or animation of their own (16MB max), making it easy to personalise your build. The screen is both bright and crisp, yet while the graphics are fun to begin with, for me the novelty soon wore off and I now just have the display configured to show a digital clock.

The RoG Ryujin II 360 is inevitably even more bonkers than the first-gen model, but it does arrive at a time where the market, the industry and in a way the world, feels equally out of kilter. Most of us will balk at the figure, but none of us will be surprised if/when the cooler sells out.