Arctic has served as a go-to provider of no-nonsense coolers for the best part of two decades. The firm's traditional CPU heatsinks are renowned for offering well-rounded performance at agreeable price points, and in recent years the Swiss manufacturer has bolstered its reputation with the launch of award-winning Liquid Freezer all-in-ones.

The first thing that strikes you is the unusual-looking pump. Whereas most rivals tend to rebrand a pump from a select number of ODMs, Arctic is employing an in-house design that's both visually striking and functionally unique. The low-profile assembly has the look of a living thing attached to the top of the CPU, and though it feels plasticky in the hand, we quite like the unorthodox build.

What makes the pump all the more unique is the integrated 40mm fan, which operates at speeds of between 1,000 and 3,000RPM while claiming to lower nearby VRM temperatures "almost inaudibly by up to 15°C." A worthwhile advantage? That depends. We do see lower temps for local motherboard components, but in an ultra-quiet build the fan is audible, and unless you're overclocking to the absolute limit - which hardly any of you seem to do - the real-world benefit is debatable. Still, it's a nice option to have, and if you prefer to go without the additional cooling, Arctic's VRM fan can be disabled by detaching a small cable on the underside. 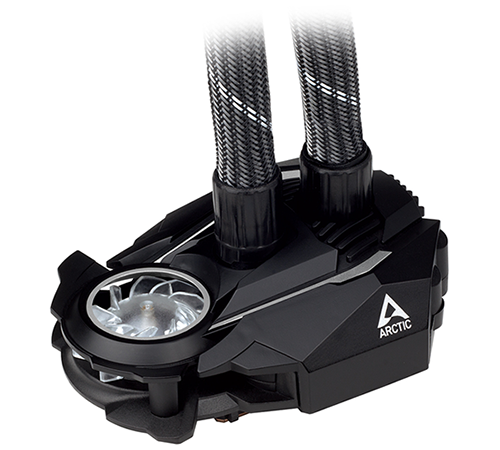 There are a couple of other factors that set the Liquid Freezer II CPU block apart from the competition. There's absolutely no RGB lighting, which seems odd in this day and age but suits us just fine, and at 98mm x 78mm x 53mm in size, you're going to need a reasonable amount of room around the CPU socket. Makes you wonder if Arctic would consider a model without the integrated VRM fan; though the additional cooling does what it says on the tin, a smaller CPU block and reduced noise would make for an intriguing Liquid Freezer II-S.

As things stand, Arctic's wide mounting brackets don't foul any components on our Asus ROG Crosshair VIII Formula, but we suspect it could be a tight fit on other boards, particularly if an M.2 slot happens to be a fraction higher. What's interesting is that the Liquid Freezer II also offers a choice of mounting positions on AM4 platforms. If there's room, the pump can be lowered a fraction to the 'offset' position, which Arctic tells us is "better aligned with hot spots of Ryzen 3000/5000 Series CPU." 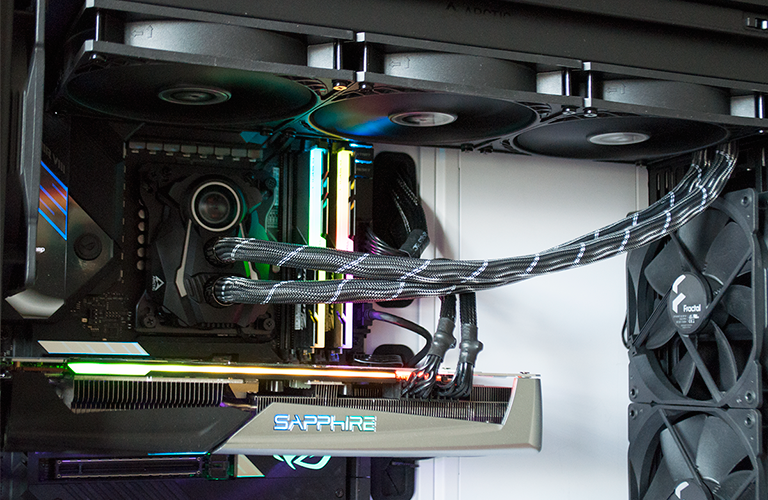 We first mounted the cooler with the plastic film still attached to the copper contact plate, just to see exactly where the CPU interacts, and you can click here to see the result - contact is certainly offset, with the CPU aligning almost exactly to the contact plate's top edge. If we're being critical, it's a shame Arctic doesn't do more to explain some of these options. There's no real documentation in the box, and you'll need to refer to the online manual to see how best to fit the cooler on your specific socket.

Clasp the pump in place and the second thing that catches your attention is just how big the accompanying aluminium radiator actually is. Though you expect a radiator designed to accommodate three 140mm fans to be bulky, the 458mm x 138mm x 38mm dimensions still manages to take you by surprise; it is positively huge, and you'll want to ensure there's sufficient room within your chassis prior to adding to basket. We've just about managed to squeeze it inside our test platform, but the radiator does foul the motherboard's pre-installed heatsinks and as a result doesn't sit perfectly straight; frankly, we're relieved to have been able to get it in at all, as the 450mm of sleeved tubing only just reaches. 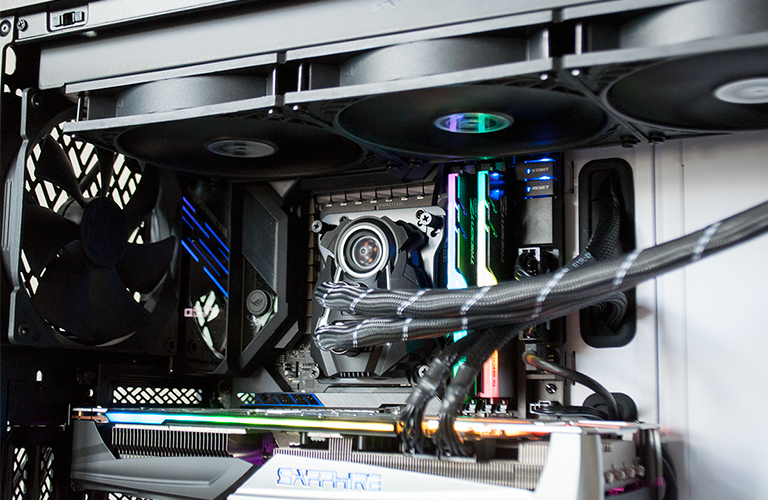 Sheer size is an important consideration, yet Arctic does well to simplify overall installation by taking a clean approach to assembly and cabling. Right out of the box, the three Arctic P14 PWM fans are pre-attached to the radiator and all cables are routed inside the sleeved tubing to the CPU block. The tubing does look a little thick as a result, but the upside is that a single four-pin PWM cable emanating from the block is the one-and-only connection that needs to be made. That very header will use PWM control to dynamically adjust the speed of all four fans (VRM plus three radiator) as well as the pump. Nice and easy, though those who prefer to tinker may lament the inability to fine-tune every individual element.

Last but not least, the bundle includes enough MX-4 thermal paste for at least a couple of mountings, and Arctic has moved to address one of the Liquid Freezer II's few shortcomings by extending the warranty period from two years to six, rivalling Noctua and bettering most of its all-in-one competitors. So far so good, but can the giant 420 deliver the performance to match?