Remember when the likes of Corsair, G.Skill and OCZ were known exclusively for their memory products? Seems a long time ago now, and in the intervening years each company's fortunes have been closely tied to how successfully they managed to branch out into other potentially lucrative product categories.

G.Skill has taken a slow-and-steady approach, with the firm's portfolio gradually growing to include SSDs, gaming peripherals and, as of now, CPU coolers. A somewhat inevitable progression, but with the market for coolers already brimming with established competitors, can the Taiwanese manufacturer deliver the same level of quality as its high-performance system memory? 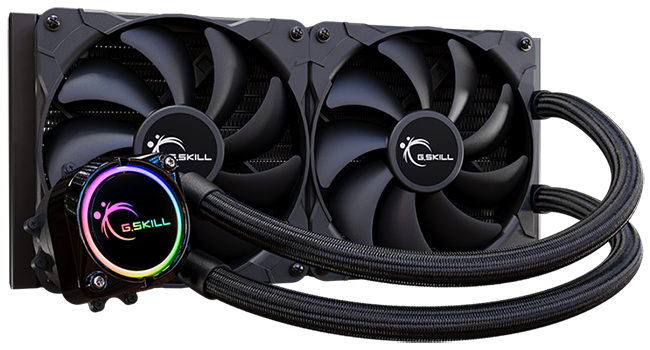 It comes as no surprise to find that closed-loop liquid coolers comprise G.Skill's initial foray, with three models available at launch; the Enki 240 ($130), Enki 280 ($150) and Enki 360 ($180). Retail availability appears sketchy at the time of writing, particularly here in the UK, but we expect the 280mm review model to arrive on our shores carrying a fee of around £130, putting it right up against the well-received be quiet! Silent Loop 2.

Tough competition, yet these are 280mm AIOs with different ambitions. Whereas the be quiet! aims for whisper-quiet acoustics, the G.Skill is described as "a performance-focused water cooler" and is specifically tuned for the lowest possible temperatures. To that end, there's a laundry list of marketing points designed to tempt the more eager enthusiast. 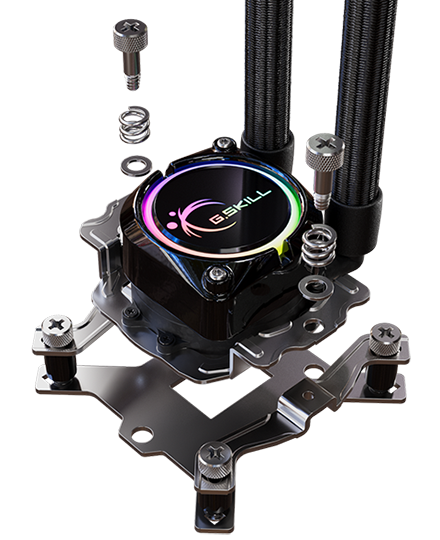 Key features include a "custom-tuned convex cold plate design" that touts stair-shaped micro fins intended to optimise heat transfer between the CPU and copper contact plate. The 312mm x 140mm x 27mm radiator is also upgraded with a "high-density piping design" that we're told results in half-a-dozen additional pipes to a standard 280mm solution. Sounds helpful, as does the 420mm of sleeved rubber tubing between radiator and CPU block which features an 8mm inner diameter to maximise flow rate, as well as a thicker wall to reduce coolant evaporation.

Point is, G.Skill has paid a lot of attention to performance, but as a result some of the everyday conveniences have been overlooked. There's no splitter cable included in the bundle for conveniently attaching both fans to a single motherboard header (the same is true of the triple-fan Enki 360), the silver mounting kit clashes with the black CPU block, and without a dedicated RGB controller those lacking a compatible three-pin synchronisation header are stuck with the default rainbow effect. 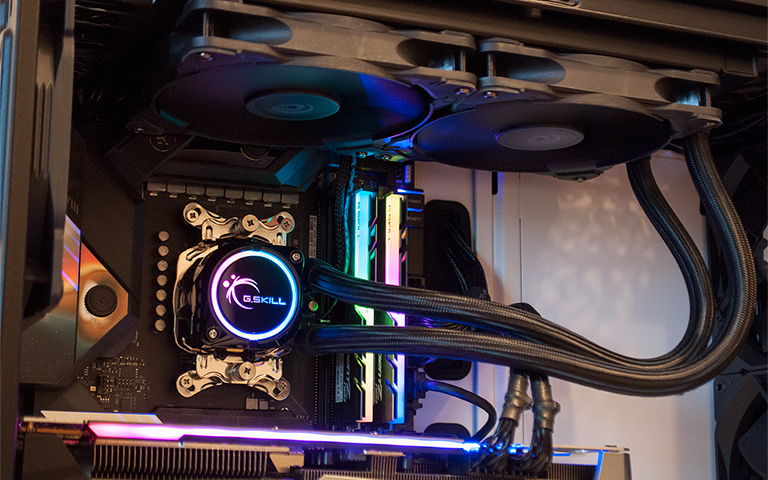 Rival all-in-one solutions have upped their game in terms of refinement, and in contrast the Enki 280 feels like an old-school implementation designed to lower temperature at all cost. Take, for example, the thermal paste. There's a thin layer of white paste pre-applied to the cooler (which sadly was spoiled during transport on our review unit), but G.Skill actually recommends using the alternative blue 'server-grade' paste supplied in the bundle. We wonder how many users will misinterpret that guidance and end up mistakenly using both.

Installation isn't quite as straightforward as other all-in-ones, as the mounting kit entails a fair few individual components. Clamping the CPU block to the brackets on our AM4 test platform requires two sets of washers, springs and screws that are a tad fiddly to hold in place, but our biggest gripe is that the sheer size of the silver mounting hardware looks ungainly alongside the otherwise compact 57mm x 57mm x 39mm block. Nitpicking somewhat, the two visible screws on the top of the pump head also detract from the overall aesthetic, and two of our eight radiator screws failed to bite. 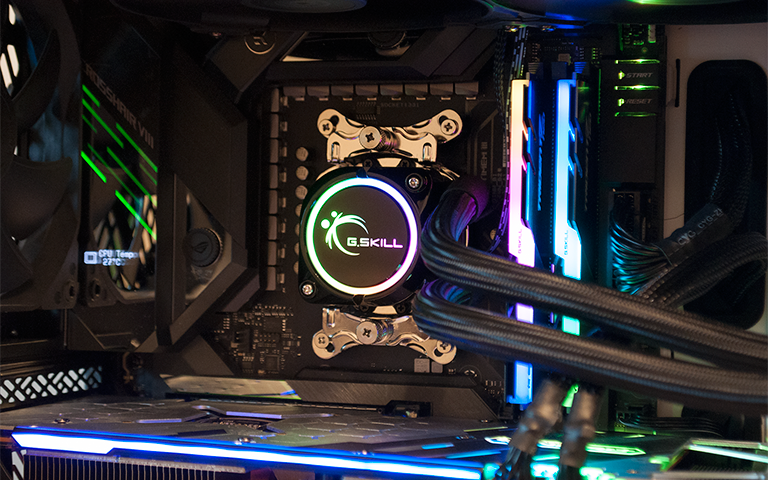 G.Skill's RGB illumination is bright and even, but if our experience is anything to go by, you're likely to hear the cooler more than you actually see it. The pump connects via a four-pin header and at full speed operates at a noisy 5,500RPM. Similarly, the four-pin, nine-blade 140mm fans aren't the quietest and are overly eager to ramp-up to top speeds, resulting in out-the-box noise levels that are noticeably higher than rival solutions.

High on cooling performance and short on overall refinement is our initial impression, but it is worth pointing out that the Enki 280 is backed by a five-year warranty as standard and supports all the latest Intel and AMD sockets. There's even a Threadripper mounting kit included in the box, though given the size of the contact plate in relation to AMD's massive TR4 socket, it isn't a combination we'd recommend. Let's now take a look at real-world results before coming to conclusion.