MSI may be best known for its motherboards and graphics cards, but success in those fields has allowed the Taiwanese manufacturer to branch out considerably. These days, it's possible to kit out a high-end gaming setup with all sorts of MSI gear, ranging from keyboards and mice to monitors and even gaming chairs.

A lesser-known category is PC chassis, in which MSI has over a dozen models to choose from. One of the latest additions is the MPG Sekira 100R, priced at £120 and in for review today.

It is quite clear that Sekira 100R is intended as a visual complement to your other MSI hardware, and the firm isn't shy in stating the MPG series "brings out the best in gamers by allowing full expression in colour with advanced RGB lighting control and synchronization." We're too old and weathered to read into such hyperbole, but while RGB illumination isn't anywhere near the top of our list of chassis priorities, we will admit the mid-tower box is easy on the eye.

Dimensions of 420mm (D) x 215mm (W) x 475mm (H) are reasonably petite by modern standards, and most of the aesthetic flourishes work well. The split front panel, in particular, has a neat, almost retro feel about it, with the aluminium brush-effect section contrasting nicely with the transparent area below. A strip separating the two is, of course, lined with RGB lighting, while the company logo illuminates to complete the effect, and though the bezels on the both the front and side panels are a little thick, MSI's tinted windows do a fine job of showcasing the interior.

It's a good-looking piece of kit and build quality is decent, too. There are few visible seams, everything fits together snug, and an 8kg total weight feels reassuring. Better still, MSI hasn't skimped on the top I/O panel, which lines the front edge and includes a large power button, reset, USB-C, two USB Type-A, a pair of audio jacks and a button to cycle through the preset lighting effects. Just about everything you'd expect, and it's good to see the number of USB ports hasn't been sacrificed for the sake of the newer Type-C.

Going purely by the spec sheet, Sekira 100R has plenty going for it. In addition to looking the part and being well-stocked in the I/O department, there are seven expansion slots, two 3.5in hard-disk bays in a cage at the end of the shrouded PSU compartment, two 2.5in SSD trays (one atop the PSU shroud, another behind the motherboard tray), and more rubber-grommeted cable-routing holes than you're ever likely to need. 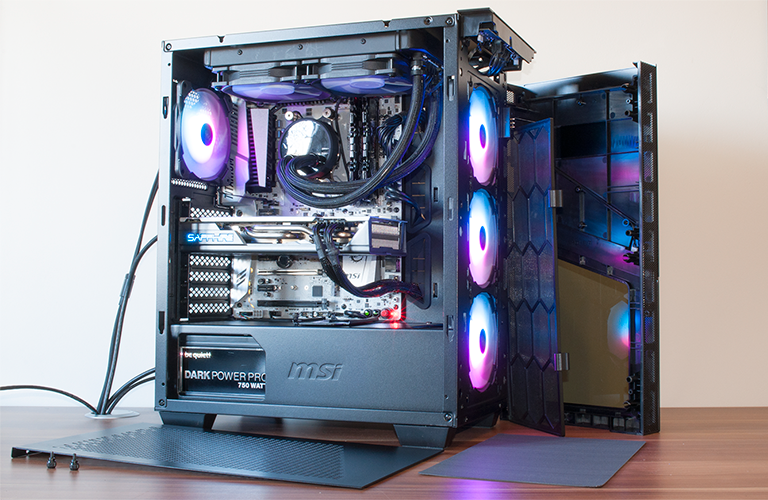 Clearance is defined as 340mm for graphics cards and 170mm for CPU cooler height; mini-, micro-, regular- and extended-ATX motherboards are supported, and cooling really shouldn't be a problem seeing as there are four pre-installed 120mm aRGB fans (three front intakes and a rear exhaust). Choose to expand on that with a radiator and you'll find the top of the chassis can house a pair of offset 120s or 140s, while the three 120s at the front can be swapped for two 140s if you prefer. Ample room for expansion, and we like the fact that the supplied fans and front-panel lighting are hooked-up to a control board around back, allowing all the illuminated elements to connect to a single aRGB header on your motherboard.

Creating an eye-catching rig is all but guaranteed, particularly if you're heavily invested in MSI's Mystic Light ecosystem, but the build process itself could be made more user-friendly. Most bemusing, the side panels can't be removed without taking off the mesh top panel first. Two thumbscrews allow the top section to come away, and only then can you slide the sides up and off their rails. A strange arrangement that we've not seen before, and while it does result in side panels that are free of unsightly thumb screws or fixings, it feels odd having to remove both the top and side just to get into the case. 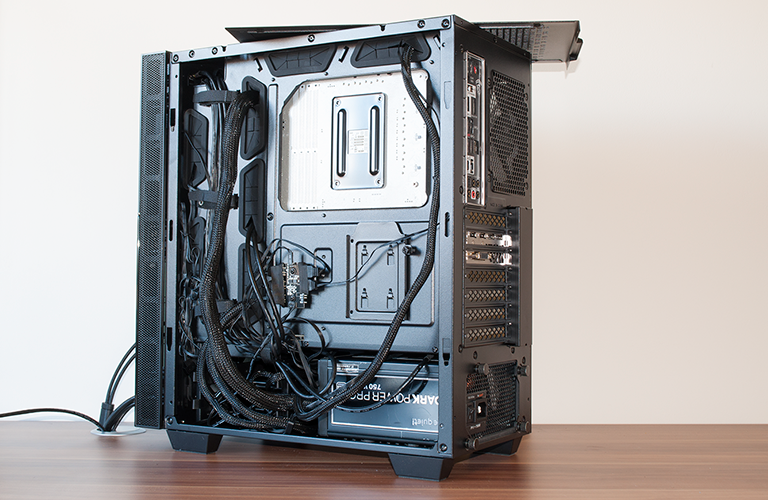 As with most RGB-illuminated enclosures, cabling can be somewhat messy. Each of the four fans is pre-plumbed to the control board for synchronised lighting, but additional three-pin cables need to be attached to the motherboard. Fortunately, given that there are four fans as standard, MSI includes a three-way splitter, allowing for four fans via two motherboard headers. Still, a couple more tie-down points wouldn't go amiss, and if your power supply is as large as our Dark Power Pro, we suspect you'll want to remove the hard disk cage for a little extra wiggle room.

Elsewhere, filtration is decent throughout. There's a magnetic filter sandwiched between the roof of the case and the mesh top panel, a full-height filter behind the removable front panel, and a small piece inserted in tabs directly beneath the PSU. The mesh sections to the side of the front panel are also reasonably wide, suggesting that airflow won't be entirely restricted, but let's run the benchmarks to see exactly what's what.