Juggling such an array of build possibilities could be an issue, yet Fractal handles just about every element with care and attention. Each of the six 2.5/3.5in drive sleds is made of metal, lined with rubber dampeners and adjustable to a choice of slots on the storage column. The two 2.5in SSD trays are attached to the rear of the motherboard tray by default but can be relocated to the top of the PSU shroud if you prefer. Better yet, if optical drives and hard disks are too old-school for your liking, the panel that covers the storage column can be entirely recessed, expanding the interior into what Fractal calls the Open Layout.

It's an easy switch to make, and though the I/O cables do become visible, the room in the front of the case combined with the cutout in the PSU shroud create plenty of liquid-cooling potential. Speaking of cooling, Fractal includes a trio of X2 GP-14 140mm fans as standard alongside a Nexus+ hub. Said hub sources power from a Sata connector, can accommodate half-a-dozen three-pin fans as well as a trio of four-pin, and regulates speed from a single PWM header on the motherboard. 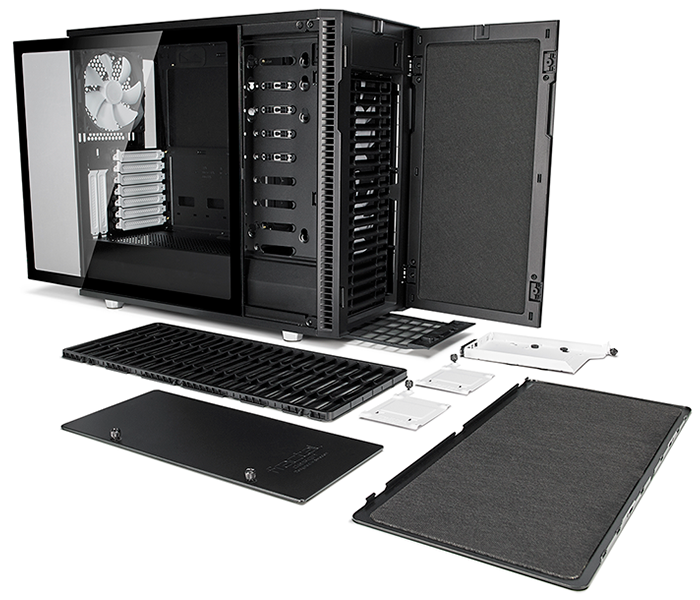 Choose to take the liquid-cooling path and you won't be left wanting. There's room for up to a 420 in the roof, up to a 360 in the front, and up to a 280 on the base. Thankfully, the fiddly top ModuVent covers of the Define R5 have been replaced by a third-generation solution that gives users the choice of a steel cover, a full-size vent or both. It is the best ModuVent to date, and getting access couldn't be easier as Fractal has added a quick-release button to the rear. Hit the switch, lift the lid and you have full entry to offset radiator mounting points and a dedicated hole for tubing.

What else does the Define R6 manage to cram in? Provisions for a vertical graphics card, of course. In addition to the seven regular expansion slots, two vertical slots are available though do be aware that the required riser kit is not included in the bundle. Much like USB Type-C, Fractal is offering an optional Flex VRC-25 kit, to be priced at around £35, whose 210mm ribbon cable runs neatly from motherboard to a PCIe slot fastened securely to the top of the vented PSU cover. The whole assembly does what it says on the tin, though we remain unconvinced by real-world usefulness - does the graphics card look better? Perhaps, yet our Radeon RX 580 also tends to run warmer/louder in this orientation. 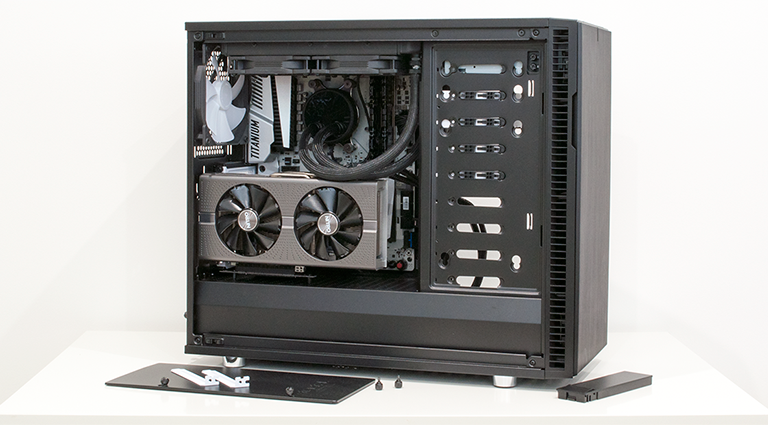 Installing our AMD Ryzen test platform proved rewarding as there are plenty of neat touches throughout. As expected from a Define Series enclosure, the front door is reversible, allowing for left- or right-handed orientation, and opens to reveal the 5.25in bay and a couple of filters. The intake filter is easily removed for cleaning while the full-length bottom filter pulls out from the front for easy maintenance.

Easy-to-access filters on the top, front and bottom? Yes please, and there's more goodness in the form of high-density, sound-dampening material lining each of the top, front and side panels. There isn't a lot this case doesn't do; a CPU heatsink can stand up to 185mm tall; graphics cards can measure up to 440mm in length; and 23mm of clearance behind the motherboard tray is acceptable given that the rear side panel is hinged for easy alignment. Heck, even the front-panel connectors are sleeved together for added cleanliness. 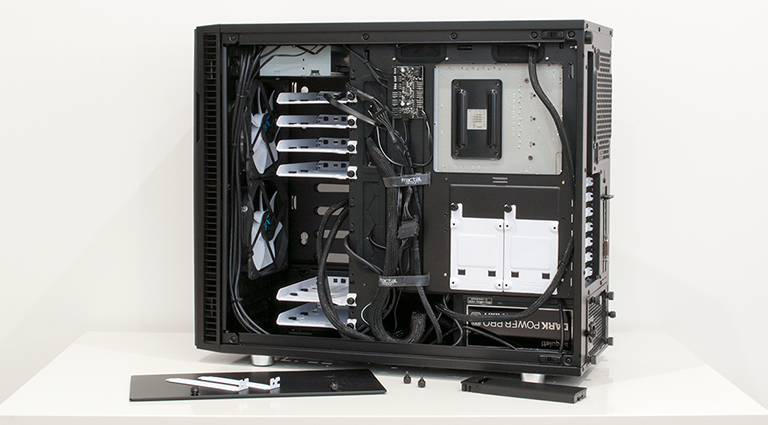 Cable management is decent, with good access below the motherboard tray, rubber-grommeted holes both to the side and above, as well as multiple tie-down points and a pair of Velcro straps. The fan hub does create some expected clutter, but there's ample space to keep excess wiring out of view.

Define R6 strikes so many of the right notes that the omission of out-the-box USB Type-C is particularly irksome. Our tempered glass review sample with optional vertical GPU mount has visual appeal at a combined cost of roughly £170, yet we may well prefer the standard case in blackout or gunmental with the Connect D1 I/O upgrade for a more palatable £145.