EVGA has been dabbling in PC chassis since 2013 but the firm's efforts thus far have been niche solutions aimed at specific corners of the market. The £170 Hadron Air targeted small-form-factor enthusiasts, and last year's gargantuan DG-87, initially priced at £220, aimed for the power user seeking full-tower flexibility.

There's room in the middle and EVGA has filled that void with the DG-7 Series. Priced from as little as €55 and available in a choice of four models plus two colours, the mid-tower range is designed to appeal to a wide range of mainstream users. The four DG-7 variants all retain the same underlying frame but are differentiated by features such as glass panels, RGB LEDs and the number of included fans. A complete specification comparison is available by clicking here and we have the range-topping DG-77 in for review today.

As the showpiece of the range, DG-77 measures 483mm x 211mm x 477mm and touts tempered glass on three sides, four bundled fans, RGB lighting and support for EVGA K-Boost. The price tag swells to €130, with UK retailer availability expected soon, and if you've decided that this is the particular model for you, there's a choice of black or white colour schemes.

The allure of lots of glass suggests that DG-77 should be a real looker, yet we aren't enamoured by the external aesthetic. The rear side panel is opaque, making it hard to tell that it's actually glass, and the front side panel is tinted to such an extent that it's hard to see what's actually in the case

Then there's the branding. The backlit EVGA logos on the side and front work quite well, though we'd prefer just one of them; however the DG-77 and distracting white border on the side panel are an eyesore. The lettering, thankfully, is applied as stickers so can easily be removed (EVGA includes stickers in a choice of other colours if you prefer) but the white border is tricky to scrape off without scratching the glass.

EVGA's branding is a little OTT for our liking - even the thumbscrews are blazoned with Es - and the exterior cladding doesn't appear to offer any genuine benefit. In fact, it's quite the opposite. The glass is too dark to serve as a suitable window, the use of floating panels on all four sides results in thumb-screw overload (16 need to be undone to strip the chassis down), and the plastic covers on the top and back cheapen the overall feel. The plastic back panel is perhaps the most confusing of all - we've no idea why it's there, other than to restrict the rear fan vent, perhaps?

Aesthetics are of course a personal preference - some may love the DG-77's glass facade, while others may be drawn to the white variant - but the exterior make-up is certain to divide audiences. Similarly, the top I/O panel will elicit a mixed response. The ports are arranged alongside yet another EVGA logo and include a backlit power button, two USB 3.0, a pair of audio jacks, reset and a manufacturer-specific K button.

The latter, signalling K-Boost, allows the user to set a compatible graphics card to maximum boost clock at the touch of a button. Think of it as one-touch overclocking, but you'll need to a) own an EVGA GeForce card and b) register to download the firm's DG-Tuner software utility. Unfortunately, and contrary to the official specification sheet, there's no sign of USB Type-C. 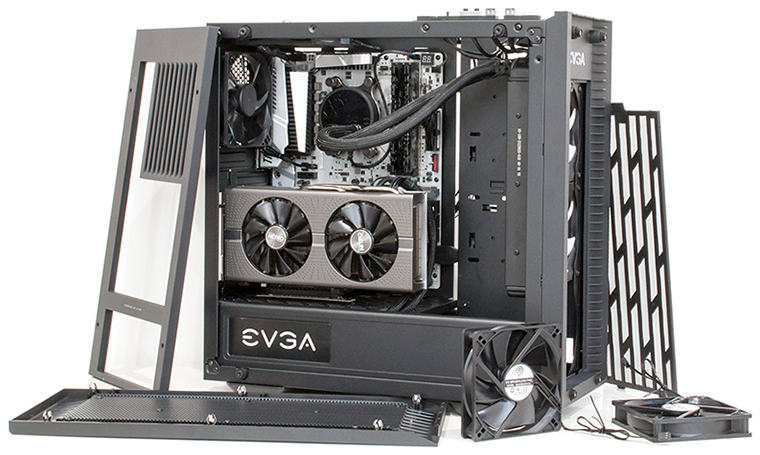 On the inside, the DG-77 continues to frustrate with some really good decisions and some that are nothing short of bizarre. Take, for example, the PSU dust filter. It isn't a pull-out solution as you'd expect at this price point, but rather a small cutout of mesh that awkwardly attaches to the bottom via eight notches. The top panel has no removable filter, and though there's room up here for a trio of 120/140 fans, the frontmost mount is obscured by I/O cables and an RGB hub. If you're thinking of putting a radiator up here, you may be out of luck - EVGA's mounts are central rather than offset, and we couldn't install our 240mm liquid cooler in the roof without fouling the motherboard heatsink and memory.

These are surprise omissions for a flagship mid-tower, yet there are features that work well. The front trio of 120/140 mounts offer room for up to a 360mm radiator, and the cutout in the PSU shroud ensures that thickness isn't a problem. Heck, a push/pull configuration would fit easily, and four bundled 120mm fans help realise that opportunity. As standard, these are configured as a rear exhaust, a top exhaust and two front intakes. The caveat to the front intakes is that the glass panel is likely to obstruct airflow, but if you prefer to maximise ventilation, the case looks just fine without the front fascia.

EVGA's top-mounted RGB hub has six available headers (two of which are occupied by the front and side logo illumination) and power is sourced via Sata. The lighting options are configurable via the aforementioned DG-Tuner software, yet what sets the DG-77 apart from others in the range is the inclusion of a vertical GPU bracket as standard. The kit includes a riser cable and is easy to fix to the PSU shroud, but while the graphics card looks good in situ, it is barely visible when the tinted side panel is attached. 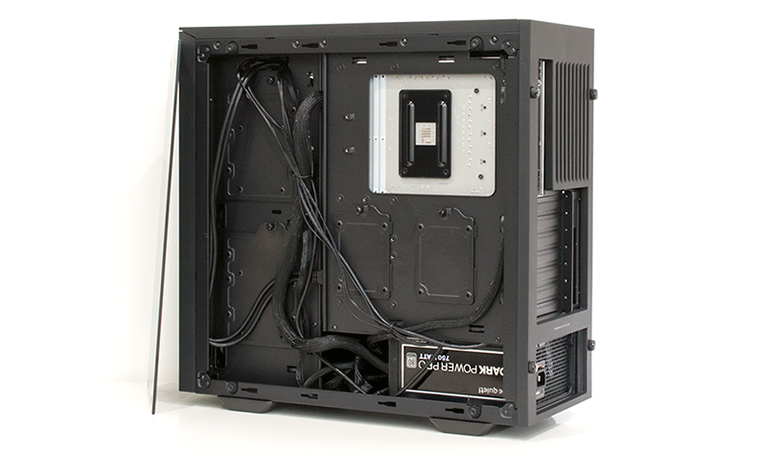 Notice the absence of storage in the main cavern? That's because the quartet of drive trays are tucked around back. Two 2.5in and two 3.5in is your lot, yet given the availability of M.2 slots on most motherboards, four bays ought to be plentiful for most users. Do note that while all four trays are metal, they are neither tool-free nor fitted with rubber dampeners to help soak-up vibration. Likewise, the PSU sits on metal as opposed to rubber pads.

Building into the case was for the most part trouble-free - the tight gap beneath the motherboard tray being the only slight point of contention - however cable management isn't the best. Offsetting the two internal panels provides plenty of space for cables to pass from back to front, but we'd have preferred rubber-grommeted holes that help maintain a tidier finish. DG-77 is lacking the attention to detail we'd expect from EVGA, though the manufacturer does back the enclosure with an above-average three-year warranty.